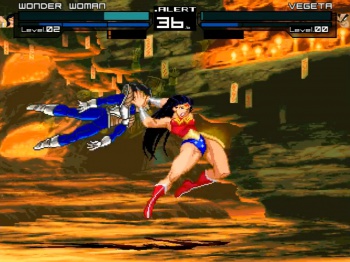 Salty Bet is something of an online gambling den, only instead of illegal cockfights, it invites spectators to bet on the results of bizarre fighting game mashups.

With the increasing prominence of eSports within the fighting game community, it was only a matter of time before someone offered spectators a chance to bet on the outcome of various matches. This being the Internet however, simple bookmaking techniques might seem a bit dull when contrasted with endless reams of pornography and cute cat pictures. Thus, Salty Bet takes things in a different, appropriately eccentric direction.

Here’s how it works: Spectators hoping to bet on matches create an account at the Salty Bet website. Once your account is established, you’re given 400 Salty Bucks to wager on the site’s battles as you see fit. There’s no actual money exchanged, which is probably a good thing given how unpredictable and often baffling the fights seen on Salty Bet can be. Whereas you’d expect to see Street Fighter matches and the occasional Mortal Kombat bout, Salty Bet relies instead on MUGEN, the infamous fighting game platform that allows users to create their own custom characters. As a result, it’s not uncommon to see Marvel Comics’ Punisher character throwing down against Rock Howard from Garou: Mark of the Wolves, or a wildly racist riff on Iron Man. The characters and potential matchups are limited only by the creativity of the MUGEN community.

Until recently all of the matches seen on the Salty Bet livestream (hosted, naturally, by the fine people at Twitch) had featured actual human players, but the site has just switched to using computer-controlled fighters. The betting system remains the same, but now would-be oddsmakers can ignore the human element of the equation and focus entirely on … character popularity? Momentary impulse? Gut feeling? There’s no good way to bet on fake fighting games, but it’s all fake money anyway, so who cares?

If you’re intrigued by the idea of Salty Bet – and you should be; I’m currently watching a great match between Wonder Woman and Vegeta – you should really pay the site a visit. It’s the kind of unrefined electronic chaos that the Internet is so very good at spawning, and if you’re into fighting games, anime or comic books, it should at least provide a few minutes entertainment.