Sequels used to mean something. They were the promise of a genuinely fresh re-imagining of my dearest gaming experiences. Now they feel more like a chance to tinker with marketing and demographics, rather than something to stretch mind and dexterity in unexpected directions.

It’s no bad thing that successful games win bigger-budget renderings of their ideas. But I wonder if the pressure of establishing a franchise means that opportunities are being missed. This up-scaling of ideas, by its nature, doesn’t allow space to take risks with divergent ideas.

Of course, this has been precipitated by the recent Crackdown sequel. The first game took me completely by surprise. I simply hadn’t expected there to be such a pulsating sense of imagination and fun beneath the cel shaded veneer. Sure, at times it felt cobbled together with string and brown paper, but the creativity shone through. And I was more than happy to forgive the bugs for all the opportunistic fun. It was a game with real heart.

Crackdown 2 is a chance to revisit all of this, but without the spark of imagination that made the original so appealing. It’s a good, solid game, an adequate sequel by most standards, but there are no surprises. Playing the game for the first time with friends, I felt a bit stupid for pinning so much hope on what Crackdown 2 could be. My fantastical imaginings of an experience that embraced the co-op horseplay and self imposed challenges outstripped what the game delivered.

I accept that iteration rather than invention is not always a bad thing. I can appreciate how much grander Assassin’s Creed II is compared to the first game. The cinematic moments made my spine tingle, and its scope was awe inspiring. And each iteration of Halo brought enough to the table to make the experience feel fresh again.

But if you come to these experiences shortly after finishing the previous games, there aren’t many surprises here. Sequels used to be a glory box of previously unimaginable encounters in a world where you had spent plenty of time before. I miss the moment of coming back to a familiar game, to be floored by new ideas that make me re-evaluate how to play the game and even what sort of game it is. I know that this is all part of the gaming ecosystem. It’s the nature of the mass market. But when games were more of a niche pursuit we expected much more from a sequel.

I played Bubble Bobble to death. Something about the platforming simplicity of the chain reactions, air currents and intricately triggered bonuses created an experience for me unlike any other. There was a world of tricks and secrets to learn as people established their pecking order on the machine at our local arcade.

Then, much to my horror, one day the machine was wheeled away. In its place was Rainbow Islands. Sure, this was obviously still a platform game, but it was so different to the first game it took me a while to realize it was a sequel. Levels were now traversed from top to bottom. The aim was to get to the goal rather than kill all the enemies. But perhaps most confusing was the entirely new weapon at Bob and Bub’s disposal.

This risky new play mechanic worked, and I took the leap into this new world. As I played the family heritage was clear. The same structured Rainbow enhancements matched the distance, speed and multiple Bubble power-ups. The same cavernous world of bonuses lay in wait to be discovered by conscientious players. And the same steady creep of difficulty kept us coming back again and again. 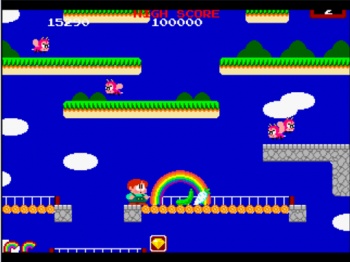 Some years later, came the next game in the series. By now play had moved to consoles, but the encounter with a re-imagining of that Bubble Bobble seed was just the same. Parasol Stars took us from rainbows to umbrellas, and from vertical to side scrolling levels. It took some time to get my head around, but again the inheritance was clear.

It’s interesting that I still go back to each of these games separately. They are distinct experiences that each offer something unique. The more recent knowledge that this year’s franchise will be eclipsed by the sequel is kind of odd by comparison. As soon as the new game is out the previous version is often redundant, each overshadows the previous game almost entirely. These iterative sequels not only limit their imagination of new ideas, but also restrain themselves from cutting out extraneous elements. They are compelled to include everything that went before.

I really enjoy it when a new Bond film takes a different narrative path, or casts 007 in a more questionable light. I have favorites in the Bond franchise not because they encapsulate everything that went before, but because they are artistically and imaginatively unique.

Away from the iteratively cursed sequel, the same is true for some games. Timesplitters is a fascinating example, and perhaps not one you’d expect. Timesplitters 2 delivered an experience that continued the themes of the first game while innovating gameplay and story. Timesplitters 3 is where we see the real departure with the single player story introducing time traveling elements where the player helps themselves from the future.

Although not a sequel by name, Free Radical went on to develop another step into unusual first person shooter territory, Haze. And yes, I know it wasn’t all that well received, but if nothing else it introduced genuine innovative ideas, as well as departing from some of the team’s favorite stock in trade tricks – and I actually quite liked it. Even though the last two games disappointed in term of delivery, I’m still excited any time the mention of resurrecting Timesplitters 4 crops up because it promises to try and genuinely move things forward.

It is telling that people have a favorite Timesplitters game. Rather than these sequels eclipsing the previous version, they are much more distinct and each offer a different experience. Whether it’s the craziness of the first game, the single player of the first sequel, the time traveling of Timesplitters 3 or even the heady ideology of Haze there are clear reasons to own each of them. And, as you may have heard me say before, Timesplitters 2 is still the classic version so far.

If I could change anything about videogame sequels it would be to inject a bit more courage of their convictions. When games grant themselves permission to do away with superfluous elements as well as space to move imaginatively into new surprising territory, we are all the richer for it. It used to happen a lot more than it does, but if you know where to look you can still find some great examples of a really ballsy next step.

Whether this is the new art style of Wind Waker, the ideology of Haze, or the radically slimmed down Advance Wars: Days of Ruin it takes a lot of courage to do something new. So perhaps we should think twice before dismissing these daring departures out of hand?

Game People Calling: Reviewers Should Have Experience, Not Expertise