Game soundtracks used to be whatever the developer could squeeze into the remaining system memory once they had gotten the game running. But now, our ever more powerful modern consoles mean that games can do whatever they want for their musical backing.

While I enjoy a strong videogame score as much as anyone, I do worry that this has made it too easy for games to simply copy films. It used to be a real skill to squeeze ten hours of music into a few bytes of memory that resulted in unique and creative solutions.

You could tell if someone was playing a C64, Master System or Game Boy game just by the synthetic sounds it was emitting. As much as visuals or gameplay, it was a distinctive element of the experience. Maybe we should think twice about discarding it.

Some games do better than others of course, and use their soundtrack not to just tick orchestral boxes, but to intelligently interweave new and rare audio through their experience. Cat Spencer has recently written about the Alan Wake soundtrack in these terms. Her review of the Boxed Set soundtrack has plenty of praise for the intelligently unusual music that adds another dimension to the game:

Alan Wake has a soundtrack that mixes alt-rock, psychedelia and pulp-twang with Petri Alanko’s haunting orchestral landscapes. Although more noticeably uneven when out of the game, the mix manages to create a pleasurable and less earnest listen.

The soundtrack is available in the Alan Wake Limited Edition box set. Not only nicely packaged in a faux book box, it also comes with a real novel, the game itself and plenty of other goodies. The soundtrack is on a CD and as such will play on any CD player. My mp3 player seemed to struggle to bring up names for each track, so I had to add them manually.

Alanko has created a musical grammar for Alan Wake that reminded me of those sad unfolding 90’s dramas. The solitary piano and shivering violins avoid becoming too stereotyped though, as does the brooding development of darker tones.

A Winter’s Dream sets us up for forthcoming disasters and sets out Alanko’s stall – a sweeping epic backdrop to play against. Although never becoming choral, these recreate similar emotions to Howard Shore’s Lord of the Rings orchestration.

Welcome to Bright Falls is most iconic offering here, and reoccurs most often in the game – as well as plenty of trailers over the last few years. The strings take a lead throughout but are book-ended by piano and woodwind that combine to create moments shrouded in real emotions.

The Clicker is the shortest of the tracks and seems to be more functional than fully formed. Here, the album gives away its videogaming remit. Tom the Driver then dials things down as we move from the sweeping movements of the big screen to something much more like TV. And it all works well to signpost the album’s change of gear towards a more modern varied crescendo. 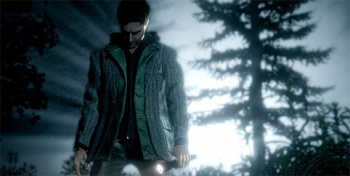 Nestled amongst these orchestral pieces are some left-field modern tracks. It would have been easy for Remedy to reach for familiar or well known pieces to punctuate its game, but instead there has been considerable work tracking down these rare and underrated songs.

Young Men Dead from Black Angels is real neo-psychedelia with an energy that makes you want to reach for the controller again. We move from this back to Alanko’s work, but not before being stopped off at the amiably droopy vocals of Anomie Belle’s How Can I Be Sure.

By keeping the minor theme, both these tracks create a real sense of soulful blues. Where the grand motifs of Alanko touch on something disturbing, these modern songs keep that feeling rooted in reality.

Barry Adamson is case in point, with a gravely lyric and blues lick, his Beaten Side of Town’s half-spoken half-sung narration brings to mind front-porch improvisation as much as anything intentional. This is a real rock-opus, story within a story, and in the game a happy break from Wake’s concerns about the night.

The plucked melody of Dead Combo’s Electrica Cadente stands out amongst this company. It made the hairs on my neck stand up as its staccato strumming and electric lead called me into a world of 70’s James Bond mystery.

We are returned to Alanko’s safe hands to finish. It left me impressed by the balance between well chosen original tracks and the commissioned material. It’s a combination that feels much more alive and human than some more earnest videogames.

But as an album this mix still jars a little. I’d like to be given the space to journey into one or other of these musical camps. With the upcoming CD release of the score this will soon be possible, I only hope they also do right by their other musical choices and offer a CD of the modern music too.

With Petri Alanko’s orchestrations now available on their own CD, Cat has been calling for a similar release for the modern tracks. I know what she means, for me it’s these that really take me back to moments in the game, rather than the brooding classical backing.

Perhaps a way for videogames to honour the uniqueness of their synthetic musical beginnings is to be known for hunting down the best underground music and bringing it to a wider audience.

I’d love to hear the whimsical tones of Connor Oberst popup in Fallout: New Vegas, but what music would you tip for inclusion in this Holiday’s big releases?

Game People Calling: Reviewers Should Have Experience, Not Expertise