We game reviewers like to think of ourselves as experts, but in fact that’s kind of impossible. We can be experts in something specific like gaming, but because that overlaps all sorts of other areas of life we soon find ourselves out of our comfort zone.

This is when our life experience should carry us through. There should be a change of gear from authority to opinion as we venture beyond the bounds of our knowledge. But that is hard to do and more often than not we simply continue the same vein of expertise.

Most of the time, our shortcomings aren’t noticed because we can stick to the games we know. But then, a game comes along that forces us to engage with something new. The danger, in that moment, is that we decide to borrow language from those disciplines without really understanding them. It’s then all too obvious that we don’t really know what we are talking about.

I don’t know much about cricket, but I can tell from the comments on this post in the Guardian that the writer has ill-advisedly edged into unknown territory.

Readers have come to the review because they like cricket and want to know if International Cricket 2010 is a decent videogame rendition. “How on earth do you fine cut to mid on?” they ask of the reviewer’s unusual use of these terms. “This is a cricket game for cricket fans, you wouldn’t buy the game if you didn’t like the sport so why get some guy who is clearly clueless about cricket to review it?” another commenter adds.

It’s so easy to bring in a quote or some terminology from an area you know nothing about to add some bite to an article. So here’s a review from someone who not only understands cricket but plays it regularly, David Kenson.

International Cricket 2010 has me caught in two minds. It offers significant improvements to the genre in terms of realistic perspectives and intelligent tactics, but the experience is hamstrung by a limited single player mode. I’d love to have been bowled over, but as it is I’m remaining fairly stiff upper-lipped.

With the focus of the British sporting media having switched swiftly from England’s fairly predictable World Cup exit to Andy Murray’s failure to secure his first Men’s Singles title at Wimbledon, I can’t help but feel a little sorry for England’s cricketers, and cricket in general for that matter. After all, our boys have just completed an impressive ODI series win against the Australians, winning the first three matches to secure victory before the Aussies could get a foothold.

The niche appeal of cricket is perhaps no better illustrated by the fact that Codemasters saw no reason not to delay the release of International Cricket 2010 until after the World Cup, presumably resigned to the notion that cricket fans will find it regardless and that detractors are beyond conversion. Certainly the latter seems to have been confirmed by several early reviews I’ve seen.

However, while I’ve not always been a huge fan of cricket games, and harbored reservations about previous Codemasters offerings Ashes Cricket 2009 and the Brian Lara series, I have to say that I found IC 2010 pleasantly surprising.

International Cricket’s main boast is the new over the shoulder Action Cam which hugs the camera to the batsman/bowler giving us something close to their view. This new perspective, like the new first person view in Tiger 11, gives the action a more realistic feel, and breaks out from the dull constraints of the ubiquitous broadcast camera-angle.

Like anything new, Action Cam has strengths and weaknesses. While it makes bowling feel more realistic, it also makes it more difficult to see exactly where you are aiming your delivery. Given time though, I developed a much more cultured eye for pitching deliveries right where I wanted them, and I felt the learning process gave rise to a deeper and more satisfying experience than using the usual, simple system. 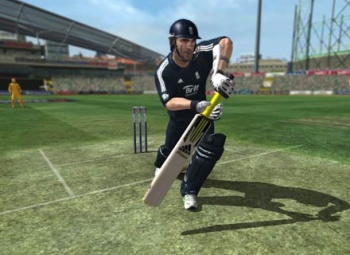 Batting is where the new view really comes into its own. Before each delivery you have the chance to look around the ground, noting the exact position of the fielders and benefiting from a much more spatial conceptualization of the situation than you’re afforded by solely the radar-style graphic. What is really satisfying from my perspective, however, is accurately visualizing the field feeds into an expectation that working the ball into the gaps is a vital part of achieving batting greatness.

It will never be possible to prevent impatient players from trying to hit the ball out of the ground on every delivery, but as opposed to just magically making what appeared to be another well timed slog into an edged or skied catch, this new approach fleshes out a much more convincing way of encouraging ‘proper’ play.

Not only is it possible for bowlers to respond realistically to such batting with a good selection of well implemented options for clever bowling – with the timing, line, length, delivery selection and confidence mechanics all playing a part – but the gameplay properly and accurately encourages and rewards sensible shot-selection and good technique.

Just as in real-life, respecting the good deliveries is essential to building an innings in International Cricket 2010, and stretching the field by dropping the ball into the gaps for singles or swift twos is a key concept in that it infuriates/demoralizes the bowler and creates opportunities for more expansive hitting. Likewise, bowling tightly and setting appropriate fields is key to keeping the opposition’s runs down.

In more general terms, the control scheme is the same as we saw in Ashes 2009. If you skipped that, you might find it slightly bewildering at first, with the instructions making far too much use of the word ‘reticule’.

The quality of the presentation is fairly high, with decent looking menus and impressive rendering of the stadia, pitches and equipment. Realistic looking and moving characters is still a little way behind the best sports titles, but considering the complex and unusual movements that cricket involves, this is perhaps somewhat understand-/excuse-able. I found that the 360 version ran slower than I would have liked, with fielding being the main culprit.

There are also some gameplay and AI glitches which take some of the previously alluded to shine off the ball. Fielders occasionally take an age to retrieve the ball, the computer will appeal for run outs and LBWs that are insultingly far off being out and the stumps behave fairly strangely – run out chances will often flatten all three, but yesterday I was clean bowled without the bails so much as flinching. What is more, catches are still as fiendishly hard to take as they were before, which can be really frustrating. Despite these kinks, however, I’d say the in-game highs generally outweigh the lows.

By far the biggest weakness of International Cricket 2010 is the lack of a proper single player mode. While several game types and tournaments are on offer and more (sadly unlicensed) teams than you might expect (sounds-like squads from Bermuda, Canada, Scotland and the Netherlands all feature), there is no overall progression. Given that Action Cam is at the heart of what IC 2010 has to offer, and yet is not available in two player games (why no split screen?), it is a pretty huge oversight that there is nothing like a career mode to get stuck into.

If you don’t like cricket or cricket games, then you won’t like this game (and why are you reading this?). If you do, then this represents a secure forward-stride in terms of realism and attention to detail, which is certainly worthy of your consideration. Certainly if you play online you will get a lot more out of the experience, with a human opponent and Action Cam providing the best of both worlds. If, however, you’re looking for a solid, offline single player experience, then International Cricket 2010 might point you to a bright future, but disappoint you at present.