I’m as avid a gamer as the next man. But I’m still impressed, and a little shocked, by how much time some of my comrades will invest in the latest videogames. It isn’t just time: These games absorb their creative energy and are granted a central place in their lives.

And of course, why shouldn’t they? Videogames are the most engaging media experience of our age. They entice us in with visual imagery, orchestral sound and intuitive controls – all honed to perfection over the years. They tell stories that rehearse the themes of the old legends and sagas. They are fast becoming the most attractive (and popular) way to spend our leisure time.

But then it struck me, how hardcore is it to revel in all this? With all that before us, it’s not really that hard to be into games these days. Maybe gaming had a hardcore element back when 8-bit and 16-bit tech meant hours of investment getting a game to load before we could play it – I never could get the volume right on my Spectrum 48k. But these days pretty much anyone with half an inkling will find a way into what we call hardcore gaming. And, to quote my favourite Pixar character, Buddy from The Incredibles, “when everyone’s super, no one is.” Perhaps it’s time to leave the concept of a hardcore gamer behind and embrace the broad appeal to the masses of the games we play.

Sure it’s semantics. And who really cares whether we are hardcore, specialist or enthusiasts? But that’s not my point today. I say all this because I think I’ve found a group of gamers who really deserve the hardcore moniker.

These guys and gals spend hours tracking down their gaming prey from a rag tag collection of local stores and half baked websites. They can’t buy electronically, their games have to be physically delivered to them. When it arrives they then have a good half hour reading the manual and setting things up. No tutorials, no flashy graphics; just cards, wooden pieces, dice and a playfield.

OK, so you guessed it, I’m talking about board gamers. For my money they are the real hardcore gamers these days.

The biggest sign of this for me is that they are largely an underground movement. People still think of board games in terms of Monopoly, Chess and maybe Trivial Pursuit. As every hardcore board gamer knows, the truth couldn’t be further from that sterile world of traditional, sedate gaming.

New board games are released almost daily and devoured by a community as voracious as any videogame forum – just check out Board Game Geek. It’s all very reminiscent of the underground gaming days of the late 80’s with the Amiga and Atari St giving birth to companies like Team 17 and Bullfrog. 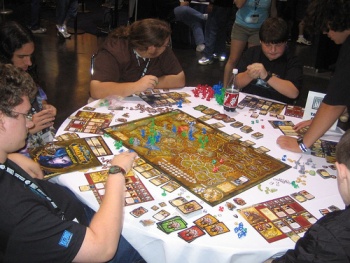 What came as more of a shock though was to discover just how big board gaming is getting. In terms of sales, the big games in this ecosystem sell substantially better than any videogame franchise. Settlers of Catan has sold more than 15 million copies – a figure which outstrips even games like Halo 3. It’s a success that has started in countries with a strong family board gaming history – like Germany – but has spread through Europe, and more recently the US.

It seems to be an interesting and pivotal moment for board gaming. The success of these bigger name games (Settlers of Catan and Carcassonne to name a couple) is drawing attention from a wider audience. Much as we have seen in videogames, this will lead to new companies coming into the market with ideas to broaden their appeal and sell beyond the ranks of hardcore followers – the Wii of the board game.

One route to expand things has been to change the medium. Releasing versions of games on XBLA is a great way to reduce the commitment you need to play the game. There is none of the manual reading and setup time involved with a traditional board game – and players are seamlessly led through tutorials that help them get started. Features can be expanded to play to the videogame audience as boards become animated and rules part of the fabric of gameplay. And online multiplayer and leaderboards extend the experience beyond the living room.

But unlike videogames that can be easily skewed towards a casual market, board games’ tactile, physical nature protects them from such profiteering. Bringing a game to XBLA can’t recreate the experience of sitting down and playing with physical pieces, not least because – more often than not – you can’t actually play locally with more than one player – because of the restrictions of sharing information on the same screen.

The hardcore board gamer is confident in the niche appeal of their hobby. They have won their stripes with long hours learning how to play obscure German creations, and expanding their encyclopaedic knowledge of Carcassonne variants. The hours invested setting games up, only to have them accidentally knocked over, have not been in vain.

It is these very barriers to entry that protect their hobby from being overrun by the masses. And it’s interesting that very few gamers these days would have the patience or perseverance to really be able to call themselves a hardcore board gamer.