I’m a sucker for a sad ending. Show me a chick flick or rom com and I guarantee tears. Maybe that’s why I like games that pull at my heart strings – those unusual experiences that aren’t afraid of dealing with death, loss and abandonment. Amongst these, there are a few that stand out due to their mature handling of the one subject that none of us can escape: loss. These games, rather than depress, leave me feeling just a little richer and wiser.

I’m going to look at experiences that have meant something to me personally – Shadow of the Colossus, Final Fantasy VII, Metal Gear Solid IV and Fable 2. As we go, I’ll need to dig into what makes them tick, so there will be spoilers aplenty; be forewarned if you’ve not played them through yet.

Shadow of the Colossus – Layered Loss

Shadow of the Colossus is one of those games that had to be included. From the slow, lonely journey before the game starts, to the discovery of the abandoned environments and the eventual death of your companion, loss runs deep through Team Ico’s veins.

Although many know and have written about the climactic sacrifice, there has been less said about the wider tapestry. This is a game that engaged me with loss on a number of levels that combined to create some powerful feelings.

First, there is the potential death of our Wander’s companion, Mono, that is slowly played out during our search for her recovery and the slaying of Colossi. Then there is the land’s loss of life. As I explored the landscape, it become a character all its own. The barren spaces are punctuated with artifacts from a previous age of inhabitation.

Finally, there is the strange sense of loss as each Colossus is slain. Where other games would greet this end level success with trumpets and triumph, here it is met with orchestral sadness. Each death places the validity of our quest further in question, as we acknowledge the price of losing each unique creature. I loved how this tension was reflected in the deteriorating pallor of Wander’s complexion and Mono’s slow return to color and voice.

Each sad layer is delivered with a light touch, and is never hammy or overblown. Shadow of the Colossus looks loss in the face and deals with it on its own terms. What results is more than a game that works, but an experience of real emotional value. And, as is toyed with in its appearance in the film Reign Over Me (with a rare serious performance from Adam Sandler), this is gameplay with real therapeutic resonance.

The loss in Final Fantasy VII surrounds Tetsuya Nomura’s green-eyed character, Aeris (translated from Aerith). But rather than the brooding slow approach we are used to in a videogame character’s demise, Aeris’ death is early, untimely and unexpected.

This is a moment of real, unexpected loss. As Tetsuya Nomura reflected during his October 2005 interview in Electronic Gaming Monthly, “Death should be something sudden and unexpected, and Aeris’ death seemed more natural and realistic.”

Revisiting these moments of Final Fantasy VII reminds me of the TV series “The Wire.” There too, death is not glamorous or climatic, but simple and unexpected. And as Yoshinori Kitase shared in his May 2003 Edge interview, “In the real world … people die of disease and accident. Death comes suddenly and there is no notion of good or bad. It leaves, not a dramatic feeling but great emptiness. When you lose someone you loved very much you feel this big empty space … These are the feelings I wanted to arouse in the players with [Aeris’] death relatively early in the game. Feelings of reality and not Hollywood.”

It’s the unexpected and everyday nature of Aeris’ demise that is most affecting here. Perhaps because we know that this is a little too close to the truth of loss in real life. 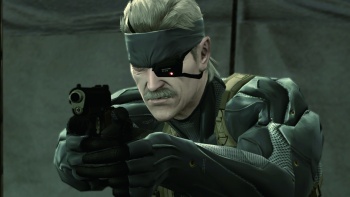 Metal Gear games have previously focused on the indestructibility of their hero, Snake. He takes up a Harrison Ford-esque character, full of youth and possibility and bravado – but with a few less jokes than Indie or Han. Metal Gear Solid IV had Snake staring old age and fragility straight in the face. As he dealt with his own mortality, Snake also had to deal with the knowledge that his death will spawn a pandemic on the earth he served to protect – quite some epitaph.

As Hideo Kojima described it in a Q&A session, “At the same time, I wanted the players to synchronize with Snake. He’s kind of old – he’s going to die soon. But he has to pretend he’s dead, or crawl on the ground … something no typical hero would do. It’s taboo. I wanted players to get the feeling of being Snake, to synchronize with his emotions.”

It’s interesting that by looking to add weight and drama to the concluding chapters of the Metal Gear saga, Kojima took the game further into the cinematic realm. Even though previous games in the series contained long cutscenes, Metal Gear Solid IV outdoes them all. At times, it becomes more of a movie with interactive elements rather than a videogame with cutscenes.

While these work well to heighten the sense of tension and drama of the story, at the same time I felt removed from what was happening. Watching, rather than controlling, so much action meant I struggled to connect to the themes at hand.

Despite this, the simple story of a veteran soldier whose strength was now depleted, left only with the memories of how he had spent his life, really captured my emotions. For all the grandstanding and in-jokes, this simple tale of loss made the game work for me.

Fable 2 deals with loss in a very different way. Rather than building emotion with drama and filmic sequences, it uses consequence to embed a sense of involvement. Turn the safety off and murder your wife and she’s not coming back – not that I would condone the slaying of virtual life partners, you understand. As Peter Molyneux said in his Video Gamer preview, “All I’m going to say is every choice has a consequence. If you took the choice to cheat you have to pay the consequences.”

As you encounter circumstantial or pre-planned moments of victory and defeat, the game is slowly building a fund of meaning. As I invested myself in my character, world and companions the consequences for each of them gain weight.

This fund is spent now and again along the way, but isn’t seen in full until the closing moments where you face a dire (save the cheerleader, save the world type) choice. Everything that has gone before suddenly becomes a backdrop for this one moment of decision and potential loss. I’m faced with a simple question: Can I pull the metaphorical trigger and spend that fund of meaning for the good of all, or do I keep it for another day and let them pay the price of “saving the cheerleader.”

I asked Josh Atkins, Senior Design Director of Fable 3, why Fable took this approach to loss and his response was interesting – not least with Fable 3’s release coming later this year. “Many games associate the loss of life with a high score. Games with a high body count are fun but I also think we can provide players with different kinds of experiences that elicit unexpected emotions from a videogame. To feel loss and sadness over the death of a computer generated character or to feel remorse over a violent action would all be experiences that help push the games industry in a new direction and prove the emotional value interactive entertainment.”

Of any series, Fable certainly shows promise of creating some genuinely new ways to engage with weighty issues. And by focusing on the player’s interaction rather than recreating a filmic story, Fable plays to what games do best.

Each of these games take you by the hand to places you wouldn’t necessarily choose to go. They each work for different reasons and connect to a variety of human emotions. But all of them have one thing in common: The sense that to be truly alive is to have understood what we have to lose.

Whether it’s the layering of remorse in Shadow of the Colossus, the slow creeping old age of Metal Gear Solid IV, the untimely shock of Final Fantasy VII or the terror of our own difficult decisions in Fable 2, each engages the heart and mind.

Not only that, but they are all games I still love to play. Also, they are all games that have sequels slated for 2010. So with Last Guardian, Metal Gear: Peace Walker, Final Fantasy XIII and Fable 3 to deal with, you better have tissues at the ready.