Somewhere between coding loot drop mechanics and choosing the best soundtrack to blow up zombies to, game developers decided that they wanted to add one more level of optional, but helpful complexity to their masterpieces: Mini-games. Do you need a break from hunting insanely difficult enemies? Need to relax after an intense strike and roll combat sesh? Sick of endlessly grinding for cool gear (NEVER!)? Then definitely take some time to seek out and appreciate your game’s official minigame. Whether it’s a recurring puzzle, an ever prevalent card game, or an activity that seems to serve no purpose, minigames help break the eventual monotony that plague most first-person action titles today. 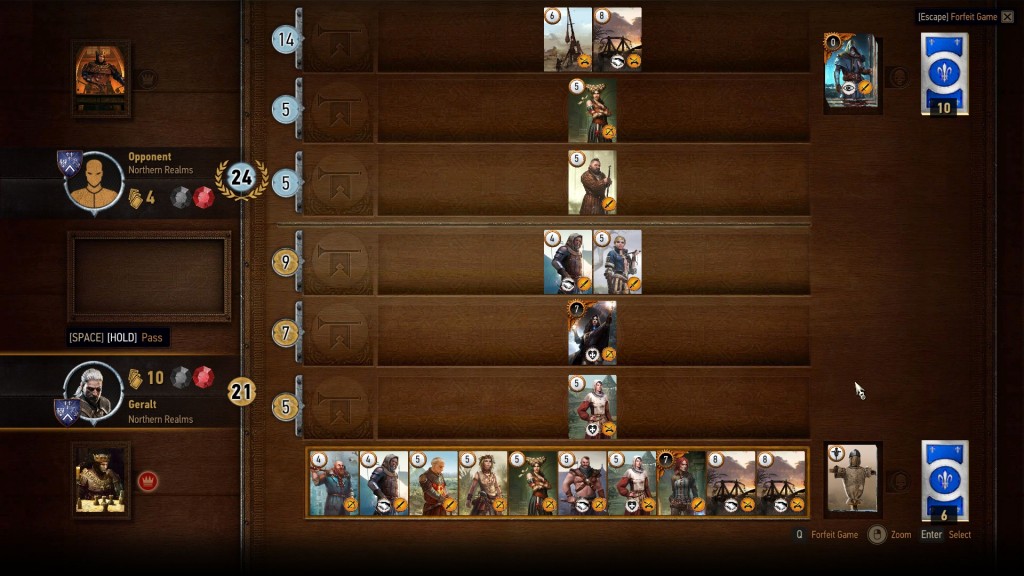 When you’re not busy getting your ass kicked by The Wild Hunt, summoning your seemingly teleporting demon horse (Roach, how did you get on this remote island?) or sleeping with practically every main female character in the game (Geralt, you dog you…), you may want to try playing Gwent-CD Projekt RED’s version of Magic: The Gathering. Gwent proves to be as fun as it is challenging, while also semi-anxiety and rage-quit inducing, as one strategically placed low-level melee card can send your entire house of cards tumbling down. The combination of character players, row positions, and weather cards means that there’s a good bit of strategy involved when playing Gwent. While it closely resembles a true collectible card game like Magic or Pokemon, it’s been stripped down enough that it remains strategic while staying fast-paced and straightforward, much unlike Witcher 3 itself.

Tip:Pick up Northern Realms Siegemaster as your general from the innkeeper in White Orchard–it can double the value of your siege row and help you get ahead in a few games early on. 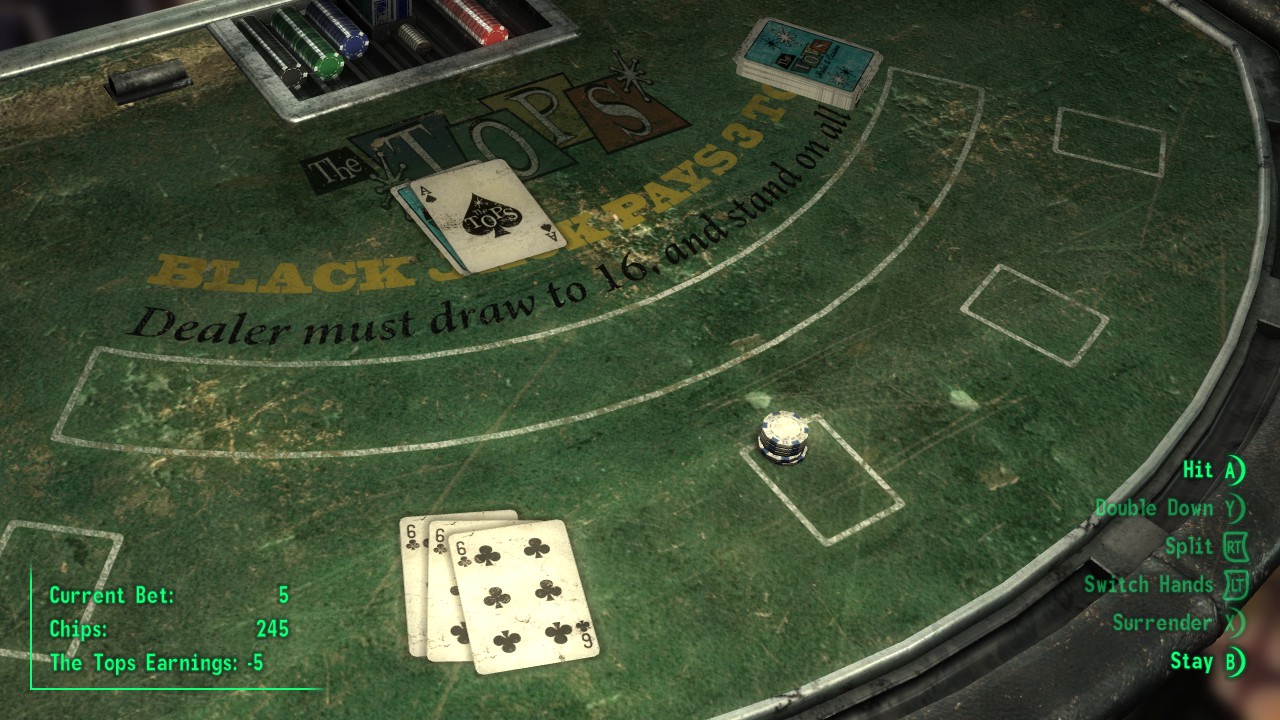 Because your standard post-apocalyptic depravities aren’t enough, Obsidian also added gambling to the mix in their most recent Fallout remake. There is just something so perfect about playing Blackjack in post-apocalyptic Las Vegas at a casino called Gomorrah…no? Essentially, the odds always favor the house, even more so in Gomorrah and Primm. Featuring Blackjack in New Vegas is great due to the fact that among the chem binges, watching slow-mo super mutant explosions through V.A.T.S, and nuking entire towns, the card game brings Fallout back down to earth, giving it a certain humanity. Everyone is equal in the eyes of the dealer.

Tip: Get your Luck stat above 7 asap; it’ll help immensely to sway the time you spend at the casinos in your favor. 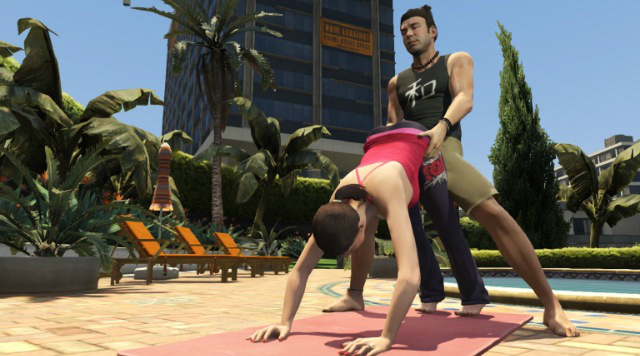 Including sports in a game like Grand Theft Auto V is ridiculous, but including an activity like Yoga is hilariously absurd. Players first encounter yoga during the mission “Did Somebody Say Yoga”, which involves everything from some “assisted” downward dog, “picking up” at a burger joint, and roofied sodas. Rockstar’s inclusion of yoga in GTAV really speaks to the level of game depth and detail as a whole–even Fabian La Rouche, the game’s pseudo-yogi has his own website within GTAV’s in-game internet. So, be sure to head up to one of the many hills located on the map and practice centering your chakra before you decide to hijack that airplane, knife that giant shark, or knock out a stripper.

Tip: Don’t forget to bring Michael De Santa’s iFruit phone so that you can play music as you “wind your spine into a knot.” 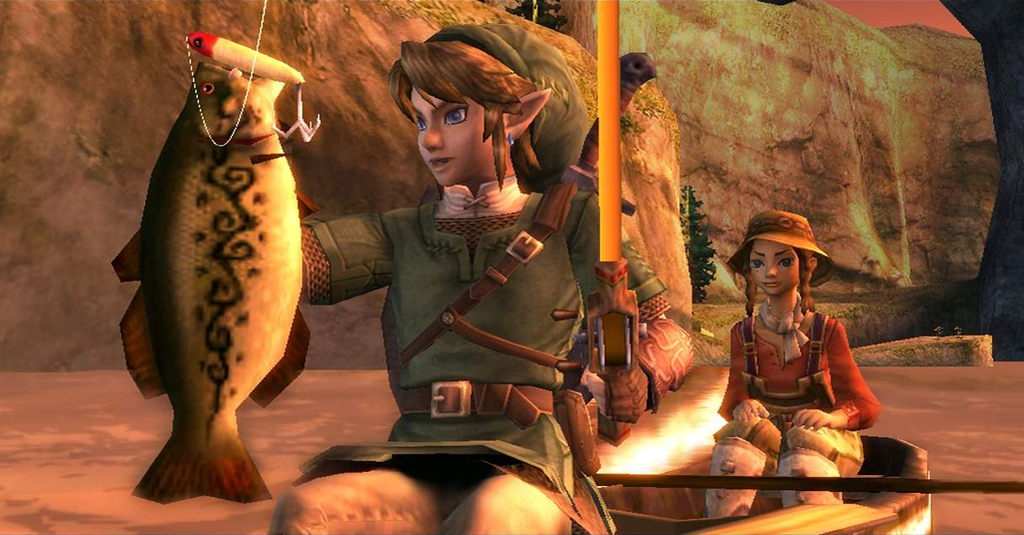 Admit it… you too spent WAY too much time fishing whether you played Zelda on N64, Game Boy, or 3DS in hopes of finding a Piece Of Heart. The Fishing Holes throughout the franchise are actually home to many more prizes that Link can receive by catching a record-size fish, and not by any other means in the game. Examples include: The Golden Scale or a Frog Lure, which in turn can be used to catch the game’s biggest fish, The Hylian Loach. Also, why are the fish that Link catches literally the same size as him?

Tip: You can often use your Iron Boots to keep your body from floating and your feet down as your target your fish. Additionally, be thrifty and get yourself fishing passes by completing mini-games in town – don’t waste 50 rupees every time. 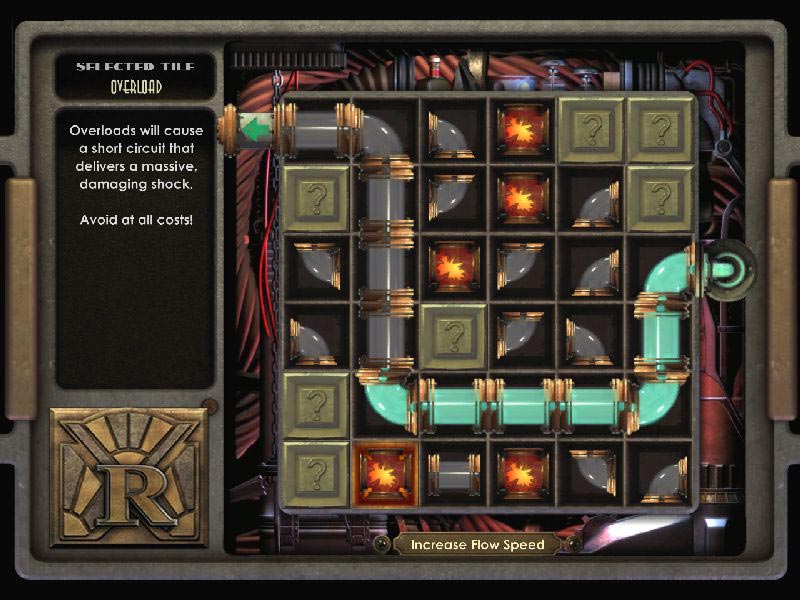 Ohh Pipe Hacking… gotta love you. Pipe Hacking breaks the monotony of constantly being attacked by Thuggish and Leadhead Splicers, and allows you to hack security devices and turrets to fight for you instead of against you. This added extra makes the game infinitely more fun, but you could always just craft an Auto Hack Tool at U-Invent stations throughout Rapture to get the job done as well. Pipe Hacking is essentially, a giant, warped version of Pipe Dream, but with, you know, questionable blue fluid oozing through pipes.

Tip: Freezing the mechanism you’re trying to hack will make the process infinitely easier. Use can use Ice, Winter Blast, or even Old Man Winter plasmids to do the trick. Also, you can use an Electro Bolt to temporarily shut down a Turret long enough to get close enough to hack it. If you want to take the easy way out, simply Research Turrets to level 4, and you’ll be granted an instant hack from there on in.