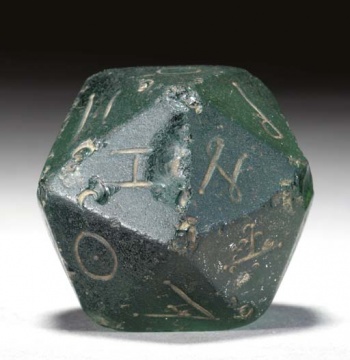 An archaeologist recently published a paper musing over the large amount of dice and playing pieces found in a 4500 year old city in Pakistan.

We’ve known that humans have played games for a long time. From the Roman twenty-sided die auctioned for $18k in 2008 (pictured right), to the discovery of pieces in the tombs of pharaohs in ancient Egypt for a board game called Senet. Despite these findings, evidence that humans played games throughout history has been largely ignored by the archaeology community, dismissing the findings as trifles or meaningless. But Elke Rogersdotter, from the University of Gothenburg in Sweden, has written a thesis about the large number of gaming artifacts found in Mohenjo-daro in modern-day Pakistan. The ancient city was one of the largest in the world when it was built around 2600 BC, and Rogersdotter points out that one in every tenth artifact found is gaming-related, suggesting a greater link to games for our ancient ancestors. The question is, seeing as Mohenjo-daro was discovered in 1922: why haven’t archaeologists discussed this before?

“The reason that play and game-related artifacts often end up ignored or being reinterpreted at archaeological excavations is probably down to scientific thinking’s incongruity with the irrational phenomenon of games and play,” said Rogersdotter. “They have been regarded, for example, as signs of harmless pastimes and thus considered less important for research, or have been reinterpreted based on ritual aspects.”

One interesting aspect of Rogersdotters thesis is the observation that these gaming pieces weren’t scattered randomly throughout the ancient city, but concentrated in certain buildings and places. Does that suggest gaming halls, where ancient men and women would gather to throw some dice with their pals? Mohenjo-daro is also unique because archaeologists have yet to find any temples or palaces in the city, and scholarship is stumped as to how the city governed itself.

These two seemingly unrelated facts lead me to one conclusion: Gamers ruled Mohenjo-daro.

Of course, that’s not exactly what Rogersdotter’s thesis is proposing. She’s more concerned with using gaming to understand the common citizen of Mohenjo-daro’s daily life. “The marked quantity of play-related finds and the structured distribution shows that playing was already an important part of people’s everyday lives more than 4,000 years ago,” she said. “It is an instrument we can use to come up with interpretations that are closer to the individual person. We may gain other, more socially-embedded, approaches for a difficult-to-interpret settlement.”

“Videogames Cause Rape” Author Gets Amazonbombed

Understanding What Makes a Fanboy Tick