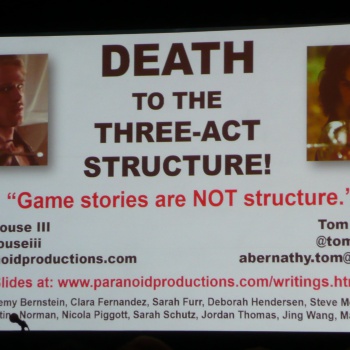 Storytellers in Hollywood have used a simple structure to deliver a story that’s satisfying to the viewer, but games just don’t work that way.

If you’ve taken any screenwriting courses, or heard MovieBob give an opinion on a film’s “third act”, you probably already have an idea as to what the three-act structure of a typical Hollywood screenplay is. At GDC 2014 session called “Death to the Three-Act Structure,” game writers – or narrative designers as the case may be – Tom Abernathy from Riot Games and Richard Rouse III from Microsoft Game Studios spent a large portion of their talk explaining just exactly what the term meant. Once that was out of the way, the two surprised the audience by coming up with an alternative structure that could be used in games.

So, what are we even talking about? The three-act structure is a way to organize the events of a film’s plot. You have the exposition in the first act, setting up the characters. Then there’s what’s called an “inciting event” which puts the major conflict of the film in place and starts the second act. The second act is the meat of the drama, with a few “pinch” moments that should increase the tension, then a third act which releases all that pent-up tension in a climax. Aaaah.

“Contrary to the way that Hollywood might lead you to believe, [using the three-act structure] is not a formula for success,” Abernathy said. “But it often seems to work pretty well.” A well-structured movie can get a lot of things wrong and still be pleasing to most audiences, he said.

In some linear games like Uncharted 2, the three-act structure also seems to work. Abernathy and Rouse mapped out how Nathan Drake’s antics fit, even going so far as to have the existential crisis and doubt in the typical calm moment in the middle of the second act. But Rouse admitted that players didn’t really want to stop playing to watch the hero mope around. “Players are like ‘Nate, what are you talking about? I want to get back to playing this game,'” he said.

Abernathy then shared some pretty sad data others have collected about player behaviors. In a Microsoft research study asking players to describe the plot of their favorite games, most didn’t have much to say and what they did say was actually wrong. Most players don’t even complete the stories of the games they play, and relatively short campaigns like that of Portal only have a 47% completion rate on Steam. “It’s a five-hour game. It’s not that long!” Abernathy said.

“Why worry about the third act of your game’s story when the majority of players will never see it?” he continued.

What players do remember and take away from the game is characters. Players strongly identify with the traits and behaviors of characters, and could accurately describe them when asked. Instead of creating an intricate plot with lots of twists and turns and reversals and betrayals, it might be better to concentrate on simpler stories. Abernathy again pointed to Portal as a great example. “It’s basically a character study,” he said. The player learns about GlaDOS in a very clear and simple way, and although all gamers may not finish the story, the character of the mad AI was memorable. 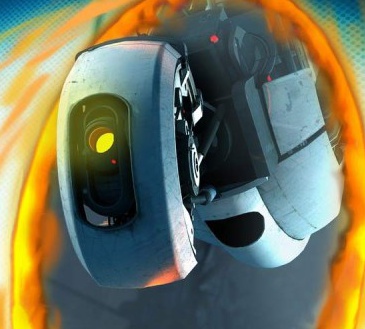 Rouse and Abernathy also pointed to serialized TV like The Sopranos and Breaking Bad, which structured their story arcs around several episodes or seasons or even entire series. Telltale’s The Walking Dead did something similar, introducing new characters in an episode and having them resolved, while Lee and Clementine were a throughline that had their own resolution in the fifth episode. The Last of Us also follows the serialized model by having distinct arcs within its 15-hour campaign, similar to how a TV series might over the course of a season.

But of course, all this only matters in linear games. What do open world stories like GTA V or Fallout 3 do for structure? Nothing. No game writer has figured out how to plan for a player doing missions out of order or skipping them altogether, as illustrated in the hilarious slide shown mapping out the plot of Fallout 3. There can be no rising or falling action when the player is busy killing raccoons in Red Dead Redemption for three hours.

“Games are not structure” was the takeaway Rouse and Abernathy underlined in their talk. The three-act structure of Hollywood is useful to understand when designing game stories, but it is far from necessary and may even hinder the game writer from creating a memorable story at all.

Death to the three-act structure. Long live the game character.