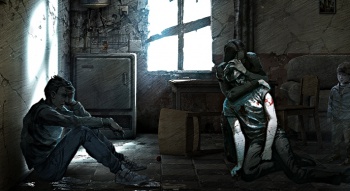 The idea that games can’t describe important social topics like the effect of war on the civilian population is kind of bullshit.

War is a game. Moving pieces on a board is frighteningly similar to how generals deploy units on a battlefield. Modern militaries rely on games to simulate situations and provide tools to allow leaders to practice decision-making skills before live fire comes into play. Heck, even drone strikes are a weaponized version Microsoft Flight Simulator. And as much as commercial video games such Battlefield or Company of Heroes simulate the act of war in the service of entertainment, there are not many games about the effect of war. Paweł Miechowski thinks that needs to be changed, and he’s doing it with a little game called This War of Mine from the Polish outfit 11 Bit Studio.

“We’re in the moment where we want to talk about important things via games,” Miechowski said. “We are used to the fact that important topics are covered by music, novels, movies, while games mostly about fun. Laughing ‘ha ha ha’ fun.”

In fact, he believes games are well-suited for showing harsh truths and realities, not by ham-fistedly repeating political phrases or mantras, but by allowing you to draw your own conclusions from the circumstances. “Games are perfect for this because they are interactive. Novels or movies are not,” he said. “Games can take you through the experience through your hands, by your eyes. You are not a spectator. You are part of the experience.”

What is the experience of This War of Mine then? 11 Bit Studios was inspired by the firsthand accounts of people who tried to survive within a modern city that had no law, no order or infrastructure due to an ongoing war between militaries. “Everything we did in this game, we did after extensive research. Any mechanics in the game are just a translation of our knowledge of situations in recent history,” he said. “Yugoslavia, Syria, Serbia. Anywhere civilians survived within a besieged city after war. They were all pretty similar, struggling for water, hygiene items, food, simple tools to make something, wood to heat the house up.”

Miechowski showed me an early build of This War of Mine and that’s exactly what it is. Your only goal, which is emblazoned on the screen when you start the game, is to “Survive for 30 days.” You begin inside a 2D representation of a bombed-out building with several floors. You have a few allies with names like Boris or Yvette, each of whom have traits such as “good cook” or “strong, but slow.” Orders can be given to your team, such as to build a bed or to scavenge the piles of junk within your stronghold for any useful items. You usually start out with nothing, but over time you’ll accumulate all sorts of items and materials. The game is in real time, the hours slowly tick by, but once you assign tasks it can be useful to advance the timeline by clicking the “Start Night” button. 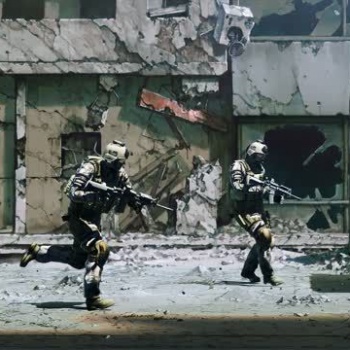 The night is when it’s the most useful to send someone out to collect food, water or whatever can be found, but that’s also where the most danger will be. Most of the people you meet will be hostile, and you’ll have to fight them with a simple timed-clicking combat system. Others will flee from you, while a small number of brave souls will agree to barter with you, trading the vodka you’ve distilled, for example, for things like ammunition or fresh water. “Everything you do in the game you need to think about because every action will have consequences,” Miechowski said. “I might take some food with me [when I scavenge], and if I find someone who is hungry, maybe give them some food, and they will join me. Or I can kill this person and just take whatever they have.” Fighting is a risk, because, of course, death is permanent in the game.

The art style of This War of Mine is simple, but evocative of the harrowing feelings of destruction and loss. “The visual style is heavily influenced by the topic,” Miechowski said. “Lots of hand drawn effects and muted colors.”

There definitely appears to be the seeds of an interesting game here in This War of Mine, but I’m not sure the team has thought the entire concept through. In a refugee situation, there would be at least some families, perhaps a young person with a surviving parent, and encountering them would present an extremely powerful range of emotions to explore in a game like this. Miechowski said they were talking about adding families, but they may not have the time or resources to add children. I also was confused by the current lack of a way to customize or personalize your team, XCOM-style, because that would lead to some wonderful emergent stories. Again, that idea has been discussed but it is not yet implemented.

The game just doesn’t seem very fun. The combat appears crude and rudimentary, and the crafting or strategy game aspect hasn’t been fleshed out to be anything more than busywork. The real-time mode coupled with long amounts of in-game time needed to complete tasks could be interesting, but right now it feels like a Facebook game instead of a robust simulation. Miechowski promised me that there was a lot more to the game than what I was being shown, but you’ve got to display the best parts of your game at an event like GDC. It’s especially important with a game that has such a serious topic.

I also don’t think the really important issues in a war-torn city have been represented very well. You have a stronghold or base just given to you at the start of the game, and Miechowski said that there’s really no reason to leave it. What happens if it’s attacked? Wouldn’t you want to move to a new location to avoid future danger? How are inevitable social groups like violent gangs represented in the game’s world? What about the sex trade? What about rape? Or child abuse? How do soldiers from one side treat civilians of the predominant race of the other? What about religion? I was only given a short glimpse into the This War of Mine, but I was disappointed that so many repercussions of war and the breakdown of society weren’t really being considered by the designers.

I still have high hopes for this game. It could approach the subject of the effect war could have on a major urban center with the seriousness the topic deserves. I just hope that Miechowski and the rest of 11 Bit Studios make sure to deliver a game first and foremost without falling back on “It’s important” as a game mechanic.