I’m on the record as saying that videogame sequels can be a good thing. If I enjoy a game, then I’m probably going to jump at the chance to experience that gameplay again. The designers can take fan feedback and refine the game, making something that exceeds its predecessor. This usually makes a hash out of the story, but that’s another column.

Sometimes fate can be a little strange about what games become franchises and what games dead-end. The dreary and unremarkable Kane & Lynch got a sequel. The gorgeous, innovative, but regrettably flawed Mirror’s Edge did not. Sonic invented new and creative ways to ruin a solid gameplay mechanic, and yet the Sonic titles keep on coming. Beyond Good & Evil received glowing reviews and yet here we are eight years later, and we don’t have a follow-up. (Although one is allegedly in development.)

The fate of Mirror’s Edge and Beyond Good & Evil is far from unique. I thought I’d talk about some old franchises or one-hit wonders that have been lost to time. Here are a few games that could have gone further, but faded away and were mostly forgotten. As a result, their unique gameplay was discarded.

Way back in 1986, Starflight gave us a game where you took command of your own starship and explored a vast sandbox-style galaxy. The game was so big that the game itself was also the save file. It filled an entire disk. In a move that would make today’s DRM-obsessed publishers choke, the first step of starting a new game was making a complete copy of the original disk. Imagine if you had to make a copy of your Final Fantasy XIV Blu-ray disk, and then you played on the copy. Crazy stuff.

The immense (for the time) save file meant that the game could provide a huge, persistent playground for your adventure. If you landed on a planet and harvested some minerals, those minerals were gone for good. It remembered the location of all the minerals and all the artifacts on all the planets in all the star systems. I’m surprised they managed to fit the thing on those 360k floppies.

There was one sequel, and then the franchise died. Other titles (such as Protostar and Star Control 2) tried to recapture the glory of the original, although the unique universe of lore and vibrant aliens are gone. Electronic Arts owned the name in the 90s, and I assume they still have it today. I do not imagine they’re interested in mucking about with this strange strategy / sandbox / role-playing hybrid.

Yes, I know there is a supposed “remake” in the works. Do not speak to me of that … thing. I knew X-Com personally, and you sir, are no X-Com.

The X-Com series did very well for itself, with a total of five titles and a few compilation / re-releases over the years. None of the sequels really attained the stature of the original, and that probably contributed to its demise.

But I think the real killer in this case was the changing landscape of gaming. X-Com was a complicated and unforgiving game of resource management tactical combat. Think “Space Marine Tycoon” with turn-based combat. While the number of videogame players has exploded in the last twenty years, the number of people who are fans of slow-paced, dense, punishing, turn-based games has not. It costs a lot of money to make a AAA game, and developers are no longer interested in aiming at a niche market like that one.

If you’re interested, there’s a freeware / open source game dedicated to recapturing the fun of the original: UFO Alien Invasion. 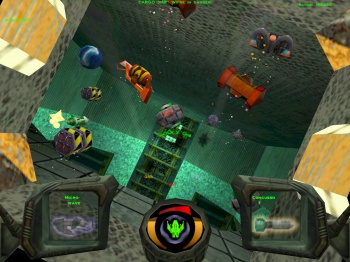 In Descent you piloted a little ship through a three-dimensional maze and blew up robots to a pulsing electronic soundtrack. It was a first person shooter where the “person” was a futuristic fighter plane and you usually couldn’t tell which direction was up.

The franchise lost its way as it aged. It began as a dark, cyberpunk-styled story where you worked as a mercenary for an amoral corporation. In Descent 3, the art direction took a right turn at bland and moved away from Blade Runner and towards Star Trek. It lost the dark humor that began the series and became a more clear-cut battle of good vs. evil.

I think I was the only person that objected to this shift in tone. Descent 3 was well-reviewed, and the game managed to do something that few other franchises have managed: It ended cleanly, tying up all the loose ends and bringing the story to a close. I’m glad the series finished well, but it finished.

After two decades of unconventional ideas, radical experiments, and enthusiastic hype, Peter Molyneux seems to have finally settled down with the Fable series. But in 1994 he was still playing the mad scientist of game design with Magic Carpet, a game where you played as an Arabian-styled wizard, battling other wizards on your magic carpet. While it looks quaint today this gameplay was mind-blowing in 1994. It had real 3D terrain that morphed and changed in response to your actions. This is a feature so novel, game designers were still making a big deal about it in 2008.

If the game was still around today we might characterize it as a first-person shooter with air combat and RPG elements. The flying mechanic offers gameplay possibilities not available to the ground-based FPS titles we see today. It’s an interesting idea, largely forgotten by the industry.

I’m sad these games didn’t make the cut in the long run. It’s sad to see their names fall out of favor, but even more saddening to see their ideas go unused. Why has nobody else has stepped up to bring fans the free-flying indoor tunnel combat that was popularized by Descent? Why doesn’t one of the many shooters out there crib a few ideas from Magic Carpet? Did the “starship captain sim” genre need to die in the 90s?

Game developers looking for new gimmicks to set their games apart might want to look to the past. Aside from the benefit of cashing in on nostalgia franchises, there were a few great ideas that have been lost in the shuffle.