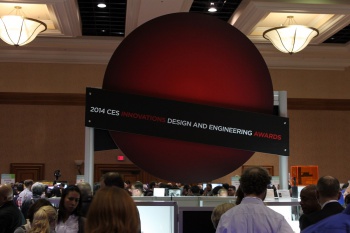 CES is a weeklong affair – even longer if you are exhibiting – but the world’s biggest tried and true tech show has presentation down to a science. Along with the press conferences, meetings, and the convention floor itself, several smaller events, or “mini-cons,” as I call them, take some of the hottest, most interesting products and put them in one easy-to-navigate room. CES Unveiled is one such event, bringing some past and present CES Innovation Award winners together for one night of showcase. Most of these products, as interesting or useful as they are (a phone case that plugs right into my wall outlet? Sold.), have nothing to do with gaming. Nonetheless, I set out to find a handful of products that exist in the gaming space.

The TV and display space at CES has been dominated by 3D the last three years or so, but it looks like manufacturers have finally gotten the message that consumers don’t really care about 3D entertainment in the home (at least in its current form). So what’s filling that space now? 4K displays, most of which are pumping out millions of pixels at a 3840×2160 resolution. The high pixel count comes with a high price – par for the course with any new high-end product – but that will start to change in 2014. 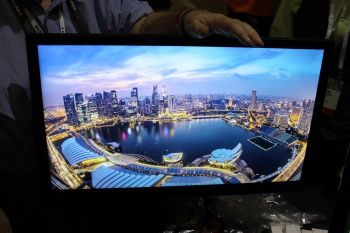 TVs are a different story, but 4K computer monitors are going to be at an…approachable price point this year. The few models currently available go for around $3,000, but Lenovo’s ThinkVision Pro2840m display will come with a $799 price tag. That’s not pocket change, for sure, but it’s a far cry from the three grand you’ll pay for this Asus 4K display.

The comparatively cheap price does mean some corners have been cut. The ThinkVision line is likely not for multimedia workers, because of its cheaper 8-bit color TN panel. But if you’re only concerned with gaming and other day-to-day computing tasks, and you really want to play PC games at 3840×2160, this is the display for you.

If the Pro2840m is for the HD enthusiast “on a budget,” the Thinkvision 28 smart display is for the 4K enthusiast who has some money to burn. Along with its 10-point multitouch 4K panel, the ThinkVision 28 is also a full-on Android device, packing version 4.4 (KitKat), a Tegra chip from Nvidia, 2 GB of RAM, and 32 GB of onboard storage. The OS, coupled with the aforementioned multitouch display, make the ThinkVision 28 the most gorgeous, visually stunning Android experience around. And when you’re done clashing clans or flinging birds at poorly-designed swine structures? You can switch over to your connected Windows or OS X machine with the touch of a button. The price? $1,199. 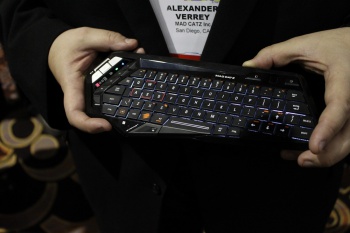 MadCatz, fresh off their M.O.J.O. Android console launch, brought a new mouse and keyboard to CES Unveiled. The mouse is a new take on the popular R.A.T. line: The R.A.T. TE. MadCatz is taking their “Tournament Edition” philosophy from the arcade stick line, and applying it to PC peripherals. The R.A.T. TE has the same shape-shifting body as the other R.A.T. mice, but its new 8200 dpi sensor and lightweight design should make it a favorite among PC players. There’s no weight system in the R.A.T. TE, as MadCatz wants the TE to be as light as possible. Price and release date are TBA.

MadCatz keyboard is a little different, aimed squarely at the mobile and HTPC markets. The S.T.R.I.K.E.m keyboard is about as long as an iPad, offering a full QWERTY keyboard experience with built-in programmable hotkeys and a fingertip-sized trackpad. It’s tough finding a solid HTPC keyboard – you want something with all the keys, but none of the desk-consuming space. The S.T.R.I.K.E.m, even with its edgy look, should be at home living in your coffee table or your messenger bag. Price and availability are TBA, but we might find out later this week. 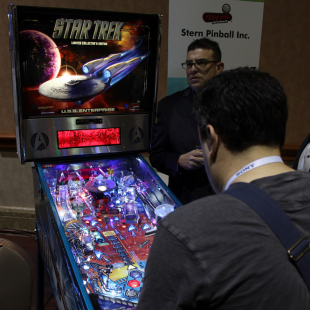 I joke with the headline, of course, but it’s definitely a surprise to see a pinball machine at CES. Stern Pinball typically comes out with three or four full-size pinball machine models a year, along with a handful of smaller “consumer” machines designed for your rec room, man cave, etc. This Limited Edition Star Trek machine is Stern’s latest, and it’s…well it’s pinball all right. It definitely hits all the right notes – minigames, expertly crafted insides, and that “match the number for a free game” bit when you lose (and the number NEVER matches). They are on backorder at the moment, but if you need Bones and Kirk in your life (and your living room), this machine will set you back about $8,500. Next up for Stern? A Ford Mustang machine (in partnership with the blue oval) set for late 2014. 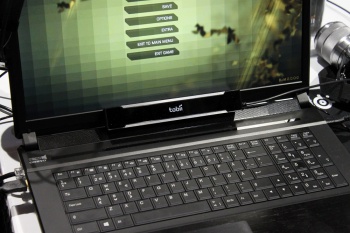 Tobii debuted its eye tracking tech at CES 2013, but it’s back in ’14 with a new dev kit. Dubbed EyeX, the dev kit is on pre-order for $95. The sensor bar mounts on the bottom of your monitor, or in the case of my demo, rests on your laptop without blocking any keys. The demo connected Tobii’s eye tech with Deus Ex: Human Revolution, and the experience, while a bit buggy, was pretty impressive. I didn’t go through the calibration process before jumping into DEHR, but even without lining up the sensors with my eyeballs, I could still close one eye to activate gun iron sights, or turn my head to lean around corners. You can also look at in-game menu icons and drill down with a quick glance.

It sounds like Tobii is taking a similar approach to Oculus with its dev kit: Talk with some of the bigger fish, while throwing the dev kit out to smaller/indie developers so they can go crazy with the hardware. It might take some time to catch on, but the EyeX hardware and driver/middleware are an impressive duo, even before retail release.