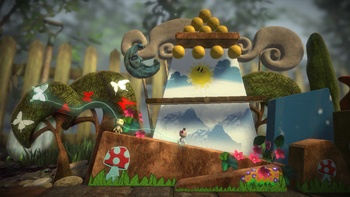 Echoing comments made by Nintendo president Satoru Iwata during his keynote this morning, Media Molecule’s Alex Evans and Mark Healey said that the secret to LittleBigPlanet‘s success was that the development team was “very not afraid to ditch things.”

Lucky for us they did, because based on the videos they showed us from early stages of LBP’s development, it used to be a bit of a mess. In the original vision of the game, an entire family of sack people would play through levels based on fairy tales from around the world, changing costumes to fit the story. Media Molecule realized they were on the wrong track after wrestling with a beanstalk for several weeks. It was based on a gorgeous piece of concept art that everyone really loved, but no matter how hard they tried, they simply couldn’t make a level based around it any fun. They finally realized that vertical gameplay was simply too frustrating because the player was fighting gravity as much as the actual level. Once that light bulb lit up, the beanstalk idea was ditched and the general fairy tale theme eventually went, too.

The game’s creation tools got an even bigger and more helpful overhaul, though. LittleBigPlanet is a very tactile game, and the team very much wanted the level creation tools to be similarly physical. To paint a wall, for example, you would transport to a room in your pod, grab a blob of paint, return to the game world and paint it with a roller. It was cute, but clunky. It quickly became obvious that no-one was ever going to create an entire level that way because it was simply too much of a chore. At that point, the team was a bit torn. On the one hand, they still felt very strongly that the creation tools should be physical, but they also felt strongly that creation should be a lot of fun. Eventually, they settled on the Poppet, though it went through many iterations before becoming what we now see in the game.

Given how passionate the LBP community is about making levels (LittleBigContra, hello), it’s ironic that Media Molecule didn’t originally expect user creative content to be that big a part of the game. They’re pleasantly amazed by the things people have created, but kind of wonder at the sort of person who makes something like Little Big Computer. “Oh, my god, there are some really fucked up people out there,” observed Healey.

Another element of LittleBigPlanet that fell by the wayside was pre-scripted, pre-modeled boss fights. Once the team decided that they weren’t allowed to “cheat” – that is, they had to use LBP’s creation tools for 100% of the level design – they knew they had to rethink how they would handle bosses. “There are tricks we use as developers to make the fights cooler,” explained Evans, but those tricks wouldn’t work if the team could only use the creation tools.

Almost everyone on the team had to give up an idea (or several) that they really loved in order to make LittleBigPlanet the game Media Molecule wanted it to be.