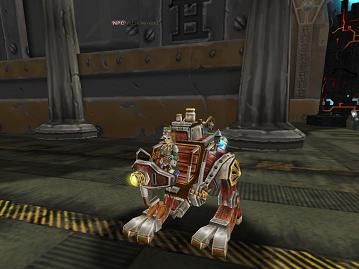 Take a steampunk aesthetic, mix it with some bizarre quests and add a sprinkle of PVP and you get Neo Steam: The Shattered Continent, the upcoming MMO from Atlus Online.

Let’s get something out of the way: Neo Steam is a Korean-designed MMO, news which may send you screaming in the opposite direction as fast as your feet will carry you. After all, Korean MMOs tend to carry with them certain connotations, like endless grinding, impossible difficulty curves and sickeningly adorable design, none of which sits particularly well with the typical Western audience. Fortunately, Atlus is aware of this and has adjusted the game to be more in keeping with American temperaments. You won’t be sent on quest after quest to kill ten rats or harvest 20 apple and you won’t find yourself slamming up against an agonizingly harsh difficulty curve as you level up, either. As for the cuteness…well, ok, Neo Steam is still pretty damn cute, but you get to build steam-powered machinery and ride enormous siege engines, so it kind of balances out.

The Neo Steam of the game’s title refers to an in-game resource that is in short supply, but high demand. The game’s two nations, the Republic of Rogwel and the Kingdom of Elerd, are locked in a never-ending war for control of Neo Steam. Rogwel wants to use the Neo Steam to further its technological goals and invention creation, while Elerd wants it to help them fuse magic and technology. Which continent you decide to join will largely depend on if you want your character to follow a technological or magical path; other than that, your options are largely the same. Each nation has six races (though one or two races are specific to a nation), and the same four base classes: warrior, mystic, machinist, and scout. Class specialization varies a bit based on continent, though.

Based on the demo that I saw, much of Neo Steam is in keeping with other MMOs – you visit towns, talk to NPC for quests, level up, the usual shtick – but it differs in two important ways. The first is the game’s focus on crafting. Everyone in the game can craft, though more advanced crafting requires the machinist class. When playing a game with a steampunk vibe, you naturally want to make some steampunk stuff, and the fact that everyone can right out of the gate is pretty darn cool – especially when some of the things you can craft add specific attributes to your weapons.

The other key difference is in the Neo Steam‘s bizarre charm. Whether it’s a quest that takes you down the throat of a Terra Whale to get at the parasite deep within its guts, pets that evolve into hovering light bulbs or clocks, or costume choices like bathing trunks, water wings, and a set of flip flops, Neo Steam has Atlus’ trademark flair all over it. It’s a little off center, a little wacky, and as refreshing as a fresh fountain soda with lots of ice and a bendy straw. Which is a weird analogy to make for a game, certainly, but that’s Neo Steam for you.

Neo Steam will have PVP, but the PVP areas will also have PVE elements that will earn you extra experience. Killing monsters in those zones will help you level up faster, but you’ll have to watch your back the entire time. Fighting in PVP matches will earn you points that you can trade for special gear you can’t otherwise get, including titles. If you’re in the mood for special gear, but don’t want to step into the arena to get it, you can always just crack open your wallet. Though Neo Steam is free to play, it does support micro transactions for in-game items. Some, like the kitty backpack, are strictly for fun or vanity, but others will affect your stats. You can use those items in PVP, but apparently the stat buffs aren’t dramatic enough to unfairly weight the combat – no buying your way to godhood.

But what if you want in-game loot but don’t want to fight or pay cold, hard cash? Participating in Atlus Online’s portal – by posting in the forums, reporting a bug, whatever – earns you points that you can use as currency.

The open beta for Neo Steam: The Shattered Continent begins early this summer, with the full launch scheduled for a bit later. I can’t resist steampunk anything, so I’ll be taking it for a spin as soon as possible and keeping you posted.