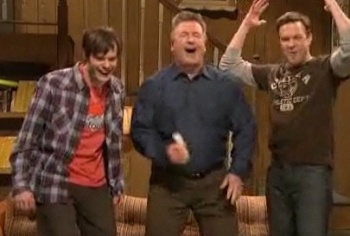 I will admit right now that I am one of those people who feels like the Wii and DS are a pain in the neck when it comes to online play. I’m not sure why taking them online is such a pain, and neither is Todd Northcutt of GameSpy Technology. Granted, if you’re the one making the tools that consoles use for matchmaking, leaderboards, and other online features, you might have a slight bias, but he made good points.

The bulk of his presentation concentrated on five common excuses developers make to wimp out when it comes to online support for Wii and DS. Games with online multiplayer sell half again as many copies as games without any online component at all, and that games with even just leaderboards or stats sell 25% more, so how can it be that more devs aren’t taking advantage of this?

People think only first party Nintendo games succeed, but apparently third party games make up 60% of the market, and only 15 of the top 40 games on Nintendo platforms are Nintendo games.

People say Wii users are too casual, but everyone knows that there are hardcore gamers out there with Wiis (even if they are for their girlfriends) who would jump at more mature games. Northcutt rightly highlighted titles like MadWorld and The Conduit as examples of games that will attract this audience. Plus, they’ve seen that if developers properly tailor the online experience, even the “casual” players will not be intimidated by playing online.

Are Wii users stupid? He made the point that just because someone isn’t comparing Wii games to the latest PS3 and 360 games doesn’t mean they don’t know what quality is. It wasn’t quite clear, but perhaps he was getting at the fact that, yes, we all know people who buy games that “gamers” wouldn’t touch, but if they enjoy it, then does that make them stupid for not knowing better? I almost felt like he was working at cross-purposes to his own argument, but the “stupid” point in general just felt unfair to me on the face of it, so it seemed a valid inclusion on the list of excuses.

How about those 12 digits? It was interesting to hear Northcutt’s stat-backed opinion that, “Friend codes are a developer hang-up, or gamer reviewer hang-up” and not an issue for players, who are, in fact, using them – sometimes as their first experience with online gaming – frequently and with success.

His final point was that online does not necessarily equal multiplayer – you can have online components such as player generated data that can be shared or stat compilations that would interest players. He cited user created levels in Mario vs. Donkey Kong 2: March of the Minis and spectatorship and betting in Super Smash Brothers Brawl as ways to sneak in some online without full-on online multiplayer modes. GTA: Chinatown Wars was his example of a game (on DS) that really nailed the full complement by having not only multiplayer, but tons of stat tracking and unlockable content.

Unfortunately, the house wasn’t very full for his talk, but I hope that the message still gets out – online for Wii and DS: we’ll take it!