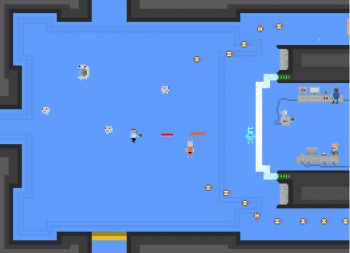 Richard Grillotti and Miles Tilmann launched themselves into the sea of webgames (,no standards of quality and no rules or limits on monetization — “total chaos”) on the basis of a good friendship and similar interests not so very long ago, and now they are making a living doing what they love. What’s the secret, boys?

In the beginning, they admit to making their share of “amateur moves.” Their first project was so ambitious that it couldn’t be completed, but the art and characters that overflowed out of Rich as Miles learned to program became the inspiration for later titles. For instance, the antagonists of their first project ended up being the protagonists for the shmup Gamma Bros.

Being nominated in the Independent Games Festival two years ago with that title (their second after Ratmaze – a simple concept full of compelling cheese devouring action) helped them gain a following and experience, but they didn’t want to rush things. One of the key things they learned (a “pro move”) over the next year or so of prototyping was knowing when to quit — “we would’ve had to cut so many corners that we would’ve…lost the essence that we wanted to impart in [those games], and that just wasn’t an option.”

Ratmaze 2 was a sponsored deal, which helped them with funding for Dino Run. It was also sort of their gateway to work-for-hire, which they described as “like getting paid to go to college” since they always learn so much just by working on any games – whether about budgeting time and money or designing levels and tools.

After discussing the main ways of making money with games (which boils down to ads — “Are we making a game or a vehicle for ad distribution?”) they gave some general tips about working on web games and also how to try to avoid the ad scheme. Don’t attempt a AAA title in flash, work with someone who complements your skills, “communicate everything even if it hurts” to keep the team all on the same page, and give the player a reason to care about your games and your company.

That last bit is important not only to keep people playing your stuff as opposed to moving on to one of the other 500 billion games out there, but to make them care enough to possibly pay to download your game or even just donate in support of your upcoming project — i.e. devs can make up their own rules in the “new digital economy.”

Square Takeover of Eidos Gets Approval