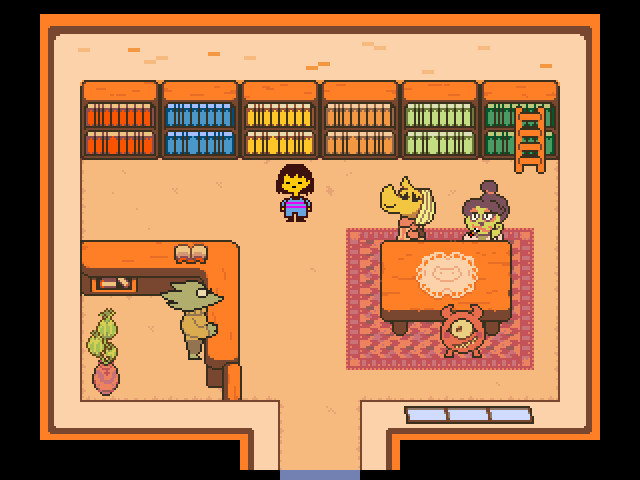 Anyone that’s started up Undertale for the first time will encounter a mysterious locked door early in the game’s Snowdin area. Nothing will open it, not even the expensive Mystery Key item. Learn how to get inside with the quick guide below.

Undertale is just full of mysteries, but this was plagued fans for a long time. Down the path east from Snowdin Village, there’s a long cavern that eventually ends with a seemingly impassable door. Don’t worry, there’s nothing story-related hidden here — no new dungeons or characters to meet, but completionist and super-fans might want to stop by for a visit.

See exactly why we loved this unique JRPG revival on The Escapist’s Undertale review, then check out our ‘Best of 2015’ list to see why Undertale deserves its spot.

How to Enter the Mystery Room

The optional ‘Mystery Door’ is a locked door in Snowdin Forest. It can be accessed just before the Papyrus boss battle. There’s a path leading south with a cliff — the dark cavern holes feature glowing eyes. Walk east to enter the cave that leads north to the Mystery Door.

What’s Inside the Developer Room

The Developer Room is a literal Developer Room — there’s a computer with silly posts, a text-to-speech converter, and clues that the little white dog is the actual developer behind Undertale.

There’s also a Jigsaw Puzzle and a length of rope. Other than the annoying dog, there’s no real purpose to the real. It’s just a fun location to explore.

How to Get the True Pacifist Ending

Getting the True Pacifist Ending isn’t easy. We can’t cover every single boss battle, but we can give you the broad strokes.

Those are the broad strokes. Keep checking The Escapist for a more complete True Pacifist ending guide coming soon.