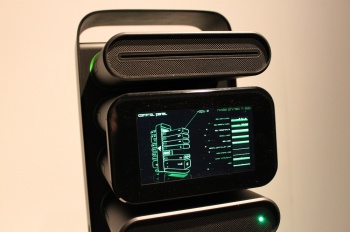 It’s hard to find meaningful, in-your-face innovation in the desktop PC space nowadays. Sure, you get a cool, airflow-friendly case here, a water cooling system there, but most of the engineering and research is on the chip level. When was the last time you got truly jazzed about a new desktop PC, it’s always-improving specs aside? Even most of the Steam Machines being announced this week are built via off-the-shelf hardware you and I can buy through Amazon or Newegg.

Razer, who is always one to make a splash at such events, might have the most interesting desktop PC design I’ve seen since Thermaltake’s BMW-designed Level 10 case a few years back. Project Christine is a modular PC design, compartmentalizing every component you would find in a PC into its own liquid-cooled capsule. To put it another way: If LEGO was a mechanical engineer, and went through some sort of weird goth phase, this is the PC he/she would design.

The Project Christine concept (and Razer is adamant that it’s a concept) starts with a backbone of sorts, which houses the motherboard…and not much else, as far as I can tell. Every other part of the PC comes in a module, from the power supply and mineral oil reservoir (for the liquid cooling) to the CPU, GPU, and storage options. Razer CEO Min-Liang Tan told me that several designs kept more of the hardware on this backbone, like onboard RAM, but they’re trying to make it as customizable as possible. If and when Christine comes to market, I wouldn’t expect to see much in/on the backbone besides the necessary motherboard components.

The modules, which were all mockups in the press room, seem to come in a small and large size. The smaller module is about the size of an old Game Boy (a little wider, perhaps), while the large module looks like a VHS cassette (comparing cutting-edge tech to old-as-dirt devices and media is weird, but it’s been a long day). Both modules are the same height, and seem to use the same connectors – a trio of copper-covered plugs for power, a smaller white connector for data, all flanked by two liquid cooling connectors. The bottom of Christine had two larger modules, one of which houses the power and reservoir systems. There was also a one-off module on the front – two smaller modules linked together – that housed a small color display, good for system readouts, hardware specs, etc. The display did say that one of the modules housed a GTX 780 Ti, but we couldn’t confirm if that was real or just a video loop on playback.
As far as specs go, all we could get out of Razer was Intel and Nvidia. Razer uses both for its notebook offerings, so the lack of AMD isn’t spiteful as much as it is out of necessity for now. Other than the name drops, there was no word on RAM, storage, etc. during my demo. Windows is the name of the game here, too, although Razer stressed they’re going to keep the retail version of Christine (assuming it happens) as open as possible. In other words, SteamOS is a distinct possibility.

We’ll be sure to update you on Christine if and when more info comes around. Seeing the desktop at E3 is likely, perhaps in close-to-retail form.