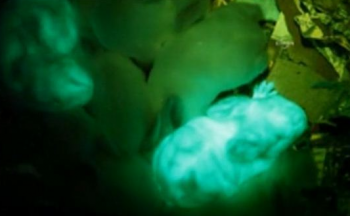 A litter of bunnies were born at the University of Istanbul in Turkey earlier this month. All were given a clean bill of health, despite the fact that two of them glowed a bright green when placed under ultraviolet light. The pair of fluorescent fur-babies had been injected with a gene for a jellyfish protein in a process called transgenesis.

Bunnies aren’t the first animals to go green. Cats that were genetically-engineered to carry a protein that defends against feline immunodeficiency virus, the cat version of HIV, were also injected with the jellyfish gene as a physical indicator of the cat’s immunity. If the cat glowed green under ultraviolet light, it was FIV-resistant and totally far-out, man.

Glowing bunnies are cute and all, but it still begs the question: what’s the point? Jellyfish genes give scientists a simple indicator that a gene was successfully transferred into a new animal. The ultimate goal is to use the process to insert genes into livestock for use in medications. “Animals can make valuable proteins in their milk that humans use for medicine, and you can extract the proteins quite easily,” Stefan Moisyadi, an associate professor at the University of Hawaii Manoa, said. “It would make certain pharmaceutical production extremely cost-effective.”