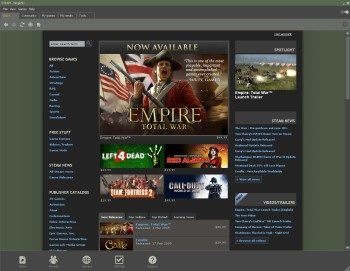 Perhaps I represent a distinct minority, but I would be perfectly content to never have to own another boxed copy of a game. On the topic of digital distribution, I am a convert.

I understand the hesitancy people have with the idea of not owning a disc, and the degree of perhaps unfounded faith it puts onto the mediums of distribution. I realize that for many, even just the tactile sense of physical ownership imbues a purchase with value. I too once found something magical in mangling the cellophane wrapping of games so I could tear into the box like some ripe, tropical fruit.

By putting my faith in digital distribution, I also well know that I am relying on them to provide me long-term access to my game. A faith many would consider achingly naïve and tenuous at best. Even the solidly reliable Steam, whose virtues I will extol at length, might, I suppose, someday stumble into catastrophe and then where would my umpteen-hundred dollars of games be?

I admit that one or two really bad experiences could shatter my entire worldview on the matter, but, I also note with some confidence that the ability of companies to deliver games directly to my technology without the fussy middle man of flimsy plastic plates seems to be improving by the day. Now that Steam has announced the ability to add DLC to the already excellent download service, I may actively avoid buying my PC games unless I can get them on Steam or a similar service.

Add to that the changing reality of consumer rights in the digital marketplace, and I wonder if that sense of tangible ownership just because you have a disc in a box isn’t its own kind of illusion. The fact is that games phoning home and digital verification is a problem when you are operating with product from brick and mortar stores, and virtually disappears when operating in the controlled environments of digital delivery services.

And, frankly, I’ve lost or damaged more discs than I care to remember, leaving me with just as poor access to my library of games. These services, particularly the ones that don’t charge me some ridiculous fee for long term access to my games, are more likely to keep my investments secure than I am. I’m not sure having a box gives me any greater certainty that in five years I’ll be able to find, run and play, say, Dawn of War II or Empire: Total War.

Let’s be honest, my confidence in downloadable distribution is all about Valve. I have had my problems with my Xbox Live Arcade games in the wake of two Red Rings of Death, and to date I’m not completely satisfied with the solutions for verifying my right to play my games offline. I’ve dabbled with EA’s distribution service with little hassle, but it lacks the bells and whistles that I never knew I wanted.

Steam provides what I consider the killer-app for my PC. You will forgive me if I opine as though my words spilt from the lips of Gabe Newell himself, but when it comes to companies that consistently get it right, Valve may be in a class by itself. I’ve talked to countless developers, names of the industry, who speak of Newell with the kind of reverence you might reserve for a holy leader. And, he’s got his hooks lodged firm in me.

Every Friday finds me at my computer checking Steam’s weekend deals to find out if there’s something waiting in the store that I never knew I had to have. I suppose congratulations need to go out finally to someone who figured out that gamers, like every other consumer in the history of commerce, will buy things if you put them on sale. The net result, though, is that almost by accident, I’m spending more on PC gaming than I have in years.

Meanwhile, loosened restrictions on the size and cost of downloadable content for my Xbox 360 have proportionally loosened my wallet despite my suspicious skepticism. I am a willing victim to the illusion of fake money spent on endlessly appealing impulse buys, like an alcoholic living in a room with an affordable and well-stocked mini-bar.

Affordability, convenience, unrestricted access to new content and long-term monetization of assets through DLC, as a business model it is virtually flawless and as a consumer it seems like a dream come true – if you have confidence in the concept. It also seems like the inevitable turn of the industry. Strange as it would have seemed five or six years ago, not only is digital distribution a strong attractor for customers, it is also perhaps the best and most secure option for publishers to combat piracy.

So, I’m a convert. I know many will see it as foolish, biding their time until the day when the rules suddenly change. It’s not like there’s no precedent, but until that day comes I suppose you will find me funneling a majority of my gaming dollars through the coffers of Valve. It’s not a flawless system, but to my mind it’s the best option on the table.

Sean Sands is a professional copywriter, co-founder of gamerswithjobs.com and a starry eyed optimist who is sure that this time the games industry won’t disappoint him and crush his dreams.