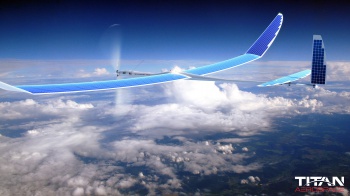 Google and Facebook have been competing in a software arms race for a while, but now that competition has spilled from the web to the skies. Last month saw Facebook acquire aerospace drone company Ascenta for a hefty sum of $20 million, hoping to use drones to deliver internet access to the two-thirds of the world that lack it. The social media company was also eyeing New Mexico-based Titan Aerospace, but it looks like it was too slow: Google snatched up Titan earlier today for an undisclosed price.

Titan Aerospace boss Vern Raburn will continue to direct operations, but now the drone company will be working on Google’s Project Loon to create a global blanket of internet access. The planned drone network will be powered by wing-mounted solar panels to keep the devices flying for five years at a time, and will spread the Internet to webless regions at speeds as high as a gigabit per second – far above the average speed in the United States.

The drones will also be equipped with imaging technology, so Google could also be using this initiative to beef up services like Google Maps. “It’s still early days for the technology we’re developing,” says a newly updated Titan Aerospace website, “and there are a lot of ways that we think we could help people, whether it’s providing internet connections in remote areas or helping monitor environmental damage like oil spills and deforestation.”

Operations are expected to begin as early as next year, bringing new regions online and conveniently seizing the new markets that those regions bring – for whichever company gets there first.