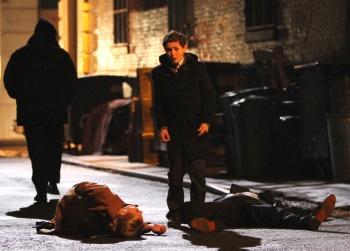 Fox Gotham Showrunner Bruno Heller thinks Bruce Wayne should be a lot more “traumatized” and is not “a fun character.”

It’s hard to argue that there’s been a lot of versions on how Batman — and Bruce Wayne — has been interpreted both on-screen and in the comics. But even so, Fox is doling out its own version of the Dark Knight in its “Gotham” TV series, that will not only focus on a young James Gordon (before he was the commissioner), but will also introduce a young Bruce Wayne. Speaking to IGN, Gotham showrunner Bruno Heller (The Mentalist, Rome) was asked how he’s figuring out how much hints to show viewers of the Batman Bruce will eventually become, since he can’t go that far ahead in the TV series’ timeline.

Well, it’s really about telling the true story of how someone might become the Batman. The psychological truth of that is that he’d be a lot more damaged and a lot more traumatized and a lot more strange than some visions of how that character would be. It’s a dark character, and it’s a character under pressure. So to that degree, as much as I hate to say it, he’s not a fun character, as you might imagine. It’s not a tale of triumph. It’s a tale of redemption.

While it sounds like Heller is putting his own spin on Batman’s origins, which we’ve seen countless times, you have to admit, it does sound a bit intriguing. I don’t know anyone who’s experienced what Bruce went through in his origin story, but if ever that happened to anyone, I suspect they’ll be a bit more traumatized compared to how Bruce’s been shown before. Then again, the fact that Bruce is mostly shown as this maniacal and obsessed individual is also another way to highlight how damaged he must be.

Are you looking forward to Heller’s interpretation of Bruce Wayne in Gotham? Or should he adapt it the same way Christopher Nolan (Dark Knight trilogy) or Frank Miller (Batman: Year One) did in their respective versions?