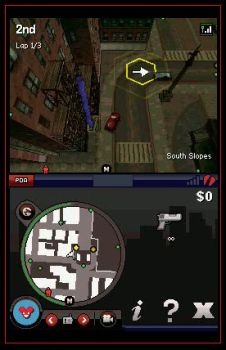 Despite being the highest-rated title in the history of the Nintendo DS, Grand Theft Auto: Chinatown Wars has suffered from “very disappointing” sales, leading analysts to cut the game’s annual sales projections by as much as 75 percent.

Analysts including Jesse Divnich of the Electronic Entertainment Design and Research and Cowen and Company’s Doug Creutz predicted earlier this week that the first Grand Theft Auto title for the Nintendo DS had sold 200,000 copies in March, a respectable figure but well below expectations and just barely enough to squeeze into the top ten DS titles for the month. The actual results were far worse than expected, however, as according to NPD numbers the game managed to sell only 89,000 copies.

Creutz said the “very disappointing” sales, which occurred despite the huge popularity of the Grand Theft Auto franchise and a flood of extremely positive reviews, were the result of the unique “challenges” posed by the DS platform rather than any inherent problems with the game itself. “Take-Two exported their most valuable IP onto the most widely distributed gaming platform and created the most highly-rated title in the history of that platform,” he said. “We knew there were some uphill challenges due to the demographics of the platform, but believed there were enough core gamers/adults owning a DS that the title could still perform very well.”

“However, either the demographics are more challenging than we thought, or core gamers did not view the title as an essential purchase due to the nature of the platform,” he added.

Creutz said the surprisingly poor sales of Chinatown Wars had led him to drastically cut the game’s first-year sales projections, from two million units down to only 500,000. “We believe the experiment was a worthwhile one for Take-Two and still expect the title to be profitable (though likely marginally so),” he noted. “However, the disappointing first month sales reinforce our view that achieving meaningful success on Nintendo platforms remains a very difficult proposition for third party publishers.”