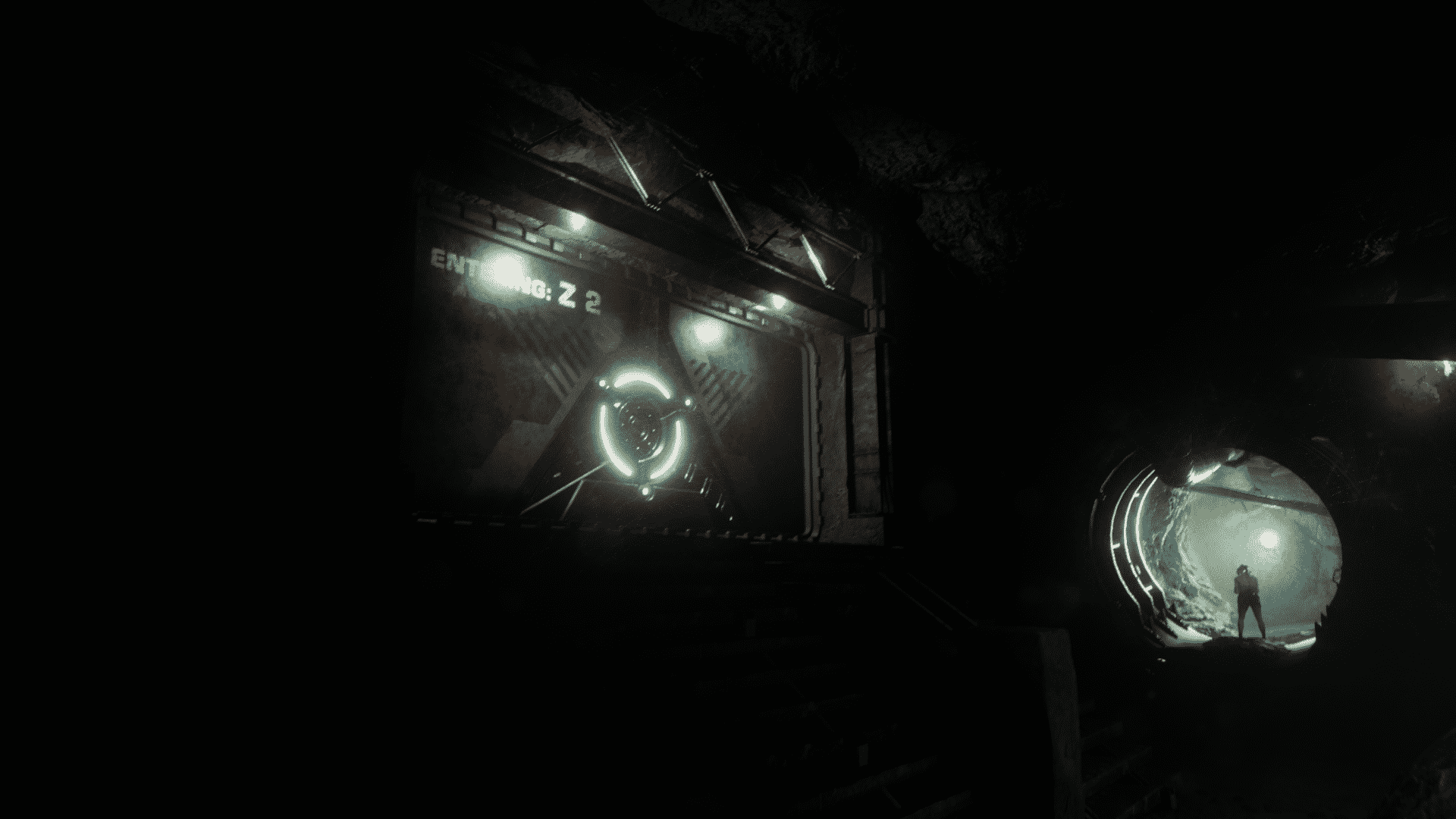 GTFO has been on my radar ever since the game’s initial reveal all the way back at The Game Awards in 2017. Developed by the Swedish studio 10 Chambers Collective, GTFO offers players a hardcore cooperative experience that heavily emphasizes teamwork and stealth to survive. Having played its pre-alpha test with the developers a few weeks ago, I found the game to be largely successful in what it sets out to do.

One wrong move can send everything into a complete frenzy, and the developers have purposefully made the game a challenging experience that’s meant to be failed again and again before players secure a victory. While the trailers have shown off heavy action bits, GTFO is more about being as quiet as possible and coordinating your strikes on enemies to keep things calm and controlled. Ammo and tools at your disposal are limited and scarcely scattered around maps, so the game surprisingly revolves around a lot of stealth takedowns using melee weapons.

The enemies in the game are grotesque creatures that are completely blind, but they can sense sound and movement, so encounters often ended up feeling like you’re playing a game of red light, green light. You can see our full playthrough in the Game Night stream archive below, but I’m quite impressed with how GTFO is shaping up so far. It’s incredibly tense, and if the developers can offer more varied enemies and objectives, GTFO is sure to find an audience.

Now that the pre-alpha is over, I wanted to take some time to catch up with co-founder and community manger Simon Viklund to see how the community responded to the alpha, what feedback they got, and what’s next for GTFO. 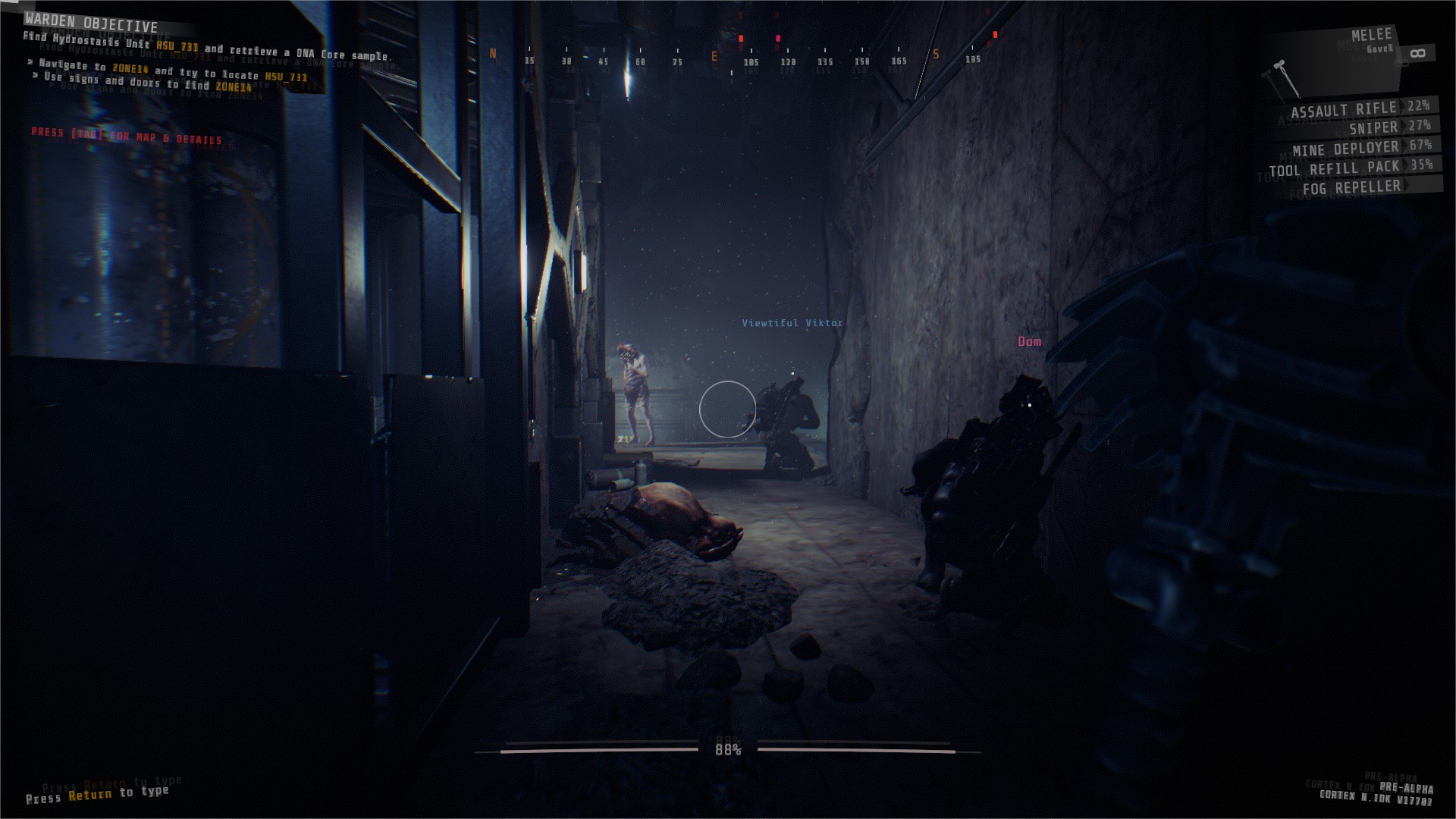 The first thing I wanted to ask now that the alpha is over is how was the reception to GTFO? What were the biggest takeaways 10 Chambers took from people finally getting their hands on the game?

Simon Viklund: Obviously we discovered a lot of bugs thanks to the many testers. We appreciate all the help very much — and GTFO will be a better and more stable game thanks to everyone who participated! Secondly, we discovered that there is an audience for GTFO! This was something that we weren’t sure about before.

We’ve designed a game that we think is missing on the market, but we weren’t sure if there were others who felt the same way. The game is difficult and rather slow-paced compared to other games that could be said to be in the same genre — but we’re happy to say that judging by the reactions from the gamers who played the alpha, there are a lot of players who have been missing a game like GTFO!

What did you find that players enjoyed from the alpha, and maybe also what things players didn’t enjoy that you’re going back and reworking or updating? And also, can you expand on what about GTFO makes it a game that’s missing from the market currently?

Viklund: Many who played the alpha seemed to enjoy failure. What I mean is people seemed to find it fun even when they didn’t succeed. The game is hard and punishing, but it compels you to try again and again and you come a little further every try. You can always try new combinations of weapons, gear, and strategies.

I think a lot of games today are leading the players by the hand and spoon-feeding them too much. It can be a well-oiled roller coaster, sure, but it will be the same thing every time. GTFO is a little bit different every time, and it doesn’t even give you a waypoint to move towards. I think people are intrigued by it and enjoy being challenged like that.

There wasn’t a lot of feedback that made us think about reworking much of the game, and most of it are things that we know are going to be addressed later anyway, like more types of monsters, tools, expedition “flavors,” etc. 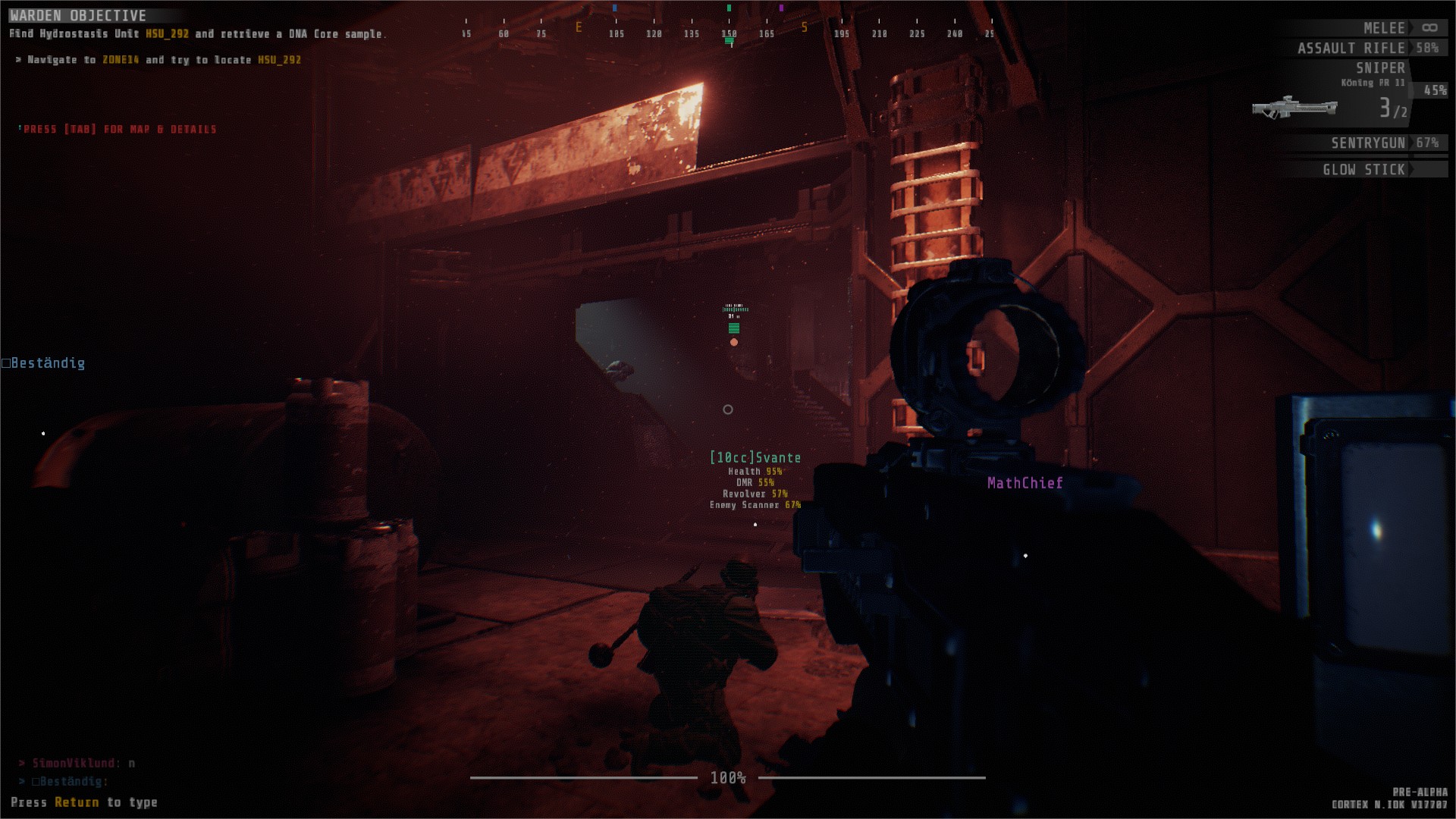 Yeah, I definitely enjoyed my time with the alpha, and I think my biggest critique would have been in regards to the lack of enemy variety. I think we talked on stream about some of the ideas you guys have, but are you’re willing to share some of the stuff you’re looking to add into the game down the line in terms of creatures and how they might interact with the player?

Viklund: We don’t want to reveal too much about the stuff that we plan to add later — especially the monsters we want to be a surprise. But I can say we’re thinking of every way we can mess with the players and not just have monsters move fast and take/deal a lot of damage but (rather) challenge players in new ways, force them to play with a different strategy or use a different part of their tool set.

One idea is to have monsters that you need to shine lights on as you move near them, or they’ll attack. A little bit like the weeping angels from Doctor Who, if you know about that show.

In our test with you, I think you mentioned at least a couple examples! There was an Alien: Isolation reference in there somewhere, adding in elements that would make sure players never felt too comfortable. Will you be leaning a bit more in the horror aspect of the game for the full release? I know during our test I was the most uneasy in the super dense fog areas.

Viklund: What’s horror is so subjective; it’s difficult to say. I think the game leans very hard into horror already with the scarce ammo and health, the darkness, the many monsters, and the constant tightrope you walk as a player in fear of triggering a wave of monsters… There will be more of that but also more action.

So not really looking to get into the jump scares and such like that, but more so the mentality of the player and keeping them as tense and aware as possible, right?

Viklund: Yes, GTFO will be more about tension and fear of failure in the expedition itself, rather than the fear in anticipating a huge scary face appearing on screen. GTFO isn’t a highly scripted experience where we want to set things up so that “when the player walks through this door then this thing happens;” it’s more open-ended and random. But that doesn’t mean we’ll avoid trying jump scares. We have some ideas for how to integrate it into the framework that GTFO provides.

How about the cooperative elements? You referenced it above in what people like about the game, and I too enjoyed the game not holding my hand with a waypoint. I think one of the coolest features in there right now is finding and using the consoles to narrow down your search area for the keycards you need to find to open doors. Are you able to talk about some of the other scenarios that will feature in the full release that will build on that?

Viklund: The computer terminals will play an increasingly large role in the game, no doubt. We love the concept and want to expand upon it! You’re currently able to use the consoles to find where you need to go to find expedition-critical items and resources like health and ammo, but they’ll be useful for other things as well — activating security systems that help you defend a certain room, maybe?

Temporarily close doors that you otherwise can’t close, maybe? In GTFO, there’s so much that the player is deprived of, so giving players a little of that through the terminals, tools, or consumables found in the environment is a great way to expand the player’s tool set and strategic possibilities.

Players are deprived of quite a lot in the game, you’re right. From the feedback on the alpha, will you be looking at balancing things like the amount of ammo players have, or did the feedback you got indicate it’s pretty balanced as is? Or will it change depending on which scenario you’re taking on?

Viklund: There will be scenarios where you have access to more ammo, but that means the expedition/scenario will throw more monsters at you as well. You’ll never see a stealth-heavy scenario, like the alpha expedition, where players are given enough ammo to solve every room by opening fire. That’s not GTFO. If you’re all about that sort of gameplay, there are plenty of other games that provide it.

That’s very true. I was definitely thinking about every bullet I had at my disposal in the alpha test, and I think it lends a lot to the overall atmosphere of the game.

I’m not sure that third one counts! Should just be communication, coordination, and crying.

Looking ahead, what’s the timeline you’re looking at for when players will get their hands on the game again?

Viklund: We have a beta test coming up, but we won’t give any dates; the community just has to be patient at this point. After all, the tests are for us, really. We know the players enjoy them, but they are for us as developers to find and solve problems with the game. We’ll launch tests when it’s needed for the sake of development.

So without getting too specific then, with the end of the year around the corner, are you still targeting 2019 or looking more at 2020 now?

I think that’s all the questions I have for now! I was very curious to see what the general response to the game was, as it is quite a bit different and much more challenging than even I was expecting after having seen the trailer and our previous interviews.

Viklund: We’ve always said the game was hardcore, and we wanted to kick the door in so to speak with the alpha expedition and show just how brutal GTFO can be. But there will be easier and slower expeditions as well. It’s never gonna be a game for everyone, but I think those who are into it are gonna love it intensely.

Sounds great, excited to see how it shapes up. Thanks for taking the time today, Simon!

Viklund: Thanks for having me!