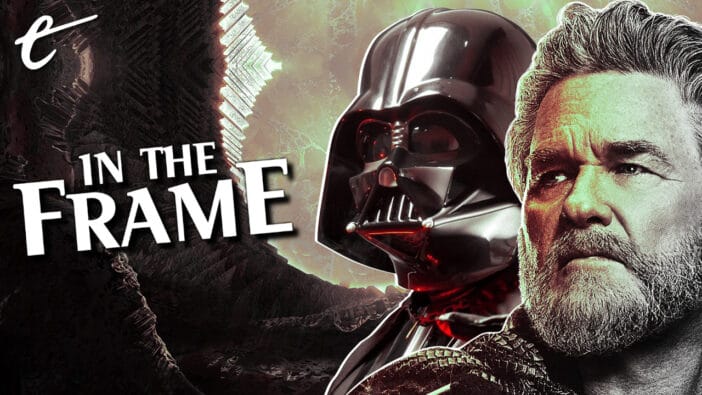 When James Gunn’s Guardians of the Galaxy was initially released, Star Wars was a stock point of comparison. This makes sense. It was a sweeping pop epic set in outer space and fundamentally a story about a young man trying to make sense of his world.

In Time, Richard Corliss described the blockbuster as “a bratty Star Wars.” In Esquire, Nick Schager declared that “the power of Han Solo is alive in Guardians of the Galaxy.” In Forbes, Scott Mendelson described the film as “a great Star Wars movie in the same way… Galaxy Quest was a great Star Trek movie.” In The Los Angeles Times, Kenneth Turan argued that Gunn’s space opera was irreverent in ways that “bring the first Star Wars to mind.”

There were undoubtedly strong thematic echoes of the original Star Wars in the first Guardians of the Galaxy movie. In particular, the film is interested in dysfunctional familial dynamics. The heart of the movie is the relationship between Peter Quill (Chris Pratt) and an absent parent, his deceased mother Meredith (Laura Haddock). Similarly, Gamora (Zoe Saldana) struggles to escape her abusive, galaxy-threatening father Thanos (Josh Brolin).

However, these generational and familial themes really resonate in Gunn’s follow-up, Guardians of the Galaxy Vol. 2. While Meredith’s absence shapes the original film, the sequel is largely driven by Peter’s reunion with his biological father, Ego (Kurt Russell). This neatly mirrors the way in which the emotional arc of the original Star Wars trilogy hinges on Luke Skywalker (Mark Hamill) resolving his complicated relationship with his father Darth Vader (David Prowse, James Earl Jones). 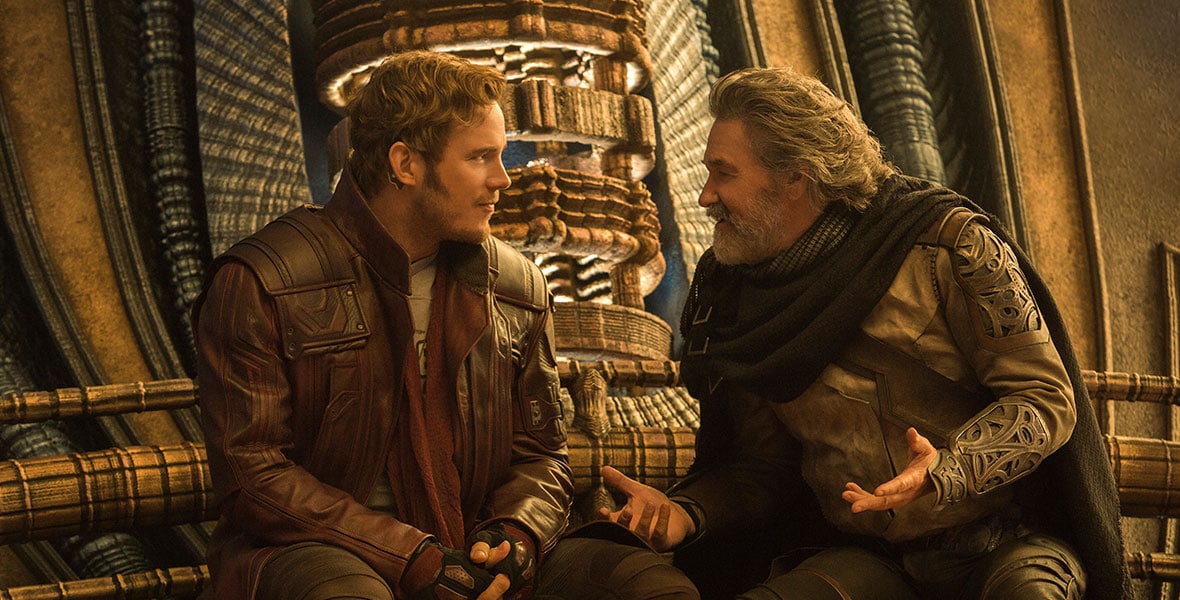 Star Wars was rooted in the culture of the 1970s. George Lucas conceived of the series as a metaphor for the Vietnam War. However, its themes resonated in other ways. While Luke’s difficult relationship with his absentee father harked back to the Campbellian monomyth, it also reflected a turbulent period for the American family. Lucas’s friend Steven Spielberg conceded that his 1975 science fiction epic Close Encounters of the Third Kind was shaped by his parents’ divorce in 1966.

In November 1975, historian Christopher Lasch noted that the perceived crisis of the American family had become “an academic industry.” Divorce rates climbed dramatically during the decade. In 1970, the rate was 3.5 divorces for every 1,000 Americans, jumping to 5.3 by 1979, with 1,193,062 divorces that year. According to sociologist W. Bradford Wilcox, “approximately half of the children born to married parents in the 1970s saw their parents part.”

Divorce was so inescapable that the January 1973 PBS documentary An American Family, which had been intended as a study of the modern middle-class American family, inadvertently became “the drama of a family in the process of coming apart” when its subjects decided to separate. This trend contributed to a generation of latchkey kids. Pointedly, the spread of “no-fault divorce” across the United States during the decade led to an increase in the number of men divorcing their spouses.

Guardians of the Galaxy Vol. 2 opens in 1980, just at the end of this turbulent decade. The charismatic alien known as Ego has landed on Earth. He has seduced a young human woman named Meredith. They seem to be truly in love. The film then jumps 34 years into the future. When pressed by the Sovereign (Elizabeth Debicki), Meredith’s son Peter is forced to concede that he has no idea who his father is. Gamora knows Peter well enough to know that he is still “sensitive” about it. 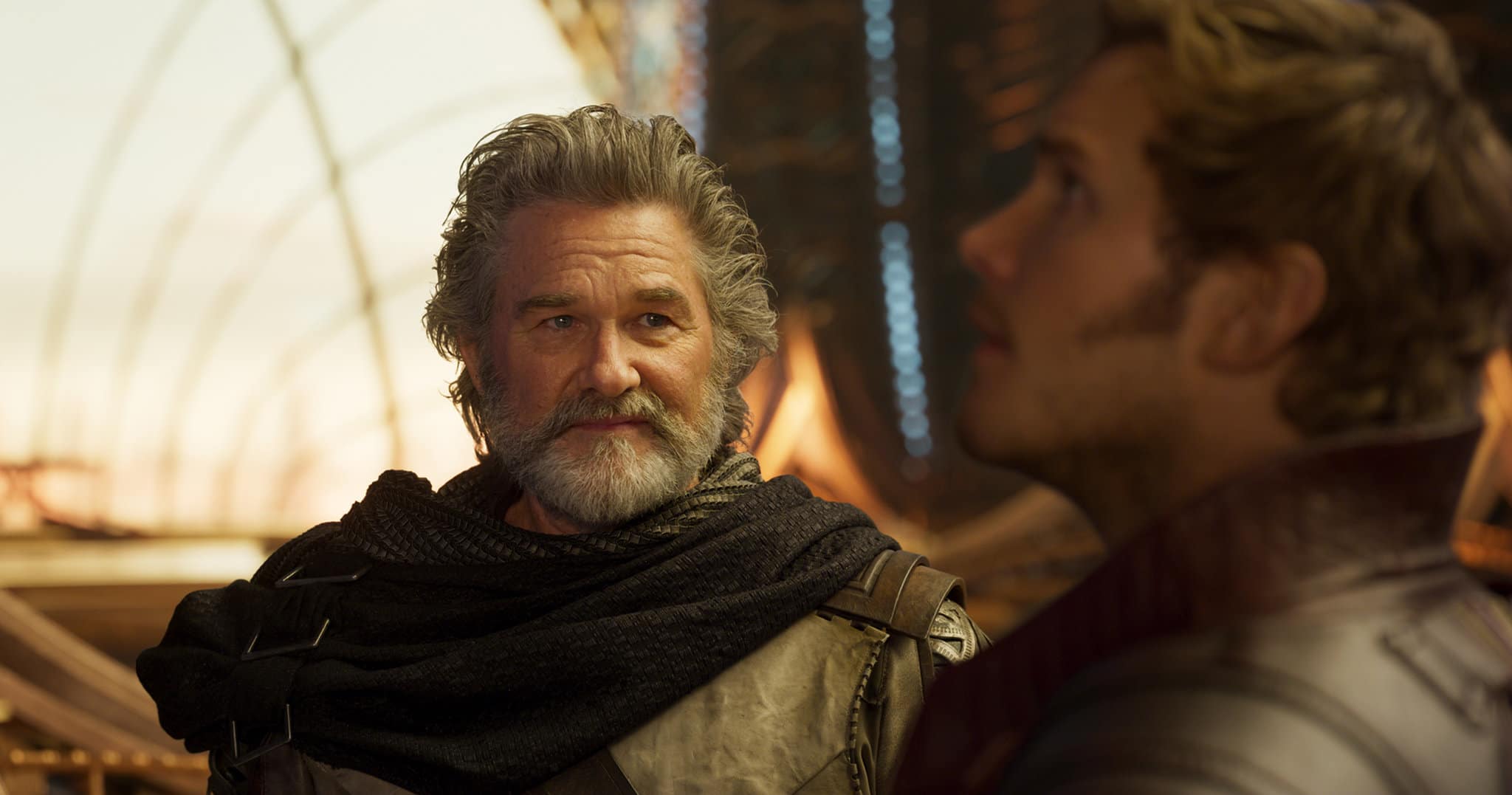 The film’s plot is driven by a belated reunion between Peter and Ego. Ego claims that he has spent decades looking for Peter, hoping to reconnect with him. Though initially cautious, Peter takes the opportunity to get to know the man whose absence has shaped and defined his life. He confesses to Gamora that what he always wanted, “more than anything in the world,” was the father-son relationship that his friends took for granted “off playing catch with their dad.”

When Ego takes Peter and his friends back to his home planet, the film presents him as something close to a divorced dad working through his midlife crisis. He lives with a much younger woman named Mantis (Pom Klementieff), whose primary function is to “help him sleep.” His home is lavish, an entire planet — although he boasts with “humility” that it’s “no larger than … Earth’s moon.” It even includes a hall of dioramas that reflect Ego’s own mythology back at him.

Initially, Ego seems to provide the purpose that Peter had sorely lacked to this point in his life. Ego tells the young man about his “very special heritage.” Ego is a Celestial, akin to a god. “Small ‘G,’ son,” Ego clarifies. “At least on the days I’m feeling humble.” Peter discovers that he has inherited some of Ego’s power. Peter can warp reality itself. The two even get to play catch with balls of energy. It is a fantasy of familial reconciliation between an absent father and the son he abandoned.

There’s something appealing in this narrative. It is the culmination of Luke’s relationship with Vader in Return of the Jedi. Luke risks everything in the hope of redeeming Darth Vader. The villain ultimately sacrifices himself to save Luke, and Luke accepts this as proof his father was a good man underneath it all. Darth Vader conveniently dies before the two have to navigate any of the actual hard work of reconciliation. It seems more important that Luke believes his father was redeemed. 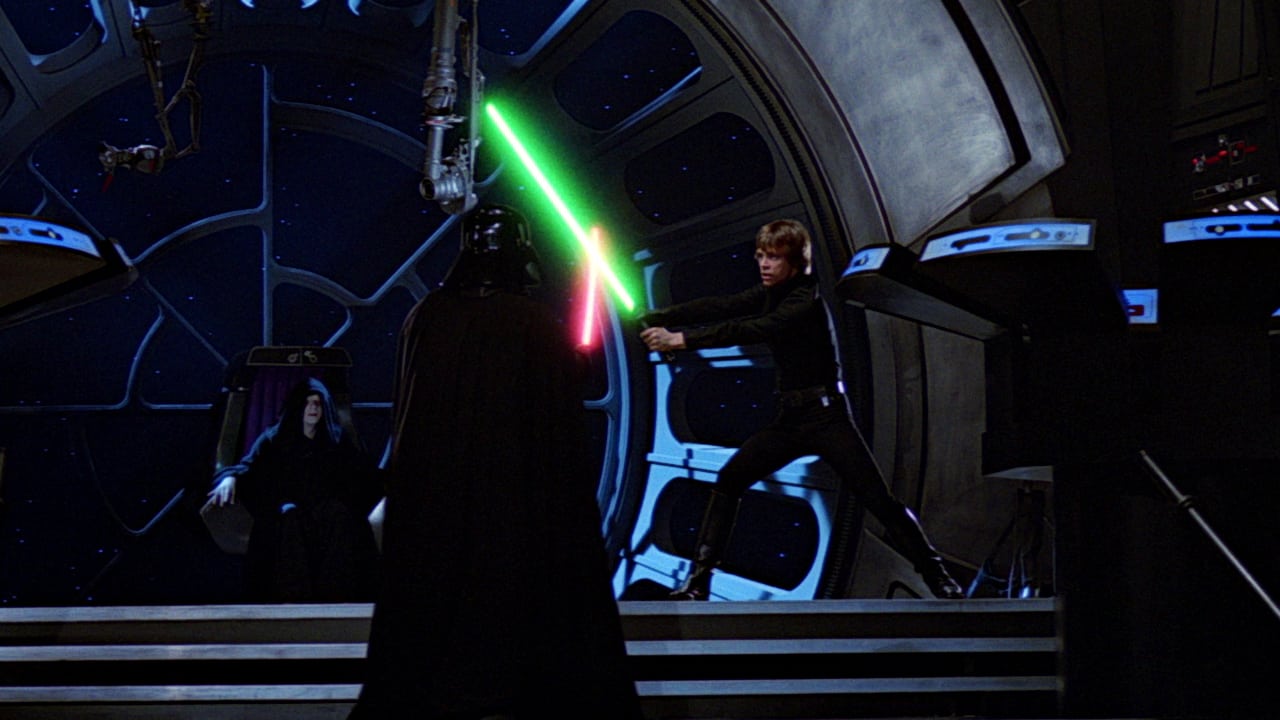 In some ways, Guardians of the Galaxy Vol. 2 is a pointed interrogation of the ending of Return of the Jedi. It understands that this sort of reconciliation needs to be a two-way street, that it isn’t enough for the son to want the father to be redeemed. As the character’s name implies, the reunion is ultimately all about Ego. Ego cannot conceive of Peter as anything more than an extension of himself. It is similar to Vader’s plot to use Luke to overthrow the Emperor (Ian McDiarmid).

Ego plans to channel Peter’s power, using it to terraform the universe. His evil scheme is “to grow and spread, covering all that exists” until everything is a reflection of himself. The spread of Ego’s influence is presented using the visual language of cancer growth — the disease that consumed Meredith. This is appropriate, given that Ego gave Meredith the cancer that killed her, because he could not fathom surrendering his “purpose” and “meaning” by giving himself to another person.

There is a reconciliation between father and son at the end of Guardians of the Galaxy Vol. 2, but it is not between Peter and Ego. It is instead between Peter and his surrogate father, Yondu (Michael Rooker). Yondu was the alien who kidnapped Peter from Earth, under contract to return the boy to his biological father. However, Yondu instead kept Peter and raised him. Parallel to Peter’s journey, Yondu also faces a reckoning with his own mistakes and his own efforts to make things right.

Ultimately, Peter rejects the birthright offered by his biological father. “You are a god,” Ego pleads with his son. “If you kill me, you’ll be just like everybody else.” Peter is not swayed. He simply responds, “What’s so wrong with that?” It’s a striking and deliberate character beat, particularly in the context of the larger Marvel Cinematic Universe, where characters are often reluctant to surrender power. 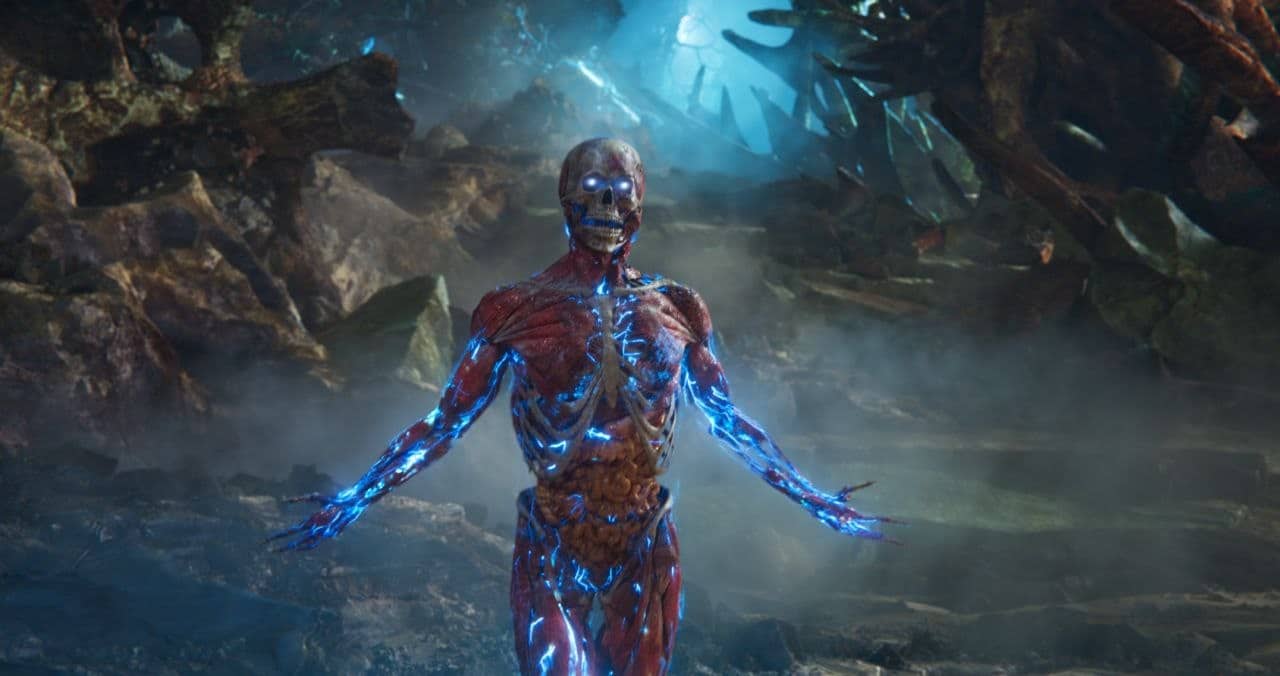 Iron Man 2 is about Tony Stark (Robert Downey Jr.) insisting that he does not answer to democratic authorities. Captain America: Civil War presents Steve Rogers (Chris Evans) refusing to submit to oversight. Even Spider-Man: Far From Home is a movie about how teenager Peter Parker (Tom Holland) is really the safest pair of hands for a fleet of killer drones. With that in mind, Peter Quill’s decision to reject godhood and embrace his mortality is oddly heartening.

It is particularly resonant in the context of the movie’s original release. Guardians of the Galaxy Vol. 2 arrived in theaters in May 2017. Blade Runner 2049 was released five months later. In that long-gestating sequel, a young replicant named K (Ryan Gosling) searches for purpose. He comes to believe that he is “special,” a child who was “wanted, loved.” It is similar to Peter’s fantasy in Guardians of the Galaxy Vol. 2. Ultimately, K also discovers that this belief is a lie and must find his own way.

To tie it all back to Star Wars, both Guardians of the Galaxy Vol. 2 and Blade Runner 2049 grappled with themes that came to the fore in that Christmas’ release of The Last Jedi. In that film, Rey (Daisy Ridley) wrestles with the mystery of her own parentage. She believes that her parents must have been important people and that discovering their identities will give her life meaning. Rey hopes that she will become special because of her lineage and her bloodline.

The Last Jedi reveals that Rey’s parents were “filthy junk traders who sold (her) off for drinking money.” (Of course, like so much of The Last Jedi, this revelation would be clumsily reversed two years later in The Rise of Skywalker.) The revelation that Rey is “Rey from Nowhere” is similar to K’s discovery that he is not “a miracle” in Blade Runner 2049 or Peter’s decision to be “just like everybody else” in Guardians of the Galaxy Vol. 2.

These are reminders that value is found in oneself, not something bestowed by circumstance of birth. As such, Guardians of the Galaxy Vol. 2 offers its own distinct update on the generational and familial anxieties that simmer through the larger Star Wars franchise.