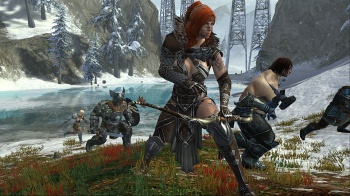 Nearly half a million invade Tyria before the borders officially open.

During its recent Headstart Weekend, Guild Wars 2 gave its servers a good workout. Apparently, a really good workout. ArenaNet recently announced that Guild Wars 2 reached over 400,000 concurrent users at some point during the three days prior to the game’s actual launch date.

ArenaNet has also revelaed that Guild Wars 2 launched with over one million copies of the game pre-purchased, a number that doesn’t even reflect the pre-orders shipping at launch. Those sales don’t show signs of slowing either; currently, the game sits atop Amazon’s Best Sellers List with two alternate editions populating positions 3 and 5.

“This is the culmination of a five-year journey and to be greeted by this level of enthusiasm by our fans is truly amazing,” said Mike O’Brien, president and co-founder of ArenaNet. “But really our work is just beginning. Now our focus is shifting to building on this living world we’ve delivered, continuously refining our game and improving services to ensure our players have the best possible experience.”

Still, hosting so many concurrent users doesn’t come without its own share of problems, as multiple reports of login issues have already begun to crop up. ArenaNet is aware, and already working on resolving them.