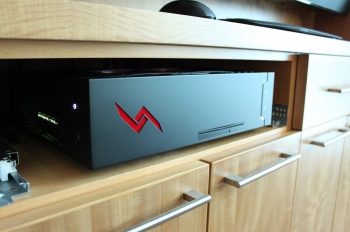 Digital Storm has been in the custom PC game for a long time, but now is as exciting a time as ever for the Bay Area boutique manufacturer. The original Bolt was well-received, and the Bolt II, due out next month, is looking to improve and build on what its older brother strived for: portability, versatility, and upgradeability.

The Bolt II is a little larger than the Bolt I, but the added height is put to good use. Airflow is one of the chief concerns when designing a custom PC case, and the Bolt II uses the added inches to create air vents on the bottom of the machine, right underneath the 700W, 1U server power supply. Any added width is negligible, especially when you’re eyeballing it.

The case uses some of the same tricks as the Bolt I, but it’s a more sleek, squared-off look. There’s no more angle on the front, and the entire chassis is designed and built in Northern California. The new case, while perfectly happy standing up straight, can also be set on its side, thanks to braced side panels and detachable metal feet. The horizontal orientation makes the Bolt II all the more living room friendly.

Despite its relatively small size, the Bolt II has all the latest PC hardware a gamer could want. My demo model had a GTX 780 TI inside, along with a Core i7 Haswell chip, 700W power supply, and an Asus ROG mini-ITX motherboard. All Bolt II models will come with liquid cooling standard (via a 240mm radiator), and there’s space for three optional 80mm fans up top as well. The GPU attaches to the motherboard via a flexible PCIe ribbon cable, which allows the card to sit above and facing away from the motherboard. Digital Storm says any single-GPU card will fit in the Bolt II, while dual-GPU cards like the 6990 might be a little snug. The ribbon cable makes GPU removal a snap – pop out the four bracket screws, and the GPU housing slides out effortlessly. The same design is used on the radiator housing, and the hard drive cage.

Speaking of hard drives, the Bolt II has two bays, and each bay can hold one 3.5-inch hard drive, or up to two SSDs. The dual-bay setup means you can RAID 0 two SSDs for your OS (or dual boot if you want Windows and SteamOS), while keeping all of your games and other files on a 2 or 4 TB drive below.

As far as SteamOS is concerned, Digital Storm will make the Valve operating system a free option on the Bolt II. They can partition one drive to hold SteamOS and Windows, or you can drop each OS on its on drive. And make no mistake here: The Bolt II is aimed squarely at the living room. There’s no doubt that this SSF (Small Form Factor) machine will be right at home on your desk, too, but it looks pretty comfortable sitting underneath an HDTV. SteamOS was loaded on our demo machine, complete with Half-Life 2 Ep. 2, and the Bolt II is one of the few Steam Machines coming out closer to the beginning of 2014. During the Steam Machine event last night, many of the hardware partners on-hand were talking ‘second half of 2014,” so Digital Storm has a real opportunity here to get ahead in the marketplace.

The only real sticking point for me is the starting price. The official entry price seems to be $1,899, although there are rumblings it could drop closer to $1,500 before launch. That’s a lot of money for a PC running “only” a GTX 760. With that in mind, you’ll be hard-pressed to find an SSF machine with such a well-engineered case, and Digital Storm customer support is hard to beat as well.

Expect the Bolt II in Q1 (likely next month), and it will be available in black, white, black vinyl, and an assortment of custom (but pricey) color options.