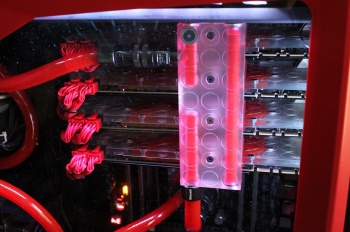 When was the last time you actually got excited about a computer case? The Thermaltake/BMW case I talked about in the Razer Christine article is a start, but every other product is a sea of radiator options, power supply chambers, and 200mm fans.

Not only are PC cases decidedly boring, other than what color you want, but choosing one is the most agonizing aspect of building a PC, whether you’re building your own or going through a builder. Do I want one with a window? How should the motherboard be oriented? Do I need a full tower or a mid-tower? It’s not as easy as choosing a CPU or GPU.

But Origin PC is looking to change all of that with its new Millennium and Genesis desktop PCs. Both models are part of Origin’s new singular case ecosystem, codenamed Prime. In development for two years, Prime is essentially a modular case design, allowing the user to put exactly what he/she wants into a case. The Millennium is the mid-tower variant, offering space for up to five hard drives, an additional two SSDs, 4-way SLI, and a complete liquid cooling system – even for four video cards. The modular aspect comes into play with motherboard orientation, radiator placement, and other internal case choices – instead of buying a case that gives you one option for motherboard orientation, you’re getting one that technically gives you four at once (standard ATX mount on the left or right side of the body, or vertically mounted on the left or right). Even the case door hinges can be swapped from side to side, allowing the case to be positioned and set up in just about any configuration you could want.

The full tower Genesis case is the Popeye version of the Millennium – it’s the exact same case, but with a detachable chamber on the bottom. This chamber can house up to 12 hard drives, or dual 360mm radiators, for those using a liquid cooling solution on four GPUs and a CPU. If a Millennium PC owner wants to upgrade his chassis to a full tower, he/she can just order the bottom chamber from Origin, and – several screws later – you’re upgraded to a full tower.
The Prime system is symmetrical, too, which means body panels can be swapped from the left side to the right. This also means case windows can go on either side, giving users about as much customization as they can handle.

Both the Genesis and Millennium are already on sale, but you’re buying a complete system here (Origin PC doesn’t plan on selling the case separately), with the Millennium starting at around $1,650 (that gets you a core i5 CPU, GTX 650 Ti GPU, 500W power supply, 8 GB of RAM, and a 500 GB hard drive). The Genesis, bottom chamber included, comes in under $1,900 (with the same specs as the Millennium). Both systems have estimated ship dates of January 30th.