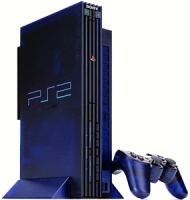 Ten years ago today, Sony’s PlayStation 2 hit shelves in Japan in a launch that would go on to produce one of the most successful consoles of all time.

All of these games are beloved in their own right, and all of them – and many more – had a home on Sony’s PlayStation 2, the best-selling console of the last generation and easily a contender for the single best console ever.

First unveiled by Sony in 1999, the PS2 hit store shelves exactly ten years ago today, on March 4th, 2000. Though plagued by hardware shortages and a lack of good launch titles (hey, sound familiar to any other console launches? Oh, you mean all of them?), the system would end up rebounding to choke Sega’s Dreamcast out of the market and leave Microsoft’s Xbox and Nintendo’s Gamecube soundly in its dust.

Later that year, the PS2 came to the West, hitting US and EU stores in October 26 and November 24, respectively, and went on to sell over 140 million units – so the next time Microsoft and Sony want you to believe that the PS3 and Xbox 360 are cool for selling however-many-they’ve-sold, tell them that they’re just posers.