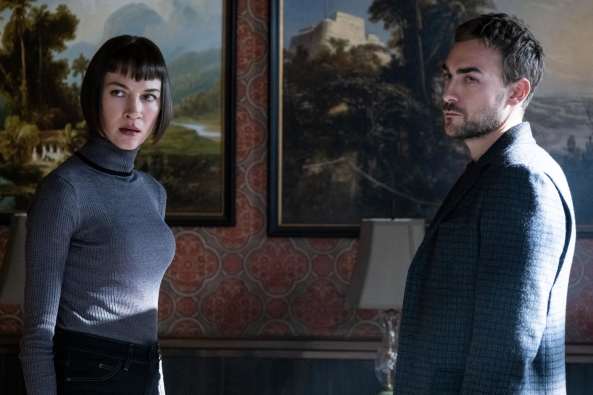 The last live-action remnant of Marvel Television is finally arriving. Helstrom, which will stream on Hulu, has received its first trailer featuring the titular family and their demonic struggles with the dark world. However, the trailer doesn’t mention Helstrom‘s comic book roots or Marvel connections at all. In fact, given the horror aspects of the series and the copious shots of a mental ward, the marketing feels very akin to another leftover Marvel property, The New Mutants.

Tom Austen and Sydney Lemmon are the Helstrom siblings, Daimon and Ana/Satana, in the series. In the comics, their father is Satan himself and the characters are closely tied to Ghost Rider, but the show is taking a bit of a different slant (or so it appears) with their father being an evil serial killer and their mother being possessed by a demon. The pair appear to be fighting against an evil demonic invasion of some sort while hammering out some family issues. They’ll be joined on this quest by Caretaker (Robert Wisdom), who has deep understanding of the occult, and Dr. Louise Hastings (June Carryl), a psychologist. The cast is rounded out by Ariana Guerra and Alain Uy.

This series was originally supposed to be part of Marvel Television’s planned “Adventures into Fear” programming that was going to kick off with Ghost Rider. However, those plans were scrapped with the folding of Marvel Television, and Ghost Rider was canceled due to creative differences between Hulu and the creative team. That leaves Helstrom to stand alone, and apparently so disconnected from the MCU that they aren’t even calling it Marvel’s Helstrom. It’s possible that Marvel requested this to avoid confusion/competition with its streaming offerings on Disney+, though Disney owns both platforms.

This isn’t the only Marvel content coming to Hulu, however. Though we haven’t heard much on them, the streamer will play host to a series of animated Marvel shows: Howard the Duck, MODOK, Hit-Monkey, Tigra and Dazzler, and The Offenders. Just when these shows will arrive is still unknown, but MODOK is going to have a panel at this year’s NYCC.