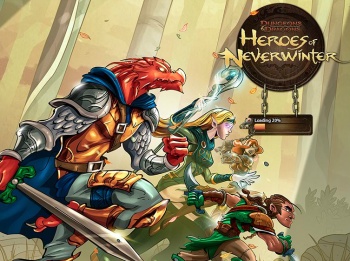 Heroes of Neverwinter, the new Dungeons & Dragons games on Facebook, is now in open beta and it actually doesn’t suck.

When you think of Facebook games, you probably think of FarmVille, or CityVille, or maybe Mafia Wars if you want to go a little less mainstream, but no matter what individual titles spring to mind the one commonly-held perception is this: they suck. At the very least, they’re mindless; at worst, your Facebook friends are constantly bombarding you with requests to go dig for treasure on their stupid island.

But Heroes of Neverwinter, believe it or not, doesn’t suck. It’s not the next coming of Neverwinter Nights and if you go into it looking for a BioWare-caliber RPG you’re going to be disappointed, but as a simplistic, social dungeon crawl, it’s not too bad at all. And it’s now in open beta so you can take it for a spin yourself.

Gameplay is fairly simple, with the post-Ruining town of Neverwinter serving as a hub for a series of trips through small, angular dungeons. Parties are limited to characters of four, combat is turn-based and exploration options are awfully limited, but a full range of spells and abilities are available to the four classes currently on tap and players can take their friends adventuring without needing to have them online. The game does allow players to improve their lot in life via microtransactions, but at least through the early stages it’s certainly not necessary.

It’s still a bit rough around the edges – this is a beta, remember – but all in all it’s surprisingly entertaining and Liquid, the team behind the game, says it’s continuing to fine-tune it and add features based on player feedback. It’s not often that you’ll see me getting behind a Facebook game, but this one’s worth a look. Check it out at apps.facebook.com/neverwinterheroes.