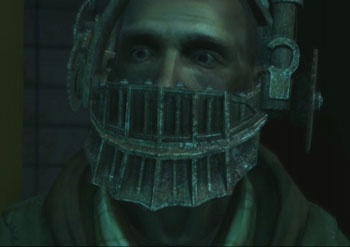 I have a secret mission whenever I attend E3: to find the clunkers. E3 is a vast, sprawling affair, with hundreds upon hundreds of game stations set up across its many booths, and what to put in those stations requires careful thought and consideration. Do you put the same game in many different play spots, so that more people can give it a try, or do put many different games there, to display a variety of offerings? The right answer depends on who you are and how much room you’ve got, but without fail, every year, valuable real estate is given up to games that simply shouldn’t be there. Maybe they’re broken. Maybe they’re baffling. Maybe they just plain suck. Whatever their particular backstory, I make it my mission to track them down every year, if only for my own personal amusement and sense of individuality. Any E3 attendee can say they played Twilight Princess, but how many of them gave Shuffling Roses a try? (It’s a tango game, in case you were wondering.)

This year, I must confess, I utterly failed in my mission. I thought I had it nailed, I really did – I saw a prime candidate for suckitude given not one, but two spots in Konami’s booth. As I put down my bag and put on the headphones, I smiled knowingly to myself, because I knew, with my years of experience, that this game would be the butt of many jokes to come. Because, really, how good could the Saw game be?

Actually, pretty darn good. Yeah, I know, I’m as surprised as you are.

Saw takes place between the first two movies in the franchise. You play as the Danny Glover character, waking up to find that you’ve been strapped into the reverse bear trap. This is where the demo begins, with Jigsaw telling you how your obsession with catching him is ruining your life and you have to make your choice and blah blah blah – you know how he is. Your first goal is simple and obvious: rotate the left thumbstick to get yourself out of the trap before it goes off and rips your head apart. I sighed and followed the on-screen prompt to twirl the stick, unimpressed by this insultingly easy first puzzle.

And then the trap went off and made me into something resembling a broken Pez dispenser. Hmmmm.

Ok, ok, I must’ve not rotated the stick correctly. So I tried again. And failed again. And again. Aaaaand again. What the hell was going on? I was doing as I was told, but still failing. As I waited for the demo to load after the bear trap sprang yet again, I glanced over at the folks on my left, who were having the same trouble I was. And that’s when I saw it – a small square lighting up on the side of the bear trap. How could I have missed it? Now that I knew what to look for, beating the first puzzle was a breeze – twiddle the thumbstick and hit the button indicated when the light flashed. And just like that, I was free.

Clearly, Saw was going to be a more subtle experience than I had expected.

As the demo continues, you discover that you’re locked in an asylum and the key to your freedom has been sewn up into your gut. Worse, you’re not alone; you’ve got plenty of unwilling companions, each playing their own deadly game with Jigsaw. Sometimes the other prisoners help you, sometimes they attack you, and sometimes their fate is entirely in your hands. In one section, I had to work with another prisoner to unlock doors before we were both blown to smithereens. I had to fish a fuse out of a toilet filled with syringes, he had to flip the switch that would unlock the doors. Not sure why he got off so easy, but I’ll probably find him hanging from a hook later in the game, or something. It is the Saw universe, after all.

Unfortunately, the sound dropped out at several points during the demo, though that didn’t prevent me from solving any of the puzzles or developing a very genuine feeling of unease as I crept through the dingy halls of the asylum. The sense of uncertainty and fear is quite real as you slowly open doors and peer around corners; some doors are rigged with shotguns, requiring you to constantly be on your guard, ready for anything. At first, your only lightsource is a puny little Zippo, which does little more than emphasize just how much of your environment is covered in darkness. Oh, and you’re in your bare feet, which is, oddly enough, plus ten to scary.

So color me humbled. I assumed Saw would be complete crap, but instead discovered that not only was genuine thought and care put into its creation, but also that said thought and care apparently worked. True, I failed in my mission at this year’s E3, but I was reminded that fun games can come from just about anywhere – even horror movie franchises.

OnLive at E3: It Works