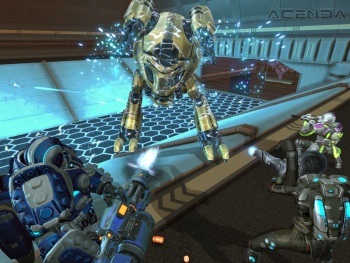 I might as well come clean: There’s probably no genre of videogame less adapted to the harsh, overstimulating conditions of the Los Angeles Convention Center during E3 than the MMOG. Some games are built from the ground up with 10- to 15-minute play sessions in mind; in an MMOG, you could easily spend that amount of time on the Character Creation screen. Even more crucially, an MMOG lives and dies by the strength of its community, an asset that a pre-release E3 demo will be sorely lacking.

That said, MMOGs had a strong presence at this year’s convention, and not just of the traditional Orcs & Elves variety. Of course, there’s Star Wars: The Old Republic, a title that seems to be growing more ambitious by the day. But after roaming the show floor and sampling the selection, we’ve come up with another four up-and-comers to watch in the next year or two that you might be a little less familiar with.

While MMOG enthusiasts waited patiently for MMOFPS Huxley to emerge from the fog of vaporware, Hi-Rez Studios have been hard at work on Global Agenda. No, it’s not the schedule of events for a U.N. General Assembly meeting; it’s a massively multiplayer online third-person shooter set in a sci-fi world where rival factions face off against a totalitarian government. It’s clear that the developers see this high-tech setting as a major selling point of the title – witness this trailer, where Global Agenda‘s Recon class faces down a hapless elven mage.

In addition to the Recon – a sort of rogue archetype in the world of Global Agenda – there are three other classes to choose from: Assault, Medic and Robotics. Assault is the default combat class of the bunch who wears the heaviest armor; Medics have access to both healing abilities and powerful damage-over-time toxins; and Robotics specialists can construct turrets and force fields to support their party. I spent a little time with the Assault class in a PvE instance meant for larger groups and had a blast. Immediately, it became clear that Global Agenda is as much a shooter as it is an MMOG – it doesn’t take long before you remember to crouch and strafe when you take on an enemy, since staying still usually results in a quick death.

Unfortunately, I didn’t get a chance to experience the game’s PvP system, which probably would have been far more representative of the actually gameplay than soloing a PvE instance as a max level character. But given the game’s reflex-based combat, it will likely be a big draw for FPS players who want to dive into an MMOG – and elven mages who are getting a little tired of juggling fireballs.

Most MMOGs talk a lot about customization, but APB, from Crackdown developer Realtime Worlds, takes that talk very, very seriously. The level to which you can custom design your character is staggering – this goes way beyond a few hairdos and noserings. They were very careful to restrain alterations with realism. Increase your character’s weight and he gets love handles instead of inflating like a balloon. Change skin color doesn’t simply dunk your avatar in a bucket of paint, but rather delicately adjusts skin pigment and tone. Scars, hair length, eye color, ear size … you could spend days just tweaking and re-tweaking your character’s appearance.

APB will also include a robust system for creating “symbols,” images you can then turn into tattoos, clothing designs or car decals. We’re not talking simple stars or words, either, but incredibly intricate designs that would look at home on Ed Hardy T-shirts. Of course, while some players will embrace that freedom to make beautiful and amazing graphics, you just know there’s going to be a gang calling themselves the Penis Crew or something. Even more ripe for abuse is the ability to design your own “death tune,” a little ditty that players will hear whenever you score a kill. Personally, I’d go with a chiptune version of “Wannabe” by the Spice Girls.

The core concept behind APB is pretty simple: You choose to be either a law-defending Enforcer or a law-breaking Criminal. You’ll receive missions from NPCs that are higher up in your particular organization, and be matched up in PvP situations against members of the opposing side. So, a Criminal may get a mission to rob a bank; as he’s he committing the crime, an Enforcer will “get the APB” and be matched up with him and try to prevent him from finishing the mission. Cue gunfight!

There wasn’t much actual APB gameplay to see yet, but Realtime Worlds has some very unique ideas about new ways to keep its MMOG exciting and vibrant. And, depending on the players, very, very annoying. 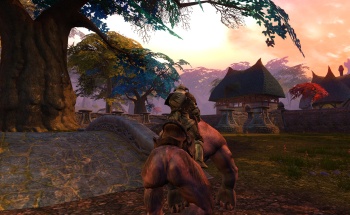 Heroes of Telara, the first title from upstart studio Trion World Networks, is barely more than a twinkle in a designers eye at the moment, but what little the developer did show off was pretty impressive. Unlike Global Agenda or APB, it takes place in a traditional fantasy setting – our guided tour through the game world followed a lone warrior as he walked between a walled city and an open-world environment filled with nasty bandits. Sure, it was the WoW equivalent of walking from Stormwind to Goldshire – not much of a change in scenerey – but the art and animations were quite striking.

The representative from Trion had a lot to say about new server technology that the company had developed and will be implementing in three new titles (including Telara). According to Trion, their platform distributes server processing power dynamically rather than geographically – if an in-game event causes a mass of players to congregate in one area, the back-end technology will scale to accommodate them. In theory, that means less lag and drop-outs in highly trafficked areas, but without a Telara beta in sight, there’s no way to judge the veracity of this claim.

When it came to specifics about Telara‘s gameplay, Trion had a bit less to say. But the one glimpse of innovation we got was intriguing: In Telara, each class has a number of subclasses that a player can “equip” through a kind of card system, granting them unique buffs and a few new abilities. Even better, some elite enemies actually drop cards that grant players a couple of their own abilities. The demo we watched showed our intrepid warrior taking down a kind of necromancer and gaining the ability to summon some skeletons of his own. Here’s hoping the rest of the gameplay features some equally unique ideas.

Thanks to my older brother, the first genre of videogame that I really dove into was the flight simulator. I started with Chuck Yeager’s Air Combat and quickly broke free from the bonds of gravity in TIE Fighter and Descent. And then … nothing. Maybe the genre got sucked into a black hole, or maybe people simply got sick of having to hook up a joystick and a throttle to be able to play a game the way the designers intended.

Colorado-based developers NetDevil are aiming to change that with Jumpgate Evolution. One look at their demo setup at E3 would have made my adolescent self green with envy: Three widescreen monitors, a mouse and keyboard and, best of all, a joystick and throttle for the flight-sim stalwarts who want an experience as close to flying a real space fighter as we’re likely to ever get. In fact, the monitor setup was so overwhelming that I actually felt sick to my stomach at a couple points.

Over the course of a half hour, I flew around in one of Jumpgate‘s two PvP zones, called “The Descent.” As the name might suggest, it takes place in an enclose (but still zero-G) environment that felt pretty close to its namesake. Simply navigating the occasionally tight corridors was a thrill – I could feel my flight-sim chops slowly returning with each jarring crash into the wall.

The NetDevil designer who walked me through the demo was quick to explain the recent delay of the title, which was originally scheduled for release this month. In his words, the game is feature complete, but the team is still working on balance (a moving target in any MMOG) and making the PvE quest system a bit more engaging. In the build I played, quests were relatively predictable affairs – you went to a mission hub, spoke with the portrait of an NPC and off you went. The team wasn’t satisfied with that presentation, so they’re taking some extra time to make sure the game’s PvE content keeps players on their toes.

A little extra polish goes a long way when it comes to MMOG releases; the extra months of development will no doubt benefit the game immensely. And if you’re a hardcore space-sim fan worried about the delay, just remember: What else have you got to wait for?

OnLive at E3: It Works