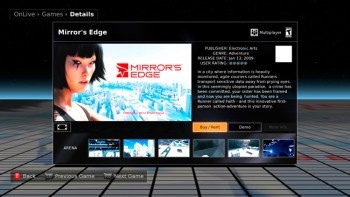 OnLive, the almost too-good-to-be-true streaming game technology unveiled at GDC this March, didn’t have a booth at E3. Instead, they had a swank loft apartment a few blocks away from the convention center equipped with a standard residential broadband connection, an HDTV and a couple different ways to access their gaming service: a MacBook Pro with the OnLive software installed, and the OnLive “MicroConsole,” a stand-alone interface with an HDMI output and support for up to four wireless controllers.

Their stated goal was to test the nascent platform under real-world conditions, with all the bandwidth dips and wireless interference that entails. But it was clearly also an opportunity to show off their service to a new audience and to remind the naysayers that the technology is progressing as planned (unlike, say, Duke Nukem Forever or the Phantom Lapboard).

An OnLive executive went over some of the details with me: The apartment was located approximately 300 miles from the company’s servers. The cable connection had a bandwidth of roughly 4 to 6 Mbps downstream. And, crucially, the service is currently accessible to 100 players in a closed beta that will soon expand to 1,000 participants.

Over the course of about a half hour, I played three games on the service: two popular first-person shooters on the Mac client and a racing game on the MicroConsole. The company asked me to refrain from naming specific titles, but the names aren’t important anyway. What’s important is this: It works.

No, it’s not perfect. I noticed both some slight input lag and minor degradation of the image quality resulting from compression. (The service scales the image resolution according to your connection speed – the higher your bandwidth, the more crisp the graphics will look.) But these faults hardly detracted from the overall experience of playing what are normally incredibly hardware-intensive games with practically no hardware at all.

The same OnLive executive told me the company is beginning to look into pricing models that will appeal to both consumers and publishers. If they can find a model that hits that sweet spot between those two parties – and if their hardware continues to perform at the level it did last week – then OnLive very well could be the paradigm shift in gaming that it claims to be.