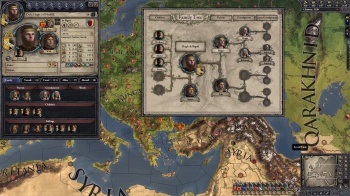 The grand strategy game has become popular for it’s story-driven nature, but takes it cues from such games as The Sims. The result is something akin to a replayable Game of Thrones.

The most inspiring line of the “Emergent Narrative In Crusader Kings 2” presentation at GDC was this: “…a warrior saint who weeps over the corpses of her dead family.” It’s the last line from an “After Action Report” on the Paradox forums. The quote isn’t inspiring because of its tragedy, but instead, because it’s the perfect representation of Crusader Kings 2 project lead Henrik Fahraeus’ thesis in the presentation: that with the proper mixture of non-player actors, open-ended gameplay, conflict, randomization, AI actors with personality, and just a bit of scripted narrative, a game can become a surprise hit.

That’s certainly the case with CK2, which has built both its sales and critical reputation over time, as more and more people have realized its potential as a story generator. I’m certainly one of them, so I was keen to hear more about the process behind the creation of such an impressive game.

Fahraeus began by explaining the four different types of narrative that he saw: linear, branching, improvised, and emergent. The last is gameplay where the story derives naturally from the interaction of the game’s systems, a common feature in strategy games, “and also huge blockbusters like The Sims,” he said. Indeed, The Sims was one of the models used to create the original Crusader Kings, as Fahraeus showed on a slide, combined with Game Of Thrones and the classic 1980s strategy game Lords Of Midnight. (In fact, Fahreus mentioned that he’d have loved to have called the original Crusader Kings by the more accurate title Game Of Thrones, had it not been taken.) 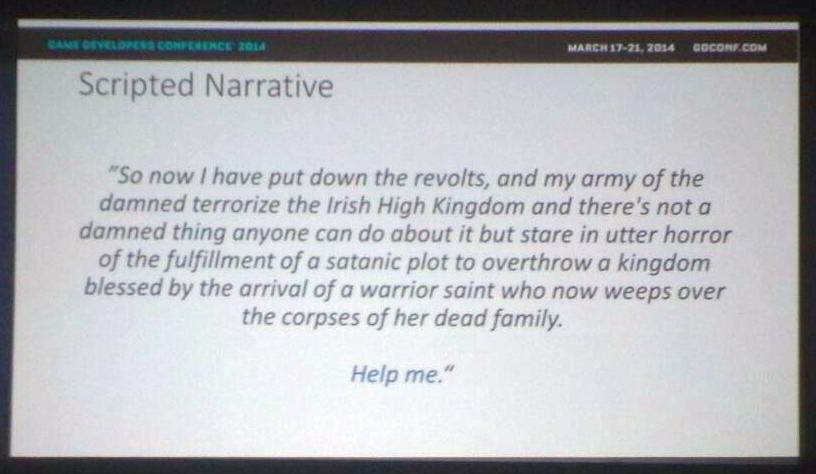 But the talk really started to become interesting as Fahraeus began to describe why emergent narrative was a good thing for games. He framed his entire argument in terms of “replayability.” where the other forms of narrative were limited in some way, but good emergent narrative “…could allow for even single-player games that you can play over and over again for a very long time.” But other than admitting that even linear games could be replayable, he showed no real inclination to examine that concept.

The idea of replayability is that the newness of a part of a game that may have been missed makes it worth playing again, but that’s not the case with Crusader Kings 2. There are some “new” aspects to the emergent narrative its campaigns possess, particularly the demonic possession and Joan of Arc stories referenced in the quote I started with, but that’s rarely what makes them worth playing. What makes a Crusader Kings 2 campaign worth playing is that the game systems combine to create a narrative that is hilarious, with a bumbling plotter attempting an assassination, or infuriating, as short-sighted nobles start a civil war in the midst of a Mongol invasion, but it’s almost always engaging. It’s great to play CK2 in the moment, and tell stories about what happened in the last game, far more than it is to think of what might happen in a future game. It’s simply playable, a far more impressive achievement than being “replayable.”

Yet even with my qualms about the motivating concept that Fahraeus used, it was still useful in that it pushed him and his team at Paradox to create a great game. In his examples, he got into the details of how the various systems interacted: a scripted event like a zealous king having the opportunity to pray for his sick son, the random dice roll causes the son to live, the game systems and a random roll causing the much older king to die two days later, and suddenly, the player had a story of a religious king who had prayed to God to take him in place of his grandson, and had those prayers granted. 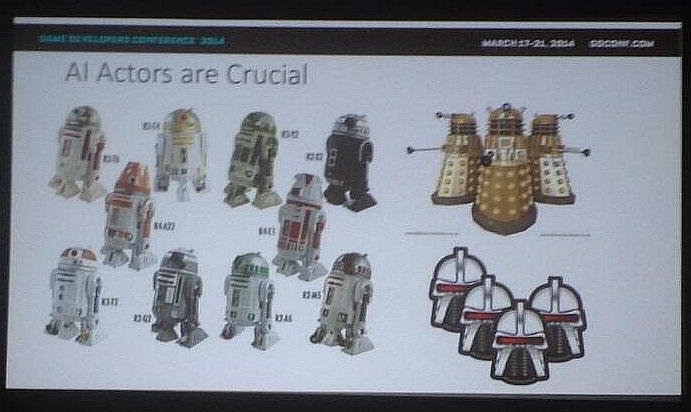 While explaining this, Fahraeus hit upon the key point of the matter: “We can capitalize on that human tendency to project meaning where there is none.” It’s about creating the space where players-or really, the audience for any story-can see or hear what makes the most and best sense for them. I think strategy games are especially well-suited for this, as their transparent mechanics (the math behind every relationship in Crusader Kings 2 can clearly be seen so you know exactly why your sister hates you) eliminate walls between player and game.

The focus on storytelling has had another pleasant side effect that Fahraeus noted: the Crusader Kings 2 forums on the official Paradox site have a much higher ratio of women participating than the forums for their other games. He described this as “…very satisfying, especially for such a misogynist era.” In doing so, he helped tie the presentation to the themes of gender which have been woven throughout this year’s GDC. Crusader Kings 2 didn’t just cross over from the niche strategy gaming world to the mainstream, but also from male-dominated spheres into less gender-segregated communities. A game like Crusader Kings 2, with fantastic emergent narrative, as it turns out, can be great for sales, great for critics, great for fans, and even great for equality.