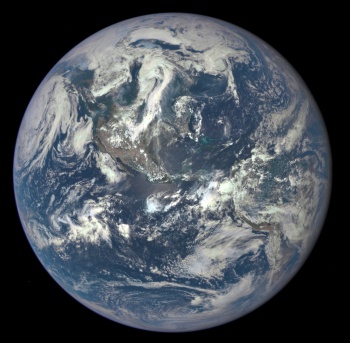 It’s great that NASA is finding Earth-like planets such as Kepler-452b, but scientists suspect many more exist in our galaxy alone.

Yesterday was a very exciting day for space devotees after NASA revealed the existence of Kepler-452b. Despite being 60 percent larger than our world, Kepler-452b is basically an “older, bigger cousin to Earth” that holds intriguing prospects for alien life. But if NASA scientists are right, Kepler isn’t alone: according to researcher Natalie Batalha it’s highly probable that a billion “Earths” exist in our galaxy alone. And that’s a conservative estimate.

“[Previous estimates] suggest that 15-25% of stars host potentially habitable planets,” Batalha explained. “So how does that translate to the number of planets in the galaxy? M, K, and G dwarfs comprise about 90% of the stars in the galaxy. Conservatively speaking, if 15% of stars have a planet between 1 and 1.6 times the size of Earth in the Habitable Zone, then you’d expect 15% of 90% of 100 billion stars to have such planets. That’s 14 billion potentially habitable worlds.”

We can go a step further and focus entirely on G-type stars like our own sun. If we’re looking at our solar neighborhood of 33 light years, 20 out of 357 stars are G-type. Based on Batalha’s math, that means roughly a billion “Earths” in the galaxy have yellow suns like ours (although that’s technically just a trick of Earth’s atmosphere).

Now to be clear, even if we’re being modest and stick with that one billion figure, it doesn’t mean colonists can settle on them. Venus is technically a “habitable” planet by these standards, and in case you weren’t aware, it’s not a pleasant place for anyone who likes breathing. And we can only make educated guesses about worlds like Kepler-452b, especially since its increased size might have incompatible gravity.

That being said, each discovered world still offers a wealth of unique knowledge, and might even have life forms of their own. Kepler-452b has been in its habitable zone for 6 billion years, longer than the age of our Sun. Who knows what secrets these billions of worlds might offer, even if they’re not the most ideal vacation destinations?

Until we know for sure, feel free to check out the images NASA has released on Kepler-452 while we dream of possibilities.

Pixels – An Affront to Videogames and Gamers