If you know my work, then you know I’ve clocked a few hours playing online games of the massive variety. Yet in the last three weeks, I’ve spent more time playing with other people than I’ve spent in all of those other games combined.

Online games have been trying to get players to group up for years. Players generally don’t want to group, because it takes time away from playing. You have to hunt around for internet strangers who are the right level, the right classes, in the right area, and interested in doing the same thing. If someone needs to have a bio break, then everyone in the group needs to stop playing until the group is ready again. When your healer is not doing his job and getting people killed, do you stop and teach him how to play, kick him and sit around doing nothing while you look for a replacement, or charge forward and just put up with it?

(Nitpick shield: No need to shout, “WHAT ABOUT RAIDS?!?” at me in the comments. We’re talking about the open-world questing here, which is the “main” part of the game for most players. Remember that not all games are WoW, and not all players are at the level cap.)

The grouping stuff is mostly an annoying time-sink, and none of that it is really “playing the game” in a mechanical sense. It’s busywork you have to do in order to get to the game. Grouping up is to playing as arguing over restaurants is to eating. World of Warcraft made great strides in taking these tedious tasks and streamlining them. The WoW dungeon finder is probably the biggest single improvement to group play in years. But it wasn’t until I played Guild Wars 2 that I saw what could happen if someone threw the entire system out the window and started over with the assumption that players should play together by default.

The problem with those old games is that the quests and dungeons forced you into groups, but the gameplay mechanics pushed you apart. If you group with other players, you have to share loot with them. If you’re in a group, you get less XP per kill, even if you happen to be doing all the work at the moment. If I’m in a group and I help a friend do a quest that I’ve already done, I get less reward than if I just ran around killing stuff on my own. The game is discouraging me from playing with my own friend! 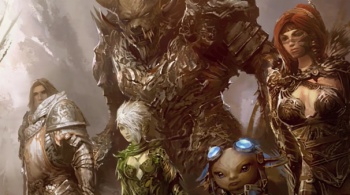 The problem is even worse if you’re in the open world, questing alone. If you see someone fighting a monster, then according to the game they “own” that monster. There is no incentive for you to jump in and offer help, because you’re spending your time and risking your neck for nothing. You won’t get any loot or XP. You might do so out of a sense of altruism, but the game mechanics themselves are telling you “helping people is worthless”. If you see a gathering node in the world where you can collect plants or mine ore, you have to rush to it before the other players or they’ll take it from you. The game is telling you “other people are your rivals”.

Don’t help. Don’t work together. Grab things before the other guy. These are called “massively multiplayer” worlds? Sure, there are a lot of people around, but they don’t play together on a massive scale. It’s like the old coin-operated arcades. Those people weren’t playing with each other, they were just playing near each other. Online games reward pragmatism, selfishness, and minding your own business.

Guild Wars 2 changed a couple of assumptions about how this ought to work, and the result is a game with a radically different feel. If you hit a monster, you get full XP for it, even if someone else also hit it. Even if a lot of people hit it. This means the game encourages you to jump in and help other people, even if they aren’t in your group. The fight is easier and you both get rewarded as if you’d done it alone. (Including your own chance at loot, unaffected by what the other person might get.) You get XP for reviving fallen players. If you help someone fight their way to a really valuable chest or resource node, you can both loot it. The game mechanics are telling you, “Other people are your allies and you should work with them”.

This results in a very different play experience. Players tend to travel around together, stomping on monsters and keeping each other alive. The crowd grows and shrinks as players move through the area or dogpile on an elite boss. I can’t tell you how many times I’ve wound up crisscrossing the same dungeon not because a quest told me to, but because I kept encountering new groups of players and running in a pack is fun.

You don’t have to stop and form a party, pick a leader, assign loot distribution, and agree on a goal. You just run with people who happen to be going your way. I’ve spent almost half my time with the game in these informal groups. Essentially, everyone in the world is already a member of your party.

World of Warcraft, Lord of the Rings Online, Champions Online, DC Universe Online, and all the others worked so hard to make me play with others with forced-grouping quests, and it rarely worked. I either skipped the quest or stubbornly did it solo. Guild Wars 2 has turned me into a team player without forcing anything on me. Some of the groups I’ve been in have been truly massive.

Guild Wars 2 is massively multiplayer, in the sense that you are actually playing with all these other people, not just running past them and hoping they don’t get in your way.

Shamus Young writes books and software when he’s not playing Guild Wars 2, which is never.