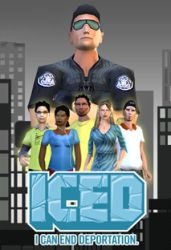 International human rights organization Breakthrough has launched a new videogame called ICED (I Can End Deportation) designed to shine a spotlight on what it calls unfair U.S. immigration policies.

The free downloadable game puts players in the role of an immigrant youth being chased by Immigration and Customs Enforcement officers. During the course of the game, players must make moral choices and answer fact-or-fiction questions about current immigration policies in the U.S. Incorrect choices increase the chance of the player being placed in detention, separated from his family and forced to endure “unjust conditions” while awaiting the random outcome of his case.

“Breakthrough believes it’s important to engage young people in social issues and encourage civic engagement,” said Mallika Dutt, executive director at Breakthrough. “Games for change help people to better relate to an issue because they can put themselves into the shoes of a character experiencing injustice.”

“Close to two million people have been deported and thousands more affected – many without just cause – due to unfair immigration policies,” she added. “When we let the government deny due process and human rights for some people, we’re putting all of our freedoms at risk.”

The freely downloadable game is targeted toward students, and will be accompanied by material for use in social studies and civics discussions in high schools and community groups. Each of the game’s five characters is based on true case studies, and represents different parts of the world with different immigration statuses.

“ICED was designed to show people in an interactive, firsthand experience what is happening today to thousands of people on a daily basis,” said game designer Heidi Boisvert. “We hope through awareness of these human rights violations, the public will take action and work toward righting this wrong.”

ICED, a 74 MB download, is available from www.icedgame.com, while more information about Breakthrough’s mission can be found at www.breakthrough.tv.

GDC 2008: Jamil Moledina: Probing the Mind of GDC, Part One