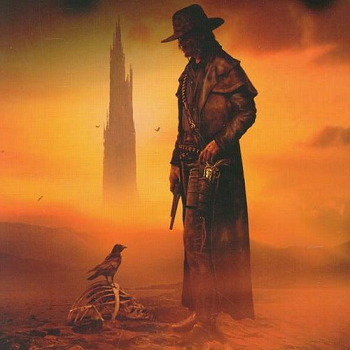 With both the main roles locked up, a big screen adaptation of King’s most popular series is finally set to begin production.

It’s been a twisting, turning, unforgiving road for the movie adaptation of Stephen King’s The Dark Tower, but at long last, it appears that the project will finally see the light of day.

Yesterday, the master of terror himself took to Twitter to drop the huge news, writing “It’s official: The man in black fled across the desert and the gunslinger followed. #DarkTowerMovie” Not only that, but King also confirmed that both Idris Elba and Matthew McConaughey had been locked in as Roland Deschain and Randall Flagg, respectively.

Speaking with Coming Soon alongside Dark Tower director and co-writer Nikolaj Arcel, the legendary author also dropped some huge spoilers about where and when the film would take place.

“(The movie) starts in media res, in the middle of the story instead of at the beginning,” King says. “Which may upset some of the fans a little bit, but they’ll get behind it, because it is the story.”

“A lot of it takes place in our day, in the modern world,” added Arcel.

Arcel went on to praise both Elba and McConaughey, saying that the latter is “an incredible actor who can do anything.” When it came to the portrayal of the iconic gunslinger Roland Deschain, Arcel and Elba seem to be in agreement about how the character would be brought to life on the big screen.

“For me, it just clicked. He’s such a formidable man,” said Arcel. “I had to go to Idris and tell him my vision for the entire journey with Roland and the ka-tet. We discussed, who is this character? What’s he about? What’s his quest? What’s his psychology? We tried to figure out if we saw the same guy. And we absolutely had all the same ideas and thoughts. He had a unique vision for who Roland would be.”