This year saw the return of the infamous E3 booth babe. I’m told it wasn’t a full blown return to scantily clad form, but I was glad to see the ESA finally realized the crucial role they play in making sure that hundreds of aspiring actresses are able to pay the bills for the month of June. In previous years booth babes had become something of a endangered species, their frivolous thrills pushed aside in favor of things like business and maturity. With that one decision the world of gaming trade shows became a cold and gray place, kinda like that town in the movie Pleasantville. Thankfully, 2009 was the Technicolor reintroduction of E3, the booth babe and the acknowledgment of the important role enthusiast gamers play in the industry.

What’s interesting is that the return of booth babes also marks both a concession on behalf of the industry and a new found comfort with its cultural standing. When booth babes were banned from E3 in 2006, it came as a result of an industry at a crossroads: The DS was on fire, the Wii debuted and Guitar Hero was on the path to mainstream cultural acceptance. The 14 year old boy dreamland that defined the E3’s of years past was a relic, and the booth babes that fleshed out that fantasy, collateral damage as the game industry embarked on its mission to remake itself for a more mainstream audience.

Three years later and mission accomplished. The casual console gamer revolution arrived, and videogames have started their march out of the bedrooms of 14 year old boys and into the living room. But, as everyone knows, the broadening of the videogame market has not been a collective step forwards. Enthusiast gamers still love their first person shooters and casual gamers are still enthralled with the novelty of peripherals. To that end, the videogame industry seems to have realized that half nude women who may or may not slightly resemble videogame characters are still a very important part of both the videogame and tradeshow culture.

Fantasy and aspiration are what define videogames for a large segment of their audience and E3 plays directly into those desires. Sure it’s a trade show, but E3 has never been CES. E3 is about themed booths and interactive Zelda Koi ponds. It’s also about selling a vision that’s usually only partially finished when people see it at E3. Booth babes help accomplish both of those ends. They are both the fantasy brought to life and an added attraction that sweetens the deal on a game that might otherwise not have a whole lot to show for itself just yet.

Booth babes are also the missing link in videogames, sex. Because as great as games are at implying certain experiences, there definitely aren’t very many sexy games. Booth babes compensate for that almost universal flaw in the preview process, so that regardless of what a game is actually about, at least some sex appeal can be associated with it. Videogames tend to feature an overwhelming amount of men with a few token videogame girls thrown in for good measure. If accuracy was a concern, the booths would be populated by male models and those mascot suits used to represent cartoon characters. Booth babes also allow companies to compensate for the fact that most of them still don’t know how to represent women in videogames. So they give the fans a model who is both real and probably has more personality, even with her scripted lines, than characters in the game can muster. 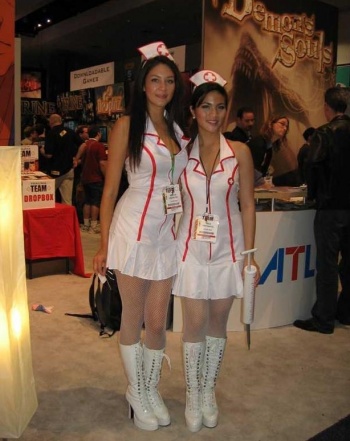 On a personal level, I love booth babes both for the cognitive dissonance they provide and the sheer awkwardness they add to a show. It’s confusing at first, seeing scantily clad women run around, and for a minute something deep in my brain thinks that the sexy videogame character has come to life. Then the cynic in me comes to the fore and I think with some disdain about how none of these women probably play videogames and they’re just doing it for the paycheck. But in the end, like going to the Hooter’s restaurant where all the waitresses are incredibly friendly, I ultimately don’t care and allow myself to buy into the blatantly obvious falsehoods. In an E3 forum topic the other week, a user predicted more awkward interactions between fanboys and booth babes. That’s the other part of the Booth Babe experience I find so compelling: watching people respectfully and even reverently track these women down to get their pictures taken with them. The fans, deep in their own fantasy, don’t even smile in many of these photos because smiling would somehow acknowledge the falsity underlying the whole transaction. Booth babes are no joke for the fans.

All of which is to say that booth babes are part of who we are as gamers. To get rid of booth babes or deride them as some sort of pathetic enterprise for sad sacks is to turn a blind eye to the masculine culture of pinup girls that has long had a place in every industry that attracts men. Women on the side of fighter planes, girls sprawled out on cars, hell, even cheerleaders are all part of a storied tradition of advertising and selling ideas that have little in common with the female form.

This brings me back to the return of the E3 booth babe. Wii Sports Resort and the racing game Dirt 2 are aimed at two totally different audiences and never, the ESA seems to have realized, the two shall meet. If Codemasters needs to use a porn star to advertise their racing game at E3 why stop them? I think the industry is also more comfortable with its cultural standing now than it was three years ago. The Wii found its way into the White House, and the fervor surrounding violent videogames was repeatedly drowned out by the roar of ever increasing sales over the past three years. Granted, the return of the booth babe signifies a larger coming schism between casual and enthusiast gamers that has yet to be fully addressed by the industry. But for the moment E3 thrives on the spectacle, on fantasies made real for a few days, and with the dreams of an ecumenical trade show dashed upon floor of a particularly dull airplane hanger at last year’s E3, I think the Booth Babe is finally here to stay.

Tom Endo thinks booth babes are awesome, if not quite as awesome as booth Fabio.