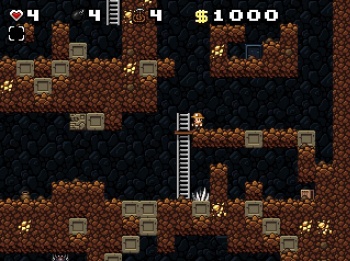 Indie “roguelike” platformer Spelunky (described by one Escapist editor as “this year’s Braid) is finally out of beta – and will be making its way to the Xbox Live Arcade.

Spelunky is kind of what you’d get if you took Indiana Jones, made him a cute super-deformed figure, and sent him to explore a cave with a brutal number of traps lurking around every corner. It’s procedurally generated, which means that the cave is different every time you play, and in the spirit of old Roguelikes, the moment you die, you start all over again.

Perhaps not everybody’s cup of tea, but for those who do like that sort of thing? It’s apparently sort of awesome – Escapist editor Jordan Deam has reportedly spent over 50 hours (and 500 deaths) playing the game since late June.

The game’s long beta has ended with the release of version 1.0 – pick it up for free if you’d like – and creator Derek Yu has announced that the game will be ported to XBLA in 2010. It won’t be a straight port, either, according to Yu, and will be stuffed “with new graphics, audio, and other features for XBLA users.”

This sort of game seems absolutely perfect for a global leaderboard scenario, so I can only imagine that’ll be one of the options. And maybe an Easy-Mode too, Derek? …please?