Welcome to Day Three of The Escapist‘s Indie Developer Showcase, a 10-day celebration of the designers and programmers who have struck out on their own to make the games they want to make. Each day we’ll feature a new game or demo by an up-and-coming indie developer along with a brief interview. Some games are already commercially available, some are works in progress, but all are free to play. To see who’s on the schedule or check out what you’ve missed, click here. Enjoy!

Robin Lacey and Damien Cerri started Beatnik Games over a year ago. Now, they’re a team of five: Lacey, Cerri, Lawrence Bishop, Alex Ashby and John Godwin. Their first project is the competitive multiplayer ninja-robot gibfest Plain Sight, which is now entering open beta. We spoke with Lacey, the game’s producer, about Plain Sight and indie game development in general. 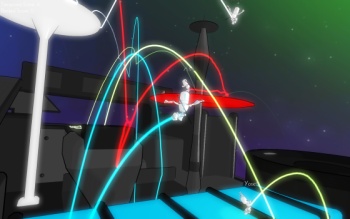 “In an obnoxious and inflammatory nutshell: Plain Sight is a blend of The Weakest Link and suicide bombing. It has robots, swords, crazy gravity and a certain air of cheerful malice.”

“You start the game as a robot on a little planetoid. You have one point. One point is rubbish. To get more, you must find and destroy other robots to steal their points from them. Finding them is the easy part; every robot glows brightly and lights up the world around them. Once found, the killing may not be quite so simple.

“Once you’ve gained a few points, you may get slightly nervous that, at any moment, someone will swoop in and steal them from you! In order to stop this from happening, you can bank your points by blowing yourself up. Any robots you take out in the explosion will act as multipliers for your final score. Respawn and repeat.”

On the strengths and weaknesses of working with a small team:

“I love doing everything myself, that’s the bit I like the most about working in a small studio. Everyone here has a job to do and, as there is no delegation of responsibility, there is very little room for error. This makes it pretty stressful and life consuming – but who needs a life when you get to make videogames?

“Alex, who has worked at much larger companies like EA, says that the job pressures for him are pretty much identical, but the biggest difference is that, here, his and everyone else’s opinions actually matter and can change the course of the project. There is no sense whatsoever of being a tiny cog in a huge machine.”

On the worst jobs they’ve taken to support their game development ambitions:

“At some point all of us have had to put the dream on hold. Alex had to test games for the N-Gage, John worked as a delivery boy for Pizza Hut, Lawrence made “e-learning software” and I worked in a surveyors’ firm.”

“I thought my time flogging houses was pretty bad, but playing the N-Gage puts that into perspective. That’s just inhumane.”

On knowing when a project is finished:

“This is a slightly tricky one because, of course, Plain Sight isn’t finished yet. But I can tell you now that the honest answer to this is simple: It’s just before you run out of money. There comes a point when you can’t eat or make rent, and when you see that date rushing towards you, all other priorities become unimportant and you start winding things down.

“The key is to always have a playable version of your game with as many of the core features as possible. While you have time and money, you can keep adding to and refining your game. But at a moment’s notice, you want to be able to say “stop, we’ve done all we can, this is it.” For us, the big limiting factor is money and we have to sculpt our passions around our bank balance.”

On the effects of the recession on the games industry:

“Everyone has been quick to claim that the video game industry is recession proof. Personally, I don’t agree. I don’t want to write an essay on the subject but the general consensus is that more banks are going to get jittery and pull the plug on highly geared and unprofitable studios. This has already happened and I think we’ll see more of it.

“It’s not the end of the world, but times are going to be tough. Over the next year or so, it’s going to be very tempting for the big publishers/developers to be risk averse and only hammer out money-spinning IPs. Given that we were just starting to get out of that rut (EA’s 2008 publishing lineup was particularly encouraging) it would be a real shame for the market to become saturated with crap.