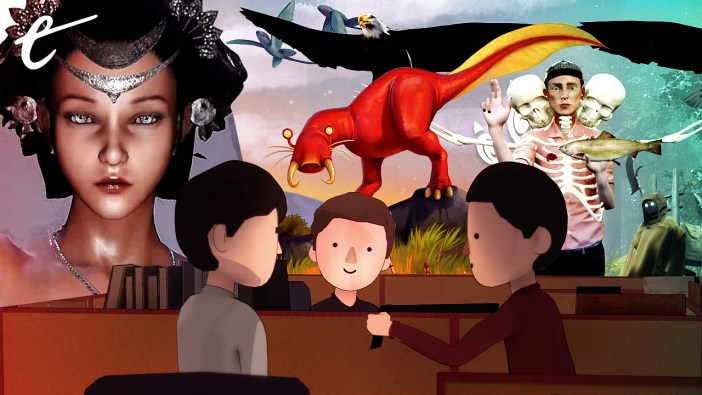 Welcome back to another week’s worth of indie game goodness to keep on your radar. Even though there are several promising titles set to hit before we put a bow on 2022, we’ve cast our net further out this time and pulled in everything from a cozy puzzler set for the start of next year to an ethereal journey game with no firm release date. With no further ado, let’s take a quick look at the indie games Graveless, Adapt, Unwording, We Kill Monsters, and The Forest Cathedral.

It’s hard to look past a game with as compelling character and monster design as Graveless. This dark fantasy ARPG is the new IP from Digital Happiness, an Indonesian studio that has spent the last 10 years building the Dread Universe. That franchise started with the Fatal Frame-like DreadOut, before branching into comics, a movie, and multiple games including the upcoming asymmetrical multiplayer game, DreadHaunt.

As a hack-and-slash dungeon crawler, Graveless is a significant shift away from the team’s safe zone. Talking about the process of embarking on this new journey, the game’s producer Rachmad Imron said, “Doing new IP for us as a bootstrapped company is quite challenging and nerve-wracking because, well, our budget and resources are very limited. In Digital Happiness we’re doing a lot of prototypes of new IPs, one of them is Graveless… So Graveless becomes our weekend project while the full team is developing DreadHaunt.”

Graveless also catches the eye thanks to what appears to be deep RPG elements, with magic, melee, gunplay, and acrobatic traversal all well represented in the debut trailer. According to Imron, it’s been about a year since that footage was captured. The project has since been moved to Unreal Engine 5, but the team wanted to get word out already to gauge interest, as well as “to connect with players as soon as possible, gathering input, critics, and responses.” Hopefully getting feedback early proves to be a gateway to ensuring Graveless can stand amongst the titans of the ARPG genre.

Adapt may just be the closest thing to a Spore competitor we’ve ever seen. However, far from trying to emulate Maxis’ eons-spanning gameplay, Adapt deftly snips out the “Creature” component and builds it into a whole game that is heavily reliant on procedural generation. Your challenge in Adapt is survival. Nothing more, nothing less.

But if you think you know what survival means in the context of video games, think again. Solo developer Paul Hervé has taken inspiration from the biological meaning of the word to build a game that puts evolution at the forefront of the gameplay. That means you’ll spend your time bolting together a Frankensteinian creature from an array of different parts that will enable it to survive in often hostile environments. Shells, sails, fangs, mandibles, spider legs, flippers: The only limit to the monstrosities you can create is your pool of evolution points (and the body parts you’ve unlocked up to that point).

The premise makes Adapt sound like a god game — and it is, but it’s also an adventure. Once you have a creature that can fend for itself, you take direct control and venture into the wide world to fight against other critters, find your own kind, grow up, and propagate your species. In the meantime, you have to keep in mind the environmental challenges to ensure you don’t slip to the bottom of the food chain or wither away in the shallow end of the gene pool. If you’re the kind of player who likes making your own fun, Adapt should be right up your alley with robust potential for emergent gameplay.

When I think of heartwarming games, Forgotten Fields by Frostwood Interactive tops my list. The studio’s next game, Unwording, is set to continue in the same vein. You’ll play as Tom, a man with a tendency towards pessimism, across three days that prove pivotal in shifting Tom’s perspective through happenstance.

The vibes are extremely cozy, and that’s something solo developer Armaan Sandhu actively tries to cultivate in his creations. “My goal with Frostwood has always been to create cinematic works that hopefully move, affect, and influence people emotionally,” he said. “I love juxtaposing the dark and light elements of life as that makes the good moments shine even brighter and have more of an impact when they do happen. At the same time, moments of melancholy and darkness have their own charm when shown in stories and enable catharsis by addressing dark and repressed emotions.”

While Forgotten Fields and Rainswept before it were strict narrative adventures, Unwording sees Sandhu stretching his talents with the addition of word puzzles. These puzzles help us understand how Tom sees the world, which Sandhu says formed the basis of the entire game: “I wanted to make something that shows how the words used by our inner monologue can affect how we see our day-to-day life, and that changing those words can create a noticeable difference in how we see the world around us. Even though mechanics-driven games are not really my forte (and are something I found quite challenging to design!), there was no other direction I could take this game.”

That title is a stark reminder of the value of simplicity. The goal of the game is clear. It’s right there on the box: We Kill Monsters. Yet that raises the question of how. In games, we slay our demons in dozens of ways, from jumping on their heads to slicing, stabbing, drowning, transmuting, and shooting. We Kill Monsters has a distinctly medieval flair to combat, with big swords, arrows, and throwable items seeming to be the order of the day.

But the game is shaping up to be much more interesting than just killing things. It’s frequently been cited with reference to Shadow of the Colossus and Death Stranding, and it’s easy to see where those comparisons come from. Most of the footage available so far (mostly via the Twitter feed of lead developer Jacob Williams aka Glass Revolver) is quite chilled out, showing a character traversing a land of gorgeous natural environments and mysterious ruins throughout the journey that sees them descending into a vast pit.

Despite the haunting visuals and lonesome vibe, We Kill Monsters is being designed for up to four player co-op, with a range of mechanics to emphasize the building of relationships, including camping and playing music. We’ve had many video game journeys over the years, from Myst to Journey to Death Stranding to Inside, and if We Kill Monsters turns out to be as ethereal and involving as it’s looking, there’s a solid chance it could be another standout of the genre.

In 1962, a book changed the world. Silent Spring by Rachel Carson was a landmark work of investigative science that argued the widespread use of pesticides would have deleterious long-term effects on the environment, ecosystems, and the effectiveness of the pesticides themselves. The book played a key role in the eventual DDT ban in the US and fundamentally changed environmental activism worldwide.

Now, 60 years on, solo developer Brian Wilson has taken that story as the inspiration for The Forest Cathedral. “I’m always looking to bring outside sources into my games,” said Wilson. “I initially learned about Rachel and Silent Spring in college and thought it was only going to be one aspect of The Forest Cathedral, but after researching, I realized there was so much there and that it needed to be its own game. The Forest Cathedral is a reimagining of the events inspired by Silent Spring, which allows me to tell my own sci-fi story. I get to shed light on some true events and scientific facts that are nested in immersive gameplay true to my world.”

The gameplay is split across two genres: a 3D walking sim and a 2D platformer, with the latter nested within the former. As you explore the island environment, you’ll come across computer terminals. “Players will essentially be platforming inside of the terminals but trying to achieve something different each time — keeping the game fresh with all the different orientations, perspectives, and locations the terminals are in,” Wilson explained. The Forest Cathedral has the potential to be engrossing, fun, and educational all at the same time, and even if it misses one of those marks, it’s guaranteed to be a fascinating mash-up of ideas.

Let us know what you think of the selection of indie games this time around and what you’re most interested in among Graveless, Adapt, Unwording, We Kill Monsters, and The Forest Cathedral.