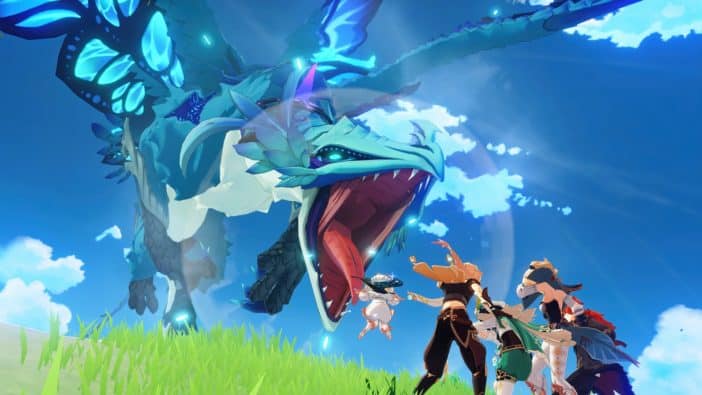 It’s taken the better part of four years, but we’re finally starting to see the influence of 2017’s The Legend of Zelda: Breath of the Wild permeate into other open-world adventures. Both the recently released Genshin Impact, which has had a remarkably successful launch, and Ubisoft’s upcoming Immortals Fenyx Rising (formerly known as Gods and Monsters) take their inspiration from the Nintendo Switch launch game and wear it as a badge of honor. And honestly, I don’t fault them whatsoever — when a game like BotW comes along that so expertly harnesses what we love about adventure, exploration, and world design, and then goes and moves the bar dramatically higher, it only makes sense to crib from it.

Let’s get this out of the way first — neither of these games are “rip-offs.” These aren’t cheap knockoffs that flood mobile stores like Medal of Duty, Super Dario Bros., and Fall Folks that try to capitalize on the success of other, better games. Instead, these two are simply the first in what will undoubtedly be a long line of games that realize that Nintendo reinvented the wheel, so they might as well use it.

In Genshin Impact, the bones of Breath of the Wild are evident right from the get-go. Once you gain control of your character on the sandy shores of a lake in this new world of Teyvat, the sensation of movement is immediately familiar to anyone who experienced Link’s latest adventure. That’s thanks to the same implementation of a circular stamina meter that slowly drains as you dash across the world and climb up any surface you come across. 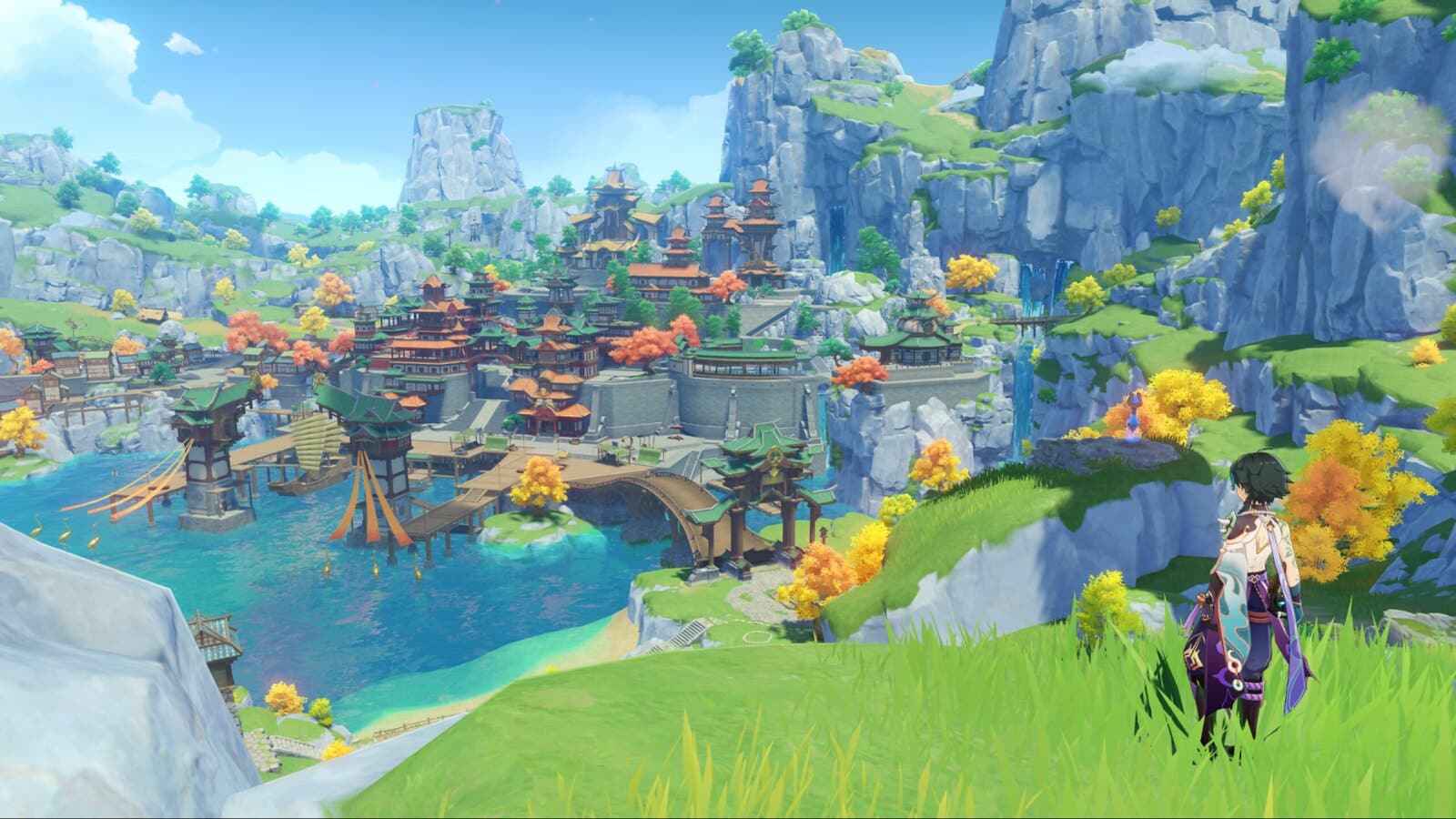 Stamina management became a meta-game within Breath of the Wild that players had to slowly master, knowing how to get the most out of each drop of energy, when it might be safe to stand still and let it refill a bit, and when to risk pushing it to the edge in hopes that a final leap might get you to safety. By the time you took down the four Divine Beasts, stamina management had become second nature, and it seems to be no different in Genshin Impact.

The use of climbing and stamina doesn’t just impact traversal in both games, but also how the world itself is constructed. Both games rely on deep viewing distances, simple and colorful geographic shapes to catch the eye, and plenty of high vantage points to both survey your possible destinations and provide the height needed to glide your way there. And yes, very early on in Genshin Impact, your player completes a quest called License to Glide, which gives you the ability to effortlessly sail through the air, including using up-drafts to continue floating. And while this feels remarkably similar to BotW, I’m fine with it because it works. It strips away the tedium of getting from point A to point B and instead makes travel a compelling part of the adventure.

Apart from mechanics, there are a lot more elements of Genshin Impact pulled straight from Breath of the Wild. Both games have enemy encampments peppered with conveniently placed exploding barrels and are populated by similar archetype monsters. Upon being spotted, they even share the same tiny yellow exclamation point above their heads to let you know that you’ve been spotted. Alongside this, Genshin’s Temples transport you to a combat and puzzle challenge that seems to exist in another realm, much like the Shrines scattered about Hyrule. 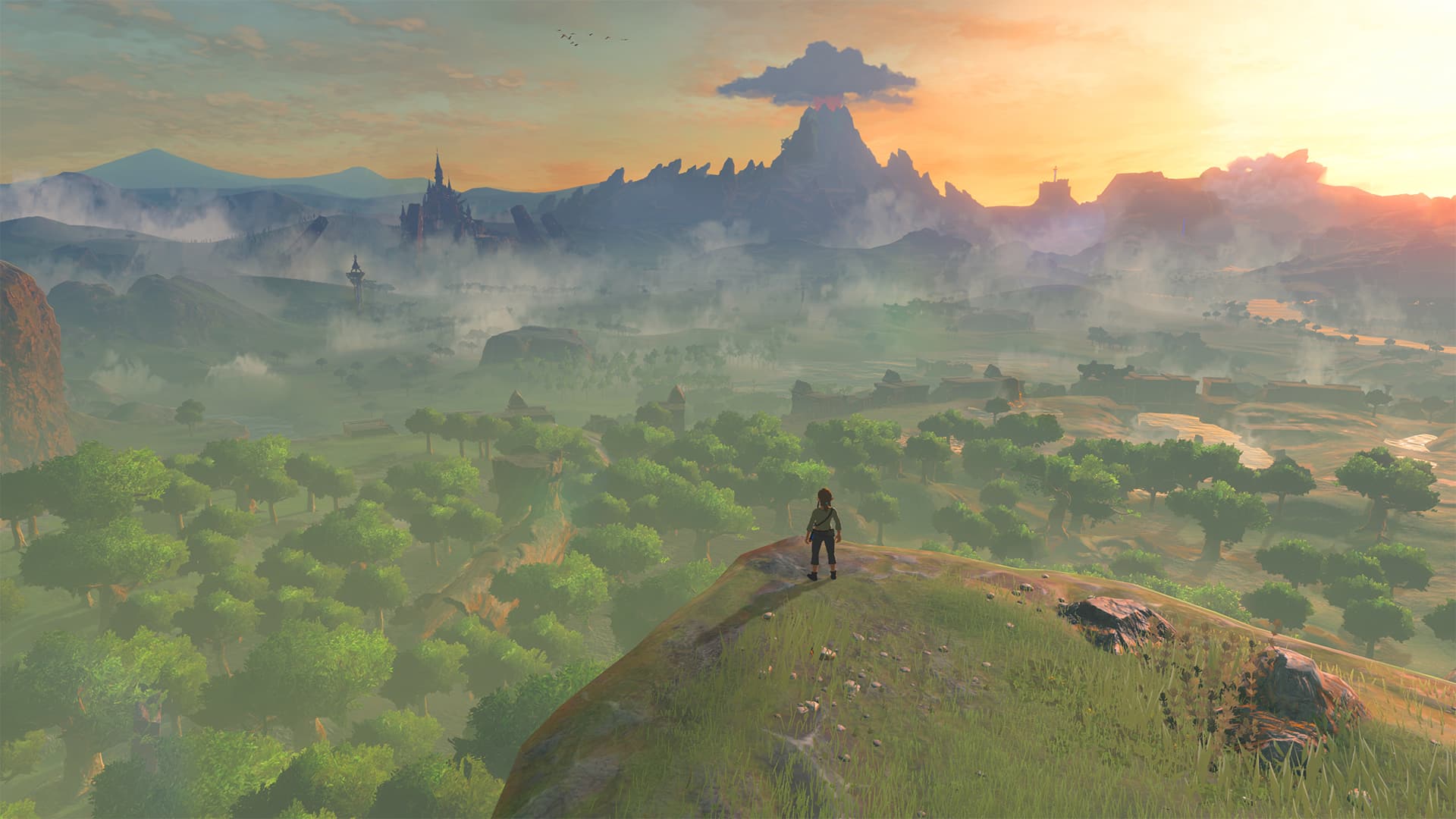 But in spite of all of these similarities to BotW, Genshin Impact stands on its own. It exudes its own brand of grandiose RPG spectacle, piles and piles of menus to navigate, deep elemental magic systems that play off one another, a large array of characters you can level up and swap between on the fly, and a fairly unobtrusive “gacha” monetization model. I’d even go so far as to say it takes some of the things that Zelda did and improves upon them, like being able to climb up surfaces in the rain without constantly sliding back down in a Sisyphean manner.

While it’s easy to analyze Zelda’s impact on Genshin Impact now that it’s available to download, it certainly won’t be the last 2020 game that borrows liberally from Breath of the Wild. Ubisoft’s recently re-revealed (and unfortunately renamed) Immortals Fenyx Rising seems to pull even more blatantly from the Switch staple.

Last month’s gameplay walkthrough showed how many adventures in Fenyx Rising will begin by climbing to the top of a high structure or mountain, surveying the landscape, marking points of interest, and then gliding down to them using your Wings of Daedalus, all while keeping an eye on your stamina meter. Once on the ground, you’ll gather ingredients for recipes, fight enemies, and explore the world in search of Rifts, which again act very similarly to Shrines. It seems like its core gameplay loop draws even more heavily from what Nintendo crafted in Breath of the Wild. 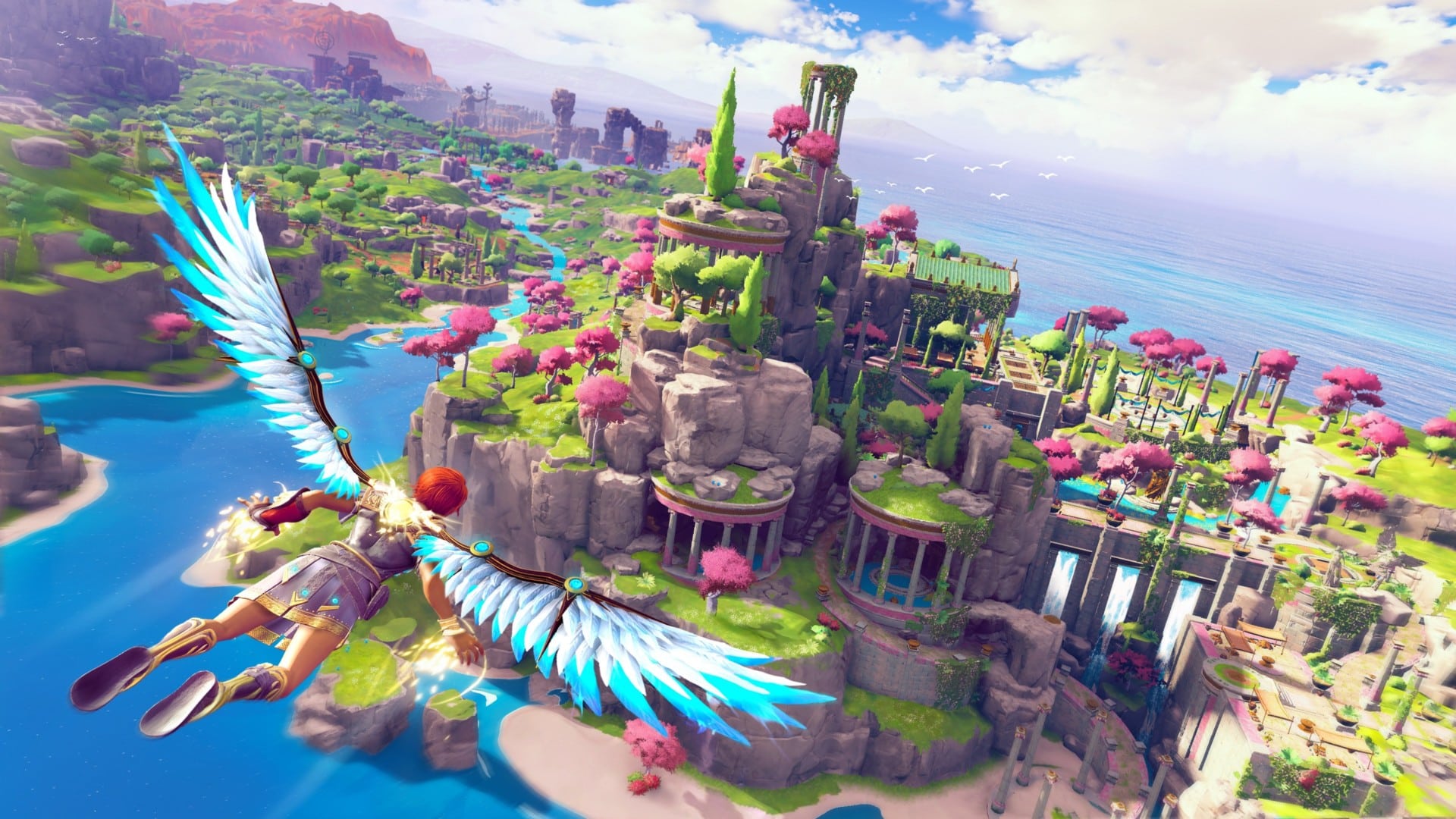 However, such cribbing has been commonplace in video games since the very beginning. Once a platformer like Super Mario Bros. came along, the entire way we created, played, and spoke about games changed. Same with seminal first-person shooters like Wolfenstein, Doom, Quake, GoldenEye, Half-Life, and Halo. Once a game illuminates that lightbulb in the heads of creators, it’s impossible to go back. Grand Theft Auto III did it on PlayStation 2, and then a generation later, Ubisoft did it with Assassin’s Creed. Those games weren’t just singular experiences, but rather blueprints that genres and games themselves would be constructed from going forward.

But sometimes ideas come along that should be stolen by everybody under the sun and yet aren’t. A recent example that comes to mind is what Monolith created in Shadow of Mordor and Shadow of War with the Nemesis System, which I’m still shocked hasn’t been cribbed by a dozen different games by now. Here’s to hoping that WB Games is incorporating it into some of its upcoming games, like Gotham Knights, Suicide Squad, and Hogwarts Legacy.

And so, while we wait for Nintendo to deliver us a true successor to Breath of the Wild at some point in the coming years, I’m thrilled that games like Genshin Impact and Immortals Fenyx Rising are delivering experiences that feel inspired by the 2017 masterpiece. And who knows? Perhaps some element of them will be so remarkable that designers at Nintendo will feel sparked by its creativity, ensuring that the circle remains unbroken.