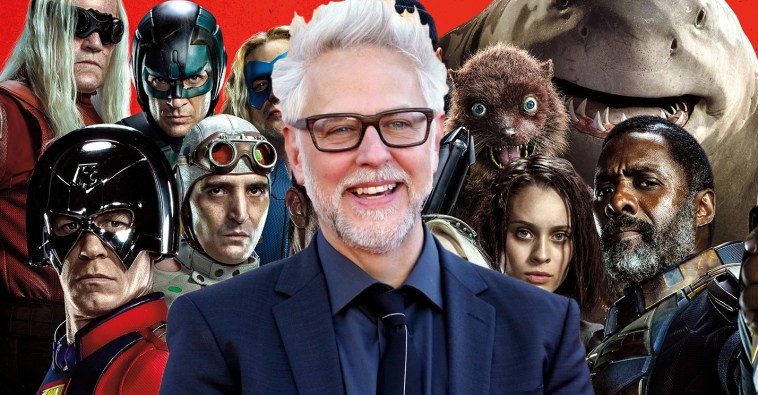 It turns out the reveal of the Guardians of the Galaxy Holiday Special trailer is not the biggest James Gunn news of the day. Per THR, James Gunn and Peter Safran are the new co-chairs and co-CEOs of DC Studios, leading DC movies, TV, and animation and reporting directly to Warner Bros. Discovery CEO David Zaslav. DC Studios is a new division of Warner Bros. that will replace DC Films, which had been led by Walter Hamada until his departure last week.

James Gunn, whose superhero credits include the Guardians of the Galaxy film franchise for Marvel and The Suicide Squad and Peacemaker for DC, will focus on the creative end at DC Studios. Meanwhile, Peter Safran, whose credits as a producer are myriad on projects like Aquaman and The Suicide Squad, will focus on business and production. They will work collaboratively with Warner heads Michael De Luca and Pamela Abdy to craft new DC projects, and Gunn will be exclusive to DC for this deal that reportedly runs for four years. (Gunn’s final project with Marvel for the foreseeable future will be Guardians of the Galaxy Vol. 3.) The idea is that this group will be the executives who maintain a vision for the vast DC universe on film and TV screens.

James Gunn and Peter Safran offered a statement about becoming the new co-CEOs of DC Studios:

We’re honored to be the stewards of these DC characters we’ve loved since we were children. We look forward to collaborating with the most talented writers, directors, and actors in the world to create an integrated, multilayered universe that still allows for the individual expression of the artists involved. Our commitment to Superman, Batman, Wonder Woman, Aquaman, Harley Quinn, and the rest of the DC stable of characters is only equaled by our commitment to the wonder of human possibility these characters represent. We’re excited to invigorate the theatrical experience around the world as we tell some of the biggest, most beautiful, and grandest stories ever told.

Any DC project that has not been announced yet will fall under the purview of Gunn and Safran, but they will not be directly involved with the Joker sequel and it’s uncertain what role they will have in Matt Reeves’ Batman universe.