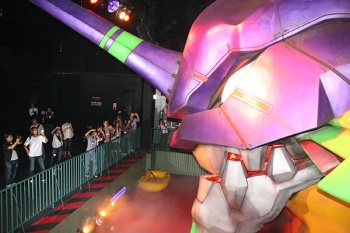 Japan’s latest giant robot project is complete, and it is only a matter of time before it devours us all and ushers in the apocalypse – but you mustn’t run away.

I think the record will show that generally, I’m a pretty big fan of Japan’s new-found obsession with building real-life versions of its fictional giant robots, but this? This is different.

Work has completed on the giant full-scale bust of the titular robot from influential mid-90s mecha anime Neon Genesis Evangelion. The “Evangelion World” site, located at the base of Mt. Fuji, was originally announced in May and opened a week ahead of schedule. While not a full model of EVA-01 – what with the Evangelion units being much, much bigger than the other mecha Japan has already built – the bust aims to recreate the iconic scene where protagonist Shinji Ikari first encounters the weapon of war.

Fans can visit the statue, take a picture inside a life-sized Entry Plug, or hang out with a statue of the incredibly creepy Kaworu Nagisa – that is, they can do all of that while they’re waiting for EVA-01 to go berserk and devour us all.

According to Ngee Khiong, the bust and its housing occupy 1,460 square meters and cost ~150 million yen ($1.73m USD) to build. I think we can all agree that this is a small price to pay in order to bring about the eventual collapse of the whole of human consciousness into one giant primordial sea of existence, can’t we?

And if not, well you can always take pictures with women paid to dress up as bizarrely sexualized 14-year-old girls. Since that is, after all, what Evangelion is all about.