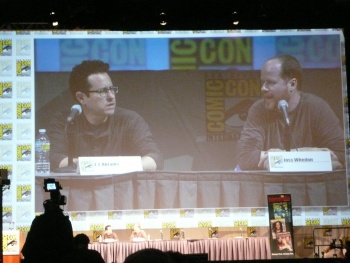 His career has had many ups and downs, but Whedon clearly holds a grudge about more than a few of his failures.

Watching the panel at Comic Con 2010, it was clear that Joss Whedon still has as sore spot for how his scifi western show, Firefly, was treated by Fox. Dollhouse fared a bit better but Whedon was also sensitive about its cancellation. Compared with the cool confidence that J. J. Abrams exuded, Whedon’s nervous jokes were more entertaining, but also displayed a bitterness. That being said, Whedon does not appear to be depressed or discouraged by these events and will continue to fight to create the stories that he loves.

Whedon didn’t mention Firefly by name, but he did make one huge dig at how his show was handled. When asked whether he preferred film or TV he said, “What you can do in a movie, what you can accomplish is so extraordinary and so fulfilling. And you get to be done, which is a huge relief. Being able to tell a story over 7 years or even, you know, 15 episodes, 11 of which they air out of order is just so-“

Here Whedon was drowned out by the surge of cheers from the crowd in protest to what Fox did to his show (not airing the pilot first making the plot hard to follow, etc.). Whedon was also asked point-blank about the cancellation of Dollhouse, which aired on Fox for 1.5 season before being cancelled in November 2009:

“My experiences at Fox have not been successful,” he said. “Ultimately it’s because there is a certain amount of incompatibility that is very easy to miss. I like genre stuff, and that’s what they wanted. You mention sexy and they want that but you can’t actually mention sex. I have more of a cable mentality than I realized. I had been away from television for a while. I didn’t know how much things have changed. I didn’t look at Janet Jackson’s nipple and I didn’t know how much trouble it caused. What I learned was know your audience and your first audience is the people who are paying you to make [the show].

“Which is why, right now, I’m at Marvel and I’m extremely happy. It’s a very different experience.”

Whedon also wrote the script for Alien Resurrection, which is maligned by fans and studios alike. When he was asked if he kept any props or memorabilia from his movies, he quipped, “I have an Alien egg but I had to bury the franchise in order to get it.”

I had to laugh at that one myself. The fact that Whedon is able to laugh at his failures is a good thing. You have to have a thick skin in Holywood and Whedon certainly showed that at the panel by making light of heavy things.

Now, he better not screw up The Avengers or he may just snap.