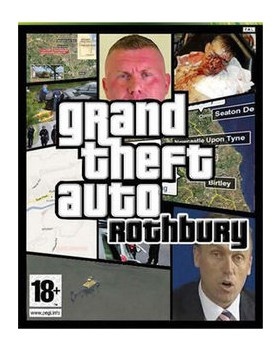 The “journalist” who made-up the story about Grand Theft Auto Rothbury in yesterday’s Daily Star says he’s “baffled” by the uproar and has responded to complaints by ridiculing adult gamers.

A quick update in case you missed it yesterday: Jerry Lawton, a “journalist” with the U.K. news site Daily Star, wrote a story about a new version of Grand Theft Auto based on real-life killer Raoul Moat. He even extracted an obviously anguished quote about GTA Rothbury from the grandmother of Moat’s ex-girlfriend, one of his victims. The problem? There is no such game. Lawton found a fake cover of the non-existent game online and proceeded to build an anti-gaming story around it.

The uproar eventually led to the story being pulled, albeit without any kind of apology, explanation or even an acknowledgment that it existed at all, but the man behind it is entirely unrepentant. In fact, he claims to be surprised that people are upset by his story and seems oblivious to the fact that Grand Theft Auto Rothbury doesn’t actually exist at all. He even took the opportunity to ridicule adult gamers on his Facebook page, which has since been set to private.

“Baffled by the fury of adult gamers,” he wrote. “These are grown (?!?) men who sit around all day playing computer games with one another who’ve today chosen to enter the real world just long enough to complain about my story slamming a Raoul Moat version of Grand Theft Auto! You would think I’d denied the Holocaust!!! Think I’ll challenge them to a virtual reality duel….stab….I win!!!”

Let me remind you that this is a “real journalist” speaking and although the Star is a notoriously trashy rag, I don’t think it’s unreasonable to expect a certain minimal level of integrity in its reporting, even if only to the point of not passing off outright lies as real news and then making fun of people who call them on it. Is that really so baffling, Jerry?