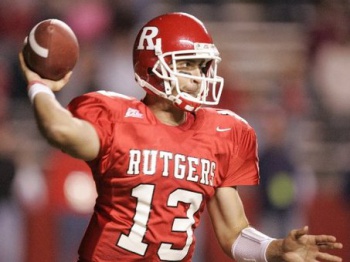 A Federal judge ruled that EA owes no compensation to former college players for using their likeness in NCAA Football games.

Sports games based on professional sports usually have agreements in place with player’s associations so that the athletes receive some compensation for their names and likenesses to appear. Games depicting college sports, the most common example is EA Sports NCAA Football series, have no such agreement with players because it is against NCAA rules for them to profit from participating in sports. That’s why NCAA Football doesn’t use real names, but EA still shows the player’s uniform number and a general likeness to players including height, weight, hair color, complexion as well as biographical details like high school.

In 2010, former Rutgers quarterback Ryan Hart sued EA for using these details in the game – including his appearance and signature left wristband – but his claim was dismissed by Judge Freda Wolfson of the New Jersey District Court in Trenton. In that ruling, Judge Wolfson allowed Hart to resubmit his complaint with a different wording. Unfortunately for Hart, his second submission was also dismissed by Wolfson today.

The ruling states that the First Amendment rights of EA Sports to make a game is more important than Ryan Hart’s control of his likeness. With the Supreme Court ruling that games are just as protected by the First Amendment as books and movies in June, Wolfson had to uphold EA’s rights.

Hart’s lawyer Keith McKenna didn’t have a comment on the dismissal, but EA was quick to gloat on the victory. This decision “validates Electronic Arts’ rights to create and publish its expressive works,” said Elizabeth McNamara.

I understand that Ryan Hart and other former college athletes like Arizona State quarterback Sam Keller are a little miffed that they will never receive compensation for kids being able to play as them in NCAA Football, but I think that’s just part of the deal with being a college athlete. It must doubly sting for those players who, for whatever reason, were unable to excel at the professional level, but the alternative is much worse.

Not only would we be forced to download roster updates with the real players names, but we’d have to mod each player’s likeness manually to match your favorite team’s roster. That’s just too much work.

Battlefield 3 Is “Grounded In Authenticity”