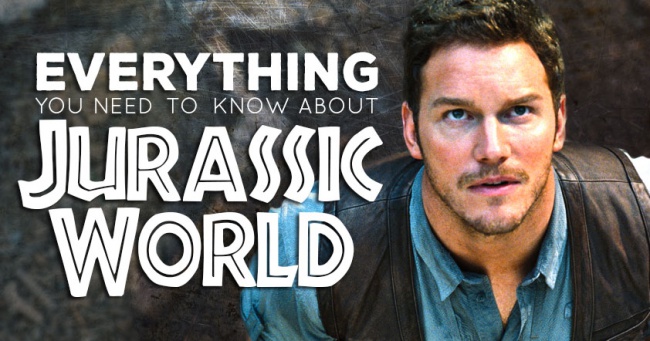 Jurassic World marks the fourth installment in the Jurassic Park franchise, and with it being the first chapter in over a decade, it can be tough to remember all the important details that came before. Or, perhaps you haven’t seen any of the previous films, but want to check out the new one. We’ve got you covered with this guide to the Jurassic Park series.

Jurassic Park, the movie that started it all. One of the movies often listed near the top of Steven Spielberg’s filmography. A theme park ride of a movie in which people get hunted by dinosaurs. Jurassic Park made a ton of money upon its initial release and has now spawned three sequels and a 3D re-release.

Dr. Henry Wu (B.D. Wong): The park’s chief geneticist, and the only character who returns in Jurassic World.

John Hammond has created a theme park/zoo on a tropical island that houses dinosaurs, which have been brought back from the dead thanks to cloning technology. In order to prove that the park is safe, he invites Alan Grant, Ellie Satler, and Ian Malcolm for a tour of the park to verify its safety. They are joined on the tour by Hammond’s grandchildren, Lex and Tim Murphy. Meanwhile, Dennis Nedry has been paid to steal dinosaur embryos from the island.

In order to save those stuck on the tour, Hammond and Ray Arnold reboot the computer system. Arnold doesn’t survive. Velociraptors begin to hunt the protagonists at this point, although with the power now back on, they’re able to call for help. The Tyrannosaurus rex pops up and kills the Velociraptors, allowing the protagonists to escape on a helicopter. Grant decides not to endorse Jurassic Park, a decision with which Hammond now agrees. This, however, did not stop The Lost World: Jurassic Park from being created.

There’s a reason that Jurassic Park is frequently mentioned on “best of” lists: it’s really, really fun. Sure, it doesn’t have a ton of ambition beyond being an incredibly fun ride of a movie, but it pulls that off so effortlessly. It has incredible visual effects – both CGI and animatronics – most of which hold up to this day, and it still has the potential to fill audiences with awe from start to finish. No, it’s not scientifically accurate, and its characters aren’t exactly the greatest, but it puts you on an island with dinosaurs, and that’s about the coolest thing a movie can do.

After Jurassic Park made all of the money, it only made sense for a sequel to be commissioned. Steven Spielberg waited for the original’s novelist, Michael Crichton, to write a sequel to the book before adapting it into a film. The film made enough money to justify a third, even though saying it’s not as good as the first movie is just somewhat of an understatement.

Dr. Ian Malcolm (Jeff Goldblum): One of the main characters of Jurassic Park. Returns in the sequel. A mathematician. Love interest of Sarah Harding.

John Hammond (Richard Attenborough): The creator of Jurassic Park. Grandfather to Lex and Tim Murphy. Uncle of Peter Ludlow. Survived the events of Jurassic Park and returns in the sequel.

Roland Tembo (Pete Postlethwaite): A hunter who wants to kill some dinosaurs.

Peter Ludlow (Arliss Howard): The new CEO of the company that created the original Jurassic Park. Nephew to John Hammond. The film’s villain.

Four years after Jurassic Park, John Hammond loses control of InGen, his company. We learn that there was a second site filled with dinosaurs: “Site B.” The dinosaurs on this island have been allowed to live, untouched, and outside of cages. Hammond hires Ian Malcolm and a new team to document what life is like on the island.

Upon arriving, the group finds a second InGen team touching down, this one led by Roland Tembo. The second team begins to capture and kill dinosaurs, much to the “good” group’s dismay. They rescue an infant dinosaur and try to fix its broken bone, only for its parents to attack the group. The Tyrannosaurus rexes wreak havoc on both groups’ camps, causing them to have to team up in order to survive.

The combined group gets chased by both Tyrannosaurus rex and Velociraptors, eventually leaving only the important characters alive. They escape the island, only to learn that a Tyrannosaurus rex was captured and brought back to the mainland. The ship on which it was transported crashes into the dock, and the dinosaur escapes. It turns out that InGen captured its infant, and it wants its baby back. Ian and Sarah rescue the baby and use it to lure the Tyrannosaurus rex onto a ship. Ludlow is killed. The dinosaurs are sent back to Site B, and the island is declared a nature reserve.

The Lost World: Jurassic Park gives us a silly and slightly convoluted set-up for its plot, and then ignores plot altogether by making these characters simply run away from dinosaurs for a couple of hours. Jeff Goldblum is lots of fun, but the supporting cast is bland, the dinosaurs aren’t as enjoyable as they were in the first film, and watching it feels more like a chore than it should. The awe that you feel during the first film isn’t present this time around. The CGI is worse, too, somehow. It wants to go bigger, but fails at almost every turn.

While not being the best movie out there, The Lost World: Jurassic Park made a lot of money, prompting a third to be made. This one was not based on a Michael Crichton novel, nor was it directed by Steven Spielberg. It still made money, but it was bad enough to kill the franchise for over a decade.

Dr. Alan Grant (Sam Neill): A paleontologist. The lead of the first film, he returns in the third.

Paul Kirby (William H. Macy): A “wealthy” businessman who lures Alan Grant onto the island to look for his son. Formerly married to Amanda Kirby.

Dr. Ellie Degler (Laura Dern): A paleobotanist who was a main character in the first film. Now married to Mark Degler.

Billy Brennan (Alessandro Nivola): A graduate student who accompanies his professor, Alan Grant, on the trip.

After a parasailing accident, Eric Kirby finds himself stranded on the island from The Lost World: Jurassic Park. His father, Paul, and his mother, Amanda, hire paleontologist Alan Grant to come to the island with them, despite his vehement attitude about never going there. He’s promised that they’re only going to fly over the island, but upon arrival learns the real plan, which is to land on it and search for the son.

Upon landing, the team almost immediately attempts to escape, only to have the plane knocked out of the air by a dinosaur. This forces their plane into a crash landing, and puts the group into survival mode – while also continuing to search for Eric. After being hunted by a bunch of dinosaurs, Alan is separated from the group, only to be rescued by Eric, who has miraculously survived for eight weeks on his own. The two try to locate the others, and are successful in doing so.

After being chased by more dinosaurs, and learning that Billy took a couple of Velociraptor eggs, the group locates a boat and a phone, calling for help in the process. The U.S. Marine Corps and Navy arrive to save the day, allowing everyone to escape.

No. It’s a mess without much of a plot or characters, mediocre acting, boring dinosaurs rendered with poor CGI, and it just isn’t fun. It’s worse than either of the previous two movies, and it simply is not a film that’s enjoyable to watch. These are supposed to be thrilling movies, but this one just bores.

It’s been over a decade since Jurassic Park III was released. It made significantly less money than it predecessors and was poorly received critically, so this makes sense. Now, people have largely forgotten about it, and the idea of a new Jurassic Park movie is something that’s almost worth getting excited about.

Dr. Henry Wu (B.D. Wong): Jurassic World’s chief geneticist. The only character returning from any of the previous films.

Why Should You Care?

The hook of Jurassic World, as far as I’m concerned, is that the characters have engineered a new dinosaur, and it’s what wreaks havoc on the characters. We haven’t really seen the new dinosaur in the trailers, and simply seeing what the filmmakers come up with should be exciting. The budget should allow for some good special effects, too. Sadly, this might be the type of movie whose message will be “thou shalt not tamper in God’s domain,” but it’ll hopefully be a fun ride along the way.

One of the most exciting things in the trailer was how Chris Pratt’s character teams up with Velociraptors. That seems like it should be fun for a few scenes, especially because it represents a change in teams for the dinosaurs. We haven’t seen them team up with humans before, and that change alone might be enough to make Jurassic World feel fresh.

Finally, I’m intrigued to see how Chris Pratt fairs in leading his second big-budget action franchise. He was lots of fun in Guardians of the Galaxy, but it was more of an ensemble film than one in which he’s front-and-center at any given moment. This time around, it looks like he’ll be exactly that. How he does will likely determine how viable studios see him as a leading actor.